One of the world’s biggest drug firms deliberately buried data showing one of its arthritis medications could slash the risk of Alzheimer’s.

Pfizer kept its finding under wraps for more than three years because, it claims, it didn’t believe the evidence was strong enough.

It found the link between Alzheimer’s and the drug Enbrel when analysing medical insurance claims in hundreds of thousands of people in the US.

People taking Enbrel, an anti-inflammatory used to treat rheumatoid arthritis, appeared to be 64 per cent less likely to develop the memory-robbing disorder.

But after years of discussion, the company decided not to reveal what it had found, according to a document seen by the Washington Post.

Experts are sceptical of the firm’s reasons not to share its ‘strong’ data at a time when scientists are deep into a quest to find an Alzheimer’s treatment.

One suggested money – and a desire to not let others capitalise – may have been behind the decision because Enbrel’s patent had almost run out. 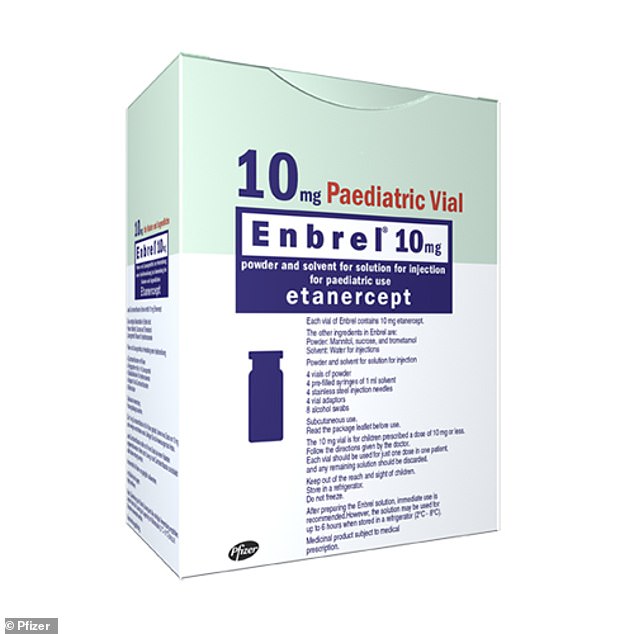 Internal documents from one of the world’s largest pharmaceutical companies, Pfizer, showed it found its rheumatoid arthritis medication, Enbrel (pictured) may be able to reduce someone’s risk of developing Alzheimer’s disease by as much as two thirds

Researchers working inside the $235billion (£184bn) company reportedly urged bosses to start a clinical trial to delve deeper into what they found in 2015.

After internal discussions, the New York-based company decided in 2018 not to go ahead with a trial, and not to tell the research community what it had found.

A PowerPoint presentation from a Pfizer meeting the same year, seen by the Post, read: ‘Enbrel could potentially safely prevent, treat and slow progression of Alzheimer’s disease.’ 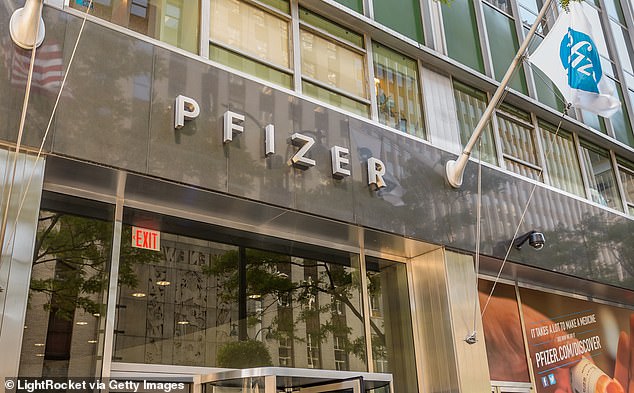 Pfizer, headquartered in New York (pictured), told the Washington Post it did not believe its findings were scientifically robust enough to publish

WHAT IS ENBREL AND HOW COULD IT TACKLE ALZHEIMER’S?

Enbrel is the original branded version of etanercept, an anti-inflammatory drug given as an injection to treat rheumatoid arthritis.

Rheumatoid arthritis is an agonising condition that affects around 400,000 people in the UK and 1.3million adults in the US.

Pfizer, the maker of Viagra, first patented etanercept under the name Enbrel in 1998. It was approved for use in the US in the same year.

However, several other drugs that contain etanercept are now available, after the drug giant’s patent ran out after 20 years.

Inflammation in the brain has increasingly become a target for Alzheimer’s researchers in recent years as they continue the quest to find a treatment.

Some believe Enbrel may be able to reduce someone’s risk of the condition or slow it down by limiting damaging swelling in the brain.

Pfizer itself admitted in an internal presentation, seen by the Washington Post, that ‘Enbrel could potentially safely prevent, treat and slow Alzheimer’s’.

However, past research on the effects of different types of anti-inflammatories on Alzheimer’s patients have found no evidence to suggest they work.

Defending its decision not to investigate the link further, Pfizer – the maker of Viagra – said it believed the chances of success for a clinical trial were low.

And it added the findings from its insurance claims analysis, which included hundreds of thousands of people, did not meet ‘rigorous’ scientific standards.

‘There’s a lot of interest, in Alzheimer’s research, in repurposing drugs and if you were to draw up a list of the top 10 with the most interest [Enbrel] would definitely be on there.

‘If companies find something like this they’ve got a responsibility to make it available as soon as possible.

‘We’re perfectly able to make up our own minds about whether it’s nonsense or not.’

Professor Howard said revealing the findings now was not too late but constituted a delay to a research field racing to find a treatment in the face of constant failures.

He added: ‘To be fair to drug companies they’re not saintly organisations and we have to understand they are commercial entities whose first responsibilities are to their shareholders.

‘But without them we wouldn’t have new drugs. I think they have a bigger responsibility to science.’

More than half a million people in the UK have Alzheimer’s, which is the leading cause of dementia and caused by the progressive death of nerves in the brain. 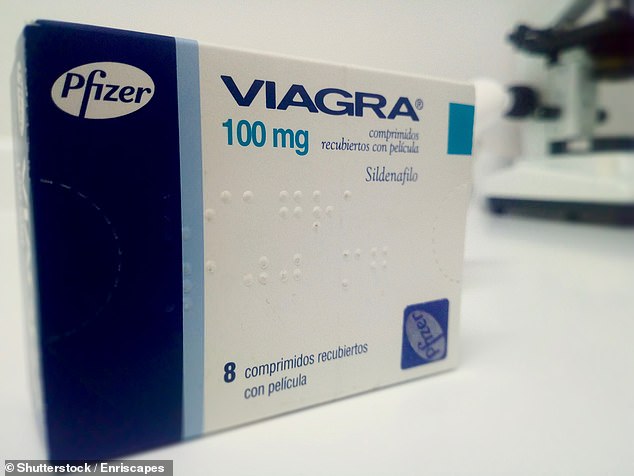 Defending its decision not to investigate the link further, Pfizer – the maker of Viagra – said it believed the chances of success for a clinical trial were low

WHAT DID THE PFIZER RESEARCH SHOW?

In 2015, Pfizer analysed of medical insurance claims from about 260,000 people with rheumatoid arthritis and other conditions.

It found people taking Enbrel – an anti-inflammatory drug – appeared to be around 64 per cent less likely to develop Alzheimer’s.

The pharma giant uncovered this link when it looked at what drugs patients with Alzheimer’s and patients without were taking.

Pfizer’s data revealed there were almost three times as many Enbrel patients in the non-Alzheimer’s group (302 versus 110).

Enbrel, an anti-inflammatory drug, may be able to reduce someone’s risk of the condition or slow it down by limiting damaging swelling in the brain.

However, past research on the effects of different types of anti-inflammatories on Alzheimer’s patients have found no evidence to suggest they work.

Pfizer said Enbrel molecules were too large to actually travel into the brain, according to the Washington Post, so its potential was limited.

But one researcher, Professor Clive Holmes of the University of Southampton, suggested market forces were behind Pfizer’s decision to keep its discovery hidden.

He told the Post the company would not have wanted to invest in research which its competitors could have used to make money. 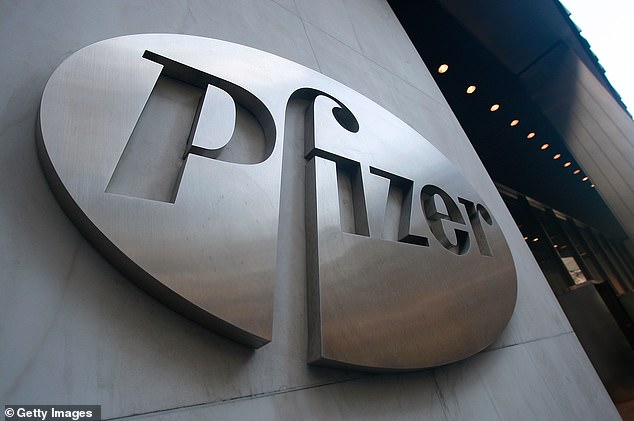 Pfizer said Enbrel molecules were too large to actually travel into the brain, according to the Washington Post, so its potential was limited

THE WAR ON ALZHEIMER’S: MORE THAN 150 TRIALS HAVE FAILED IN 20 YEARS

Scientists have for years been scrambling to find a way to treat or prevent Alzheimer’s disease, which accounts for around two thirds of the 50million dementia patients worldwide.

But attempts to tackle the brain-destroying disease have been beset with failures.

In March this year the pharmaceutical company Biogen abandoned two late-stage trials of a promising Alzheimer’s drug, aducanumab, which it hoped would work by clearing the brain of sticky build-ups.

After years of research and testing the company decided its prospects looked poor in the end stages of a human trial and pulled the plug, wiping $18billion (£13.8bn) off its own market value.

In January, the firm Roche announced it was discontinuing two trials which were in their third phase of human testing.

It was trying to develop crenezumab, which worked by preventing build-up of plaques in the brain and had already been proven safe, but wasn’t having the desired results.

Between 1998 and 2017 there were around 146 failed attempts to develop Alzheimer’s drugs, according to science news website, BioSpace.

Billions of dollars have been invested in the industry and a successful, marketable treatment would likely make a fortune for the company which gets there first.

Experts have said a difficulty in testing drugs on the right people may be partly to blame – Alzheimer’s is rarely diagnosed before it has taken hold and, by that time, it is often too late or studying people becomes too difficult.

For drugs which try to modify the course of a disease, trials often have to be longer and more in-depth, making them more difficult and costly, researchers wrote in the journal Expert Opinion on Investigational Drugs.

The same researchers added scientists may be struggling to find the correct dose of drugs which could work, and that they may be recruiting the wrong types of people to test them on.

The 20-year patent on Enbrel ran out in 2018 and other manufacturers can now make cheaper generic forms of the drug.

If they had known it could treat Alzheimer’s and Pfizer couldn’t get a new patent, the profits would had to have been shared across drug companies around the world.

Professor Holmes said: ‘Someone can pop up and say, “Look, I’ve got a me-too drug here”. I think that is what this is all about.’

The research which led to the discovery was an analysis of medical insurance claims from about 260,000 people with rheumatoid arthritis and other conditions.

When split into two randomised groups of people with Alzheimer’s and people without – 127,000 in each – there were almost three times as many Enbrel patients in the non-Alzheimer’s group (302 versus 110).

The charity Alzheimer’s Research UK said drug companies should make findings ‘as widely available as possible’ as part of their role in developing new therapies.

Director of research, Dr Carol Routledge, said: ‘Drug discovery is a complex process and the repurposing of drugs approved for other medical conditions offers a tantalising opportunity to investigate treatments already proven to be safe in people.

‘We must leave no stone unturned when it comes to finding a new treatment for dementia and we cannot do this alone.

‘Pharmaceutical companies play a crucial role in getting new medicines into the hands of patients and it’s important that they operate as openly as possible.

‘In cases where their research may seem to come to a dead-end, it’s still important that these findings come to light.’

Alzheimer’s disease is a progressive, degenerative disease of the brain, in which build-up of abnormal proteins causes nerve cells to die.

This disrupts the transmitters that carry messages, and causes the brain to shrink.

More than 5 million people suffer from the disease in the US, where it is the 6th leading cause of death.

As brain cells die, the functions they provide are lost.

That includes memory, orientation and the ability to think and reason.

The progress of the disease is slow and gradual.

On average, patients live five to seven years after diagnosis, but some may live for ten to 15 years.