In the simplest terms, that’s code for the BReast CAncer gene and is split into two categories: BRCA1 and BRCA2. Though we all have BRCA genes, they are believed to increase a person’s chances of developing the disease when mutated. Dr. Sunil Hingorani, a family friend and pancreatic cancer specialist, once told me “It doesn’t mean there isn’t a gene link, it just means they haven’t found the gene yet.” Eek. Then I thought, “Oh, maybe they’ll name it after us. Cool. Wait. Nope, not cool.”

After being told we weren’t BRCA gene mutation carriers, I morphed into a boob spy named Erin Boobivich to investigate exactly what the culprit was. My cousin believes it has something to do with the water in Connecticut. Not only had each of us lived there for at least 30 years prior to our diagnosis (Boobivich knows her number-crunching); it’s also home to some of the country’s highest breast cancer rates. My brother thinks the microwave we grew up using is to blame. My mom thinks my aunt got it from eating too much barbecue. I’m convinced it has something to do with potato chips. (What?! They’re a carcinogen! I read an article once and now I don’t eat potato chips). Okay, that’s the extent of my research, but it could be all or any of those things, plus a bag of genes.

Reasoning aside, what’s really worth sharing goes beyond statistics. Ultimately, breast cancer completely changed our lives collectively and individually. And while it’s important to share the commonalities weaved throughout, our individual experiences carry lessons that should be amplified, too.

My aunt, who left India for America in the ’70s, was diagnosed with HER2 neu positive, a very aggressive type of breast cancer. She had a lumpectomy (aka breast-conserving surgery that removes abnormal tissue) and more than 20 lymph nodes removed to determine if it had spread throughout her body. This was followed by debilitating chemotherapy that left her extremely ill for months. From the outside, you could never tell she was in pain because her sense of humor made cancer seem fun. She was always upbeat and cracking super inappropriate jokes, like the one where she called me in 2003 and joked her cancer was back, then cackled loudly and said she was kidding. Ha. Ha. 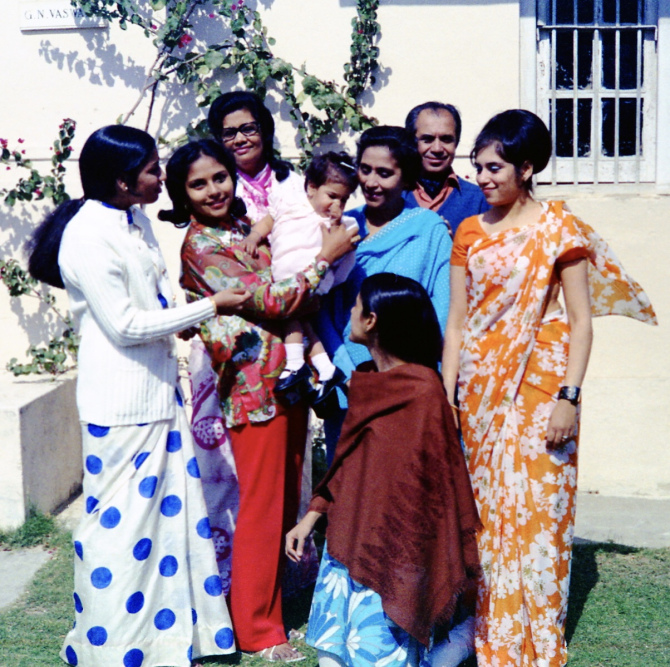 During chemo, she chose not to wear a wig, and instead wore headwraps and proudly flew bald. She just didn’t seem to care. Her hair never really grew back. If you ask my aunt to take a picture with you today, she will refuse, claiming she hates pictures. The truth is cancer changes how you feel about your body. Her hair didn’t grow back to its former glory, but thankfully, neither did her cancer. She just hit her 21 year clear MRI on October 8, 2019.

My mom’s cancer was hormone-based. She was told by a doctor that she would need a lumpectomy, radiation and chemotherapy. Our family friend Dr. Hingorani insisted she go to Dana Farber, a renowned cancer institute in Boston, for a second opinion. My mom balked at it, but my father and Hingorani insisted. It’s a good thing she listened. The doctors there confirmed chemotherapy wouldn’t be beneficial. At all. Had she gone through with it, she would have lost her hair and who knows what else…. for No. Benefit. At. All. With that being said, get second opinions. Get thirds. Make sure you have all the info you need.

By the way, after her lumpectomy and radiation, Mom was put on Arimidex, a drug specifically for post-menopausal women to reduce the risk of cancer coming back. She just hit 9 years clear and was told on October 9, 2019 that she no longer needs to take it. 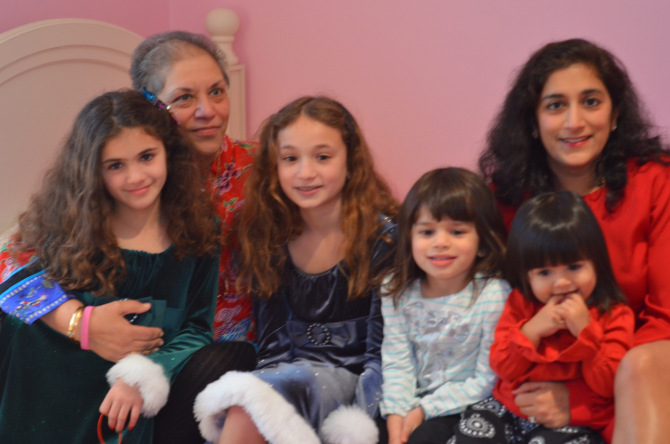 My cousin was diagnosed in November 2012 in early November and went through at least 5 biopsies well into 2013. Because her cancer was especially aggressive, a combo of lumpectomy, radiation, and chemotherapy was the only choice. At the time her children were 11, 9 and 7 years old, respectively.

At our Christmas dinner, a month before she began chemotherapy, I remember asking if I could get a picture of her, my aunt and the kids with my new camera. Priya responded, “Sure, since it’ll be the last time I have hair like this.” And she was right. Her hair has never returned to what it was that day.

She endured 8 rounds of chemo within 4 months and each infusion took 4 to 6 hours. We took turns accompanying her to Boston. Her husband, Douglas, did the first round. But when he tried to unplug the chemo machine to charge his Blackberry, let’s just say he wasn’t invited to return.

Priya’s hair fell out, her nails turned blue, and her eyebrows disappeared. My cousin is a very strong and stoic individual to a fault. She never wanted to admit she was in pain or needed help. I understood. With three young children, she didn’t want them to feel unsafe or think that their mother was dying. One morning she couldn’t protect them from what was going on, and while they were having breakfast, she fainted in the pantry. Thankfully, Douglas wasn’t charging his Blackberry, ran to the pantry, and moved the kids out of the kitchen so he could help her. He was scared. So were the kids. 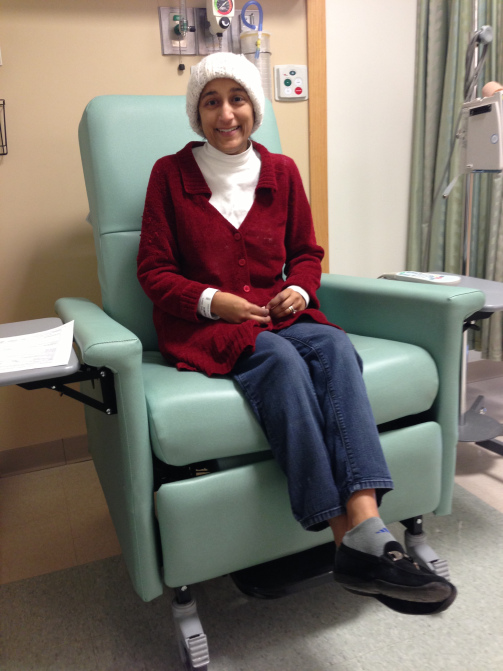 She was told that chemotherapy would only improve her chance of no recurrence by 3-5%. It seems like nothing right? But with three kids, she said she would do whatever was necessary. Today, she’s 7 years clear. But in addition to her hair thinning, chemo also affected her brain–specifically her attention span and memory. It took her two years to be able to get through a long book again. And like a lot of women, chemo threw her into early menopause at just 43.

My mother and I got the exact same type of cancer. Same boob. Same exact spot. Like mother, like daughter. The only difference was age; my diagnosis came much earlier in life (30 years before Mom, to be exact.) It sucked. I always thought I’d have children of my own. Unfortunately, this diagnosis changed that.

Prior to getting the bad news, everyone in my family begged me to get screened; specifically, after my cousin’s diagnosis. I finally did a year later. I thought there was no way I could to get cancer at such a young age. That’s what we all thought.

But then they saw something on my right boob. After two mammograms, 1 ultrasound and a biopsy, I got an all-clear. Phew. Relief. No cancer. But then something strange happened. In my right underarm, I got a swelling that was extremely painful. So on Christmas day, my uncle drove me around to see if we could find an urgent care center. The doctor who had previously ordered my biopsy, asked for an MRI. It revealed everything was fine on the right breast…and a tumor on the left. The latter was missed on two mammograms and an ultrasound.

My mom said when I called her on March 4, 2014 to break the news, it was one of the most shocking moments in her life. I remember bursting into tears and I’m not a crier. That doctor told me, “So listen, you can get a lumpectomy, radiation, maybe chemo. Or you can just get a mastectomy and not have to worry about any of that.” Wow. (That was the most glossed-over statement that was ever said to me). My cousin called Dr. Alexandra Heerdt, her breast surgeon at Memorial Sloan Kettering Cancer Center, who later told me a mastectomy wasn’t something she’d recommend.

By the time my lumpectomy was done on April 9, 2014, I had been through 2 mammograms, 2 ultrasounds, and 3 biopsies. Two days after my surgery, I developed cording, despite only having 3 sentinel nodes removed. It’s a traumatic reaction your body has when the muscles and nerves in that same area wrap around each other. It was one of the most painful experiences of my life and took 5 months of physical therapy to treat.

Radiation nukes everything. The doctors told me if I ever had kids, I wouldn’t be able to breastfeed on my left side. It also charred my boob and literally turned it black. Thankfully, my cancer had not spread, so chemotherapy was eliminated. However, I had to go on a drug (like Mom) to inhibit the hormones that caused my cancer in the first place.

My doctor initially recommended shutting down my ovaries for 5 years. What the ever loving?! Yes, that’s correct. He went over the side effects, which include but aren’t limited to hair loss, decreased libido, and joint pain. No thanks. So I talked to Dr. Rachel Freedman, my other doctor at Dana Farber (who also happens to be my cousin’s oncologist). She said the research wasn’t there to confirm ovarian shutdown as the best option. Instead, she recommended I start with Tamoxifen and if a new study was done on ovarian shutdown, I could switch. A few weeks later, a new study became available and my main oncologist’s recommendation aligned with Dr. Freedman’s.

He also said “pregnancy is a hormone storm for your body. You can’t for at least 5 years.” That was probably the hardest thing to hear. I chose to not freeze my eggs, because quite frankly, getting rid of cancer and going through treatment was enough to deal with at the time. I worry that I will regret this decision.

This year, I hit 5 years clear. I will have to take Tamoxifen for a total of 10 years, or until I’m 46. I’ll probably enter menopause shortly before or after that. It sucks. Thankfully, Tamoxifen hasn’t thrown me into early menopause; at least not yet. For this reason, I actually get excited for the period I used to curse each month. As long as I’m still getting it, maybe there’s still a chance I can have kids.

Word is, it’s #nationalcancersurvivorsday (or was oops, missed it by 15mins). Here are a bunch of survivor boobs. Aka my Aunt, Mom and cousin ? . . . #breastcancer #cancer #survivor

My cousin Priya has two daughters, Bella, age 16 and Emma, age 14. About 2 months ago, we were out to lunch with my Aunt Veena, their grandmother. The topic of breast cancer came up, and Emma, Bella and I made some jokes as our family is apt to do. My aunt looked horrified, and Emma lightly said, “What Nani? We know we’re probably going to get it.”

I hope they never join this club. And with research and progress over the next few years, maybe they won’t. Today, all of us are diligently scanned and have annual MRIs and mammograms. I have blood tests every 3 months. And when we get clear tests, we text our family group chat to report the news because we’re all scared on some level. The fear that it’s going to come back never goes away. Sometimes, the further I get from it, the more I fear I experience.

#tbt to 2014 when I left @marisafeehan a sticky note on her desk asking her to tie my shoe.

So cancer does change things. A lot. But with a good boob squad – friends, family, and doctors – it will be ok. My friends saved me when I was going through all of this. In fact, this post-it my friend Marisa found on her desk from 2014 says it all. (Seriously, if you get cancer, you can get your friends to do stuff for you). And remember, every day they are discovering new genes and new treatments. So get your mamms, ma’ams.