Parents, doctors and advocacy groups are demanding answers as to why spates of babies have been born in France missing arms and hands.

They met in Paris for the first time yesterday to discuss the mysterious birth defect, known as upper limb reduction, which is cropping up across rural regions of the Mediterranean country.

A panel of scientists has been brought in to ‘identify and analyse’ what is behind the scandal and will meet early next month.

Over the past 15 years, dozens of infants have been delivered in three regions, including Brittany, with missing or malformed arms.

The defects sparked a public health scare, with authorities admitting the rate of disabilities is ‘excessive’. 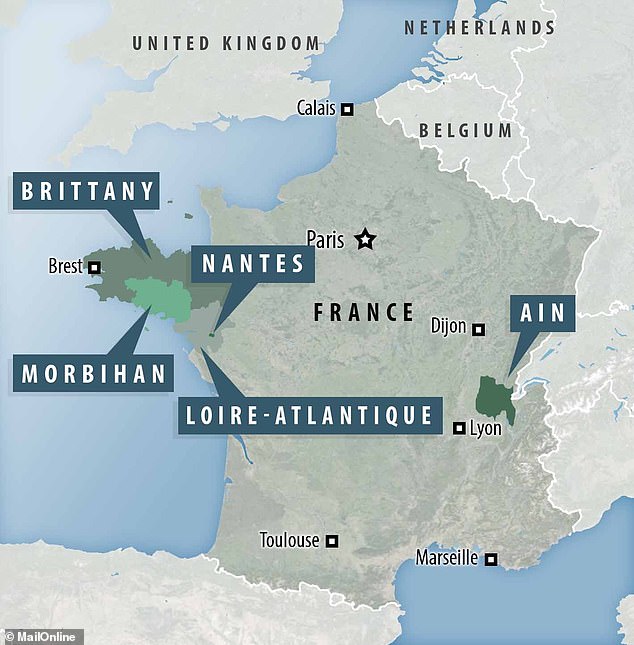 France launched an inquiry after a spate of babies have been born with deformities across the country. Dozens of infants were delivered with missing or malformed limbs in the past 15 years in the regions of Loire-Atlantique, Morbihan and Nantes, Brittany, and Ain, near Lyon

The issue came to light last September when France 2 Television reported an unusually high case of limb reduction in the eastern Rhônes-Alpes region between 2009 and 2017, France 24 reported.

At least seven babies were born with the defect in the rural area of Ain near the Swiss border, according to a 2014 report by the public health body Remera.

Remera was created after the thalidomide scandal by the national agency Santé Publique France (SPF) and is responsible for tracking birth defects.

Off the back of the cases in Ain, SPF announced on October 4 it was launching an investigation.

In total, more than 20 cases have been detected in the past 15 years in Brittany; Loire-Atlantique – south of Brittany – and Ain in eastern France.

Guidel, a town in Brittany, was identified as another problem area after the mother of one of three babies born with limb defects in the region between 2011 and 2013 alerted authorities.

Inquiries were also launched into the Brittany regions of Morbihan – where four women gave birth to babies with the defect in 2011-to-13 – and Nantes – where three cases occurred from 2007-to-08.

While SPF admitted cases were high in Morbihan and Nante, it initially claimed Ain’s incidences were no worse than the nation’s average.

According to Public Health France, around 150 babies are born each year with limb defects.

The agency put out a statement saying ‘the statistical analysis does not highlight an excess of cases compared to the national average’.

But health minister Agnes Buzyn said it was ‘unacceptable’ the investigation did not get to the bottom of the problem.

‘We are definitely facing an excess of cases,’ Remera’s director Emmanuelle Amar added. ‘We have the scientific and moral obligation to go further.’

Ms Amar was hailed as a whistleblower by ecologists and campaigners, but has also been accused of scare-mongering by fellow researchers.

SPF reversed its stance on Ain when 11 additional birth-defect cases came to light, however, these were not specifically upper limb, and also included kidney and feet abnormalities.

Public Health France promised to deliver a report into the scandal by January 31 this year, however, it was still not available in early February, Russia Today reported. 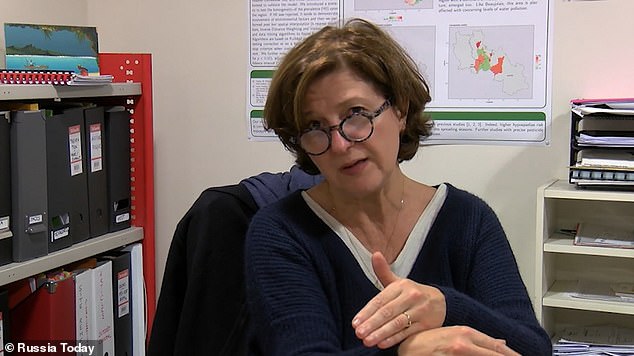 Emmanuelle Amar (pictured) was hailed as a whistleblower by ecologists and campaigners, but also accused of scare-mongering by fellow researchers, when she brought the issue to light. She is the director of Remera, which was created after the thalidomide scandal by the national agency Santé Publique France and is responsible for tracking birth defects

Speaking on why these incidents may have occurred, Ms Buzyn told the TV channel BFM last October: ‘We don’t want to exclude anything.

‘I want to know, I think all of France wants to know. Maybe it is due to what these women ate, drank or breathed in.’

Ms Buzyn added investigators will try to determine if the affected families have anything in common.

Remera has already tested the mothers of the affected for numerous substances they may have been exposed to during pregnancy, including drugs and excessive amounts of alcohol.

WHAT WAS THE THALIDOMIDE SCANDAL?

Thalidomide was the medication given to pregnant women to combat morning sickness between 1958 and 1961.

It was withdrawn after doctors noticed an increase in the number of deformed babies born to mothers who had been on the drug.

After a long battle, the families affected received total of £28 million in compensation, paid out by the drug manufacturer during the 1970s.

But no clear explanation has been found.

Doctors at Remera have pointed the finger at pesticides, noting several calves were born without tails or missing ribs in Ain at the same time as the affected babies.

Others believe the defects could be genetic.

Public Health France has previously said the abnormalities were ‘probably down to chance’.

‘We listened to their parents and their grandparents, visited the places where they live,’ Anne Gallay, a director at the body, said.

‘No environmental factors – pesticides, for example – could be questioned.’

However, Remera has dismissed the likelihood of the defects being down to chance as ‘more than infinitesimal’.

Data on France’s birth-defect rates is based on just a few regional registers, which only takes into account 19 per cent of the country.

There is no national register measuring limb-related birth defects throughout France.

This comes after thousands of babies around the world were born with missing or stunted limbs in the 1950s and 1960s, which was linked to the drug thalidomide.

MOTHER OF SEVEN-YEAR-OLD WHO WAS BORN WITH HIS LEFT HAND MISSING WAS TOLD ‘IT HAPPENS. WE WON’T HAVE EXPLANATIONS’

Melinda Mostini’s seven-year-old son Leo was born without a left hand and his arm partially missing.

The youngster was delivered at the Lorient hospital, Morbihannaise, in western France in October 2011.

Ms Mostini, who is also mother to 10-year-old Eva, discovered Leo had the defect during an ultrasound scan in June.

After she asked why, doctors reportedly told her: ‘It happens. These are accidents. We do not have explanations.’

And seven years on, medics are still clueless as to what caused Leo’s birth defect.

Melinda Mostini’s seven-year-old son Leo, from western France, was born without a left hand and his arm partially missing (both pictured with her daughter Eva, 10)

Ms Mostini told Le Télégramme: ‘I wish I could give Leo a real answer, just to explain why he has only one hand.’

But the youngster refuses to let his condition hold him back and simply tells friends his hand did not develop in his mother’s womb.

‘Leo has known how to tie his laces since kindergarten. He spent hours on the couch practicing!’ Ms Mostini added.

The youngster, who his mother calls a ‘little fighter’, has been horse riding since he was just four years old, and is a keen cyclist, swimmer and rugby player.

‘Children have the right to be curious but they are sometimes hard,’ Ms Mostini said. 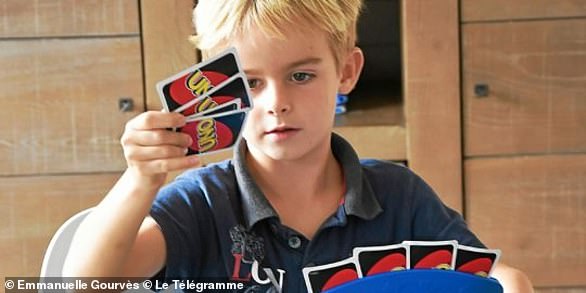 Leo refuses to let his defect hold him back and started horse riding at just four years old. But the keen cyclist, swimmer and rugby player still endures cruel comments

Leo has had his first consultation to have a prosthetic fitted after he did not take to one he was given as a toddler.

As part of the initial investigation into the problem, Ms Mostini was questioned by doctors as to her eating habits during pregnancy and what drugs she took.

However, no common thread was found between her and other affected families.

‘The question arises as to whether it could be environmental’, she told FranceInfo.

Referencing ‘fertilisers, pesticides’, Ms Mostini wonders whether something ‘happened at this time on the commune’.