Breast pumps mothers use to feed their babies may expose little ones to asthma-causing bacteria, research suggests.

A study compared infants fed via a pump to those who took on milk directly from their mother’s breast.

It found youngsters who are directly breastfed have a richer diversity and number of ‘good bacteria’ in their mouths.

And those fed via a pump have more ‘bad bugs’ that may raise their risk of ‘paediatric asthma’.

Babies may pick up good bacteria while sucking milk from their mothers’ nipples, while pathogens that live all around us may thrive on breast pumps. 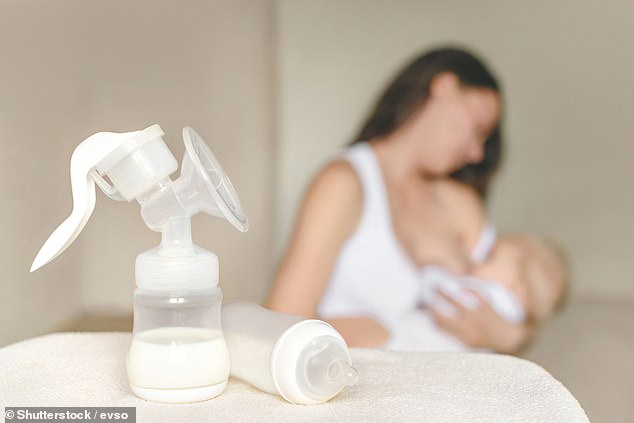 The research was carried out by the University of Manitoba, Canada, and led by Dr Shirin Moossavi, a PhD student studying medical microbiology.

‘Although previously considered sterile, breast milk is now known to contain a complex community of bacteria that helps establish the infant gut microbiota,’ the researchers wrote in the journal Cell Host & Microbe.

‘If this process is disrupted, the infant may develop a dysbiotic microbiota, causing predisposition to chronic diseases such as allergy, asthma and obesity.’

To determine whether pumps affect a baby’s microbiome, the researchers looked for bacteria genes in breast milk samples from 393 healthy mothers between three and four months after they gave birth.

Results revealed the milk administered via breast pumps contained higher levels of ‘opportunistic pathogens’, such as Stenotrophomonas and Pseudomonadaceae.

NO ALCOHOL IS SAFE WHILE BREASTFEEDING

No alcohol is safe while breastfeeding, research suggests.

Exposure to booze in breast milk reduces a child’s thinking and reasoning skills when they turn six or seven, a study found last July.

Study author Louisa Gibson – from Macquarie University, Sydney – said: ‘The safest option is to abstain from alcohol completely during both pregnancy and breastfeeding.

‘This study suggests there is no safe level of alcohol consumption, with every extra drink causing a little bit more harm.’

Opportunistic pathogens can usually be fought off.

But they take advantage of someone’s immune system being suppressed – such as when taking antibiotics – to cause infection.

And Pseudomonadaceae species have been linked to wound infections.

Respiratory infections in particular could increase a baby’s risk of asthma in later life, the researchers wrote.

This is because these infections cause inflammation of the airways, which makes them narrow.

In contrast, the study found babies fed milk directly from the breast had a greater number and diversity of microbes in their mouths.

One of these was the species Bifidobacterium, which has been linked to better digestion and a reduced risk of infections.

‘Gut microbiota is crucial in the development and education of the infant immune system,’ the researchers wrote.

‘And disruption of gut microbiota in the first few months of life is associated with atopy and asthma later in childhood.’