Chopra, 73, has spent his life advocating for the benefits of alternative medicine. His work has made him a bestselling author of more than 80 books, put him in a social circle that includes the Dalai Lama, and helped him amass more than three million followers on Twitter. 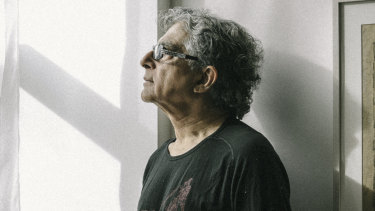 Chopra has written 80 books on how to achieve balance.Credit:Haruka Sakaguchi/The New York Times

Lady Gaga has called Chopra the most influential person in her life, and Alicia Keyes' had him officiate her wedding.

The doctor and self-help guru says he has never missed a day of meditation and yoga for the past 45 years. It helps him live a stress-free life, he said, but it's really because of his "inspiration."

"I'm always inspired by the idea of personal and social transformation so we can reach a critical mass of humanity in the direction of a more peaceful, just, sustainable and healthier world," he said. "As long as I keep that in mind then there is no stress. Stress only occurs when you think about yourself."

So, what is Chopra up to now?

He thinks spiritual health is another aspect of living a healthy life.

Poor mental health can not only increase the risk of suicide – which is the fourth leading cause of death for people ages 10 to 54 – but can also increase the risk for other types of physical health problems like heart disease, Type 2 diabetes or strokes, according to the Centers for Disease Control and Prevention.

"It affects every aspect of your life from your relationships to your job to your community and the world at large," Chopra said.

Despite his large following, the campaign didn't start with a tweet. It started with a documentary now called I Am Never Alone a few months ago that met its initial GoFundMe goal within a week.

Chopra said Wright asked him to participate in the documentary she was doing with Pascal to discuss suicide and mental health awareness. During their talks, she shared a personal story with him about her 28-year-old sister who committed suicide, he said. Moved by her story, he agreed to be in the film.

The film, which is completed but hasn't been released yet, is an opportunity to open a line of communication with others to address mental health and its connection to the rising suicidal toll in the country, he said.

The campaign, which is in the works of becoming a nonprofit, looks to share information and resources on what affects mental health, how it can be improved, and the ways to identify and decrease the risk of suicide.

"We think if you have a global community – both online and off line – that is dedicated to service, spiritual practice and emotional spiritual support, then we can actually change this epidemic of depression and suicide that is plaguing the world from celebrities to young kids," Chopra said.

Chopra, who has faced criticism for using medical and scientific terms like "Quantum Healing" during his alternate medicine lectures, videos and books, says the campaign will be encouraging young adults to find the treatments that will help them improve their mental health. This could be through prescribed medication or through breathing exercises like meditation and yoga, which Chopra recommends you do for at least five to 20 minutes.

He also thinks spiritual health is another aspect of living a healthy life. His new book, Meta Human: Unleashing Your Infinite Potential, explains how people can separate themselves from their "me" mentality and enter into a "higher state of consciousness."

The book, which plays on the superhero term for human with superpowers, matches the "Never Alone" campaign despite focusing on an independent idea. "Meta means beyond and human means, in this case, the condition of the human mind."

"Our true identity is that we are connected to each other, we are social beings and that is how it is meant to be," Chopra said. "That we do not think of ourselves all time, we think more in terms of love, compassion … (the world) is a projection of our collective selfishness right now and that gives rise to war, terrorism, ecotourism, extinction of species, climate change, mechanized death, nuclear weapons and leaders who … are all gangsters, mobsters that reflect our collective ego."