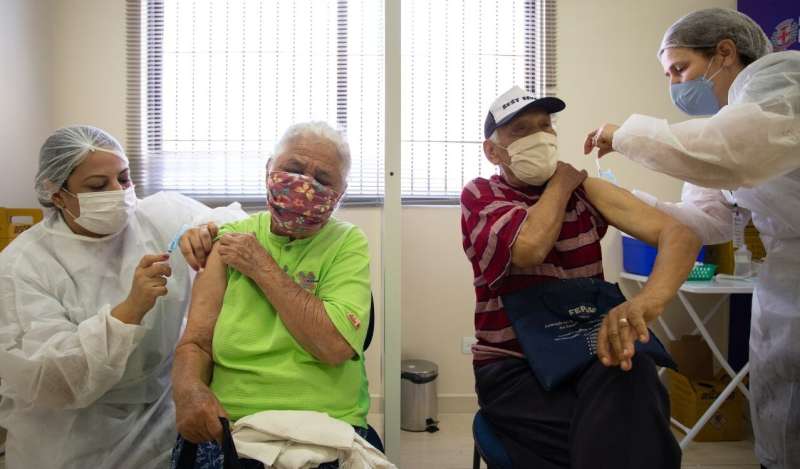 People who have recovered from COVID-19 still benefit from vaccination, according to a new study led by a Stanford Medicine researcher and colleagues in Brazil.

“We found clear evidence that COVID-19 vaccines are highly effective among people who have recovered from a previous infection, giving them benefits above and beyond the immunity they already have,” said Jason Andrews, MD, associate professor of infectious disease at Stanford and a lead author of the study.

Whether people who have recovered from COVID-19 need to be vaccinated continues to be debated.

The new study, however, indicates that immunization after infection provides additional protection. In more than 22,000 people in Brazil who were reinfected with SARS-CoV-2, the virus that causes COVID-19, the CoronaVac, AstraZeneca, Pfizer and Johnson & Johnson vaccines prevented 40% to 65% of symptomatic illnesses, the study found. The two-dose vaccines—CoronaVac, AstraZeneca and Pfizer—prevented 80% to 90% of hospitalizations and deaths from reinfection.

A paper describing the research findings published March 31 in Lancet Infectious Diseases. The other lead author is Thiago Cerqueira-Silva, MD, a doctoral student at the Federal University of Bahia, in Brazil. The senior authors are Julio Croda, MD, Ph.D., and Manoel Barral-Netto, MD, Ph.D., who are both investigators at the Oswaldo Cruz Foundation, a public health research institution in Brazil.

The researchers used databases maintained by the Brazilian government to identify people who tested positive for COVID-19 at least 90 days before being tested at a medical facility for symptoms of possible reinfection. There were 22,566 positive cases for COVID-19 reinfection and 145,055 negative cases, for a total of 167,621 case records included in the study. The records included people from different racial and ethnic backgrounds; 75% were under the age of 46, and 60% were women. The study consists of data from January 2021, when vaccines were first made available, to November 2021.

The records tracking COVID-19 illnesses, vaccinations, hospitalizations and deaths maintained by the Brazilian government provide a dataset big enough to accurately test how well vaccines protect people with prior COVID-19 infections against severe outcomes of the illness.

Four COVID-19 vaccines are available in Brazil: CoronaVac, which uses inactivated SARS-CoV-2 virus; the Pfizer mRNA vaccine; and the J&J and AstraZeneca vaccines, both of which use inactivated adenoviruses—common viruses that cause cold-like symptoms—altered to include snippets of the SARS-CoV-2 virus.

Each of the 22,566 positive cases was matched to some of the 145,055 negative cases based on age, sex, where in Brazil they lived and the date of the PCR test. The matched pairs were as similar as possible so that any differences in reinfection rates, hospitalizations and death could be attributed to the vaccines and not skewed by an underlying behavior like whether or not people routinely seek health care. This type of comparison is called a test-negative design and is recommended by the World Health Organization to evaluate how well vaccines work.

“The test-negative design can be thought of as identifying two people who live in the same city and are the same age and sex. They both became sick at the same time and went to a health care facility and were tested for COVID-19. One tested positive, and one did not,” Andrews said.

For each case, the researchers used Brazil’s national vaccination database to identify which vaccine was administered, if any, and how many doses had been given. This enabled the investigators to determine how effective each vaccine was against symptomatic COVID-19 illness and hospitalization or death.

“It is a bit surprising to be observing this many hospitalizations and severe outcomes in this population because it is younger. We can infer from the results of this study that 90% of the nearly 300 deaths could have been averted by vaccination,” Andrews said.

Despite the strong immune response mounted by people with prior infection to a first dose of an mRNA vaccine, just one dose of the CoronaVac, AstraZeneca or Pfizer vaccine was less effective at preventing hospitalizations and death than the full series. The first dose of CoronaVac was 35.3% effective at keeping people out of the hospital. Pfizer’s first dose was 61.8% effective, and AstraZeneca’s was 56.9%.

“Some countries consider one vaccine dose to be fully vaccinated for people with prior infection immunity, and these findings argue against that policy,” Andrews said.

“CoronaVac’s moderate effectiveness at preventing symptomatic infection is consistent with findings from clinical trials, but it is really effective for the things we care about—hospitalizations and deaths,” Andrews said. “This finding is really important for the many countries that are reliant on CoronaVac.”