The family of a ten-year-old boy battling cancer has to travel 120 miles every week for medical treatment.

Oliver Brown, from Plymouth, was diagnosed with a rare form of blood cancer two-and-a-half years ago.

The nearest treatment centre that can provide him specialist care is in Bristol – costing the family £120 for a return trip every week. 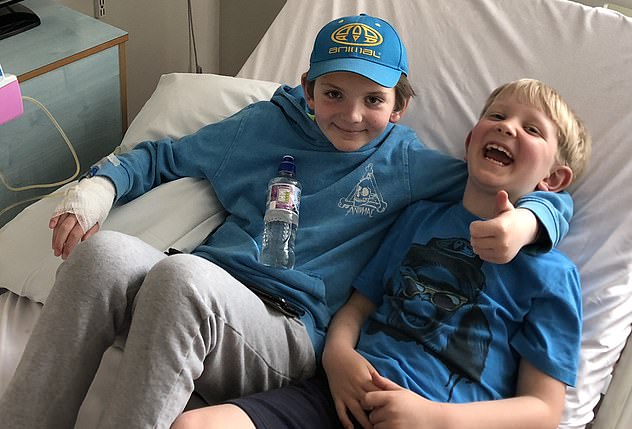 Oliver, pictured with his brother, is one of many young cancer patients who have to travel twice as far – and spend twice as much – on getting to and from hospitals than adults

Now Oliver’s parents have revealed they are struggling to pay the bills because of the travel and have had to dip into their life savings.

To make matters worse, Oliver’s mother, Nicky Brown, 49, has had to quit her job to be by her son’s side during treatment.

Her husband, Mick, 39, takes care of their younger son, Benjamin, seven, while earning the family’s only income. 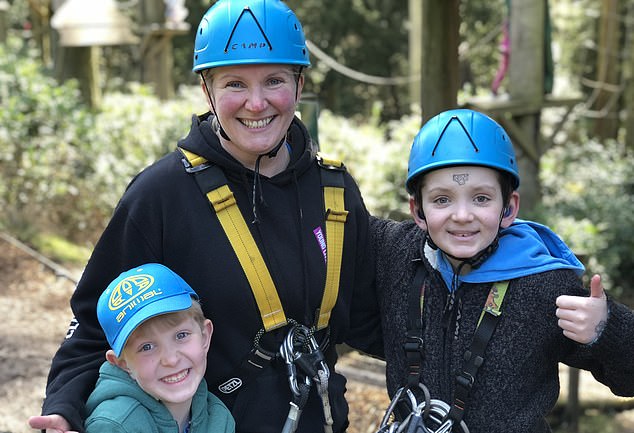 Oliver must travel from Plymouth to Bristol for specialist care, costing the family thousands. His mother Nicky Brown, above, has had to quit her job to be with Oliver, while her husband, Mike, cares for their other son, Benjamin, seven, whilst earning the families only income

Oliver was given the all-clear in May 2017 – around ten months after doctors made the heartbreaking diagnosis of myelodysplastic syndrome (MDS).

Oliver was given support by a charity called CLIC Sargent, which helps children with cancer.

Around 2,000 people in England are struck down with the rare form of cancer each year, according to figures, and an estimated 10,000 in the US.

Tests conducted earlier this year showed Oliver’s cancer had returned and he was forced to go back to Bristol Children’s Hospital for treatment in May 2018.

Oliver doesn’t produce enough red blood cells, and the stem cell transplants he receives are only available at the specialist hospital.

Mrs Brown said: ‘On a good day, the journey takes just over two hours each way.

‘But with the holiday traffic over the summer it has sometimes taken as long as four hours each way.’ 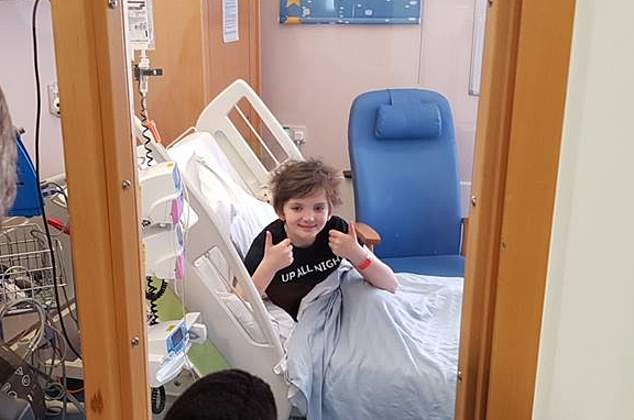 Oliver was given the heartbreaking diagnosis of myelodysplastic syndrome (MDS), a rare type blood cancer which affects bone marrow, in 2016. He relapsed in April this year

WHAT IS MYELODYSPLASTIC SYNDROME BLOOD CANCER?

Around 2000 people in England are struck down with the rare form of cancer each year, according to 2016 figures, and an estimated 10,000 in the US.

Bone marrow is where our blood cells are made. In MDS, the bone marrow doesn’t make enough healthy blood cells.

Symptoms can include feeling weak or tired, having lots of infections, and bruising and bleeding easily.

MDS is more common in people over 60, but it can happen at any age.

There are different types of MDS. Some develop slowly, but others are more aggressive. Some types of MDS have a greater chance of developing into acute leukaemia.

The best treatment will depend on the type of MDS, but the aim of treatment is to help to improve the blood counts and relieve symptoms.

Mrs Brown said: ‘It costs us £80 for a return trip – something we do every weekend. That’s before you even consider wear and tear.

‘We estimate with wear and tear it costs about £120 per journey.’

She calculated this has meant they have spent in the region of £3,680 on travelling since Oliver’s diagnosis.

Mrs Brown said: ‘We know that Bristol Children’s Hospital is a centre of excellence so Oliver needs to be there because he is getting the best care for his condition.’

Mrs Brown took a year off her job as a community engagement officer for a local charity during Oliver’s first treatment.

She returned for a few months. But after his relapse, she was told she wouldn’t be able to work remotely – forcing her to quit.

Mrs Brown tends to stay in Bristol during the week while her husband, Mike, a marine engineer civil servant, takes care of Benjamin.

They swap at the weekend so they can see their other child, seven-year-old Benjamin, very rarely spending time together as a family.

She said: ‘We very much had to tighten our belts. We’ve had to use savings. We are very fortunate in that we didn’t have debts coming into this.

‘But we also know that if this goes on a lot longer it will have significant consequences and we are going to end up in debt.

‘I did meet other families who have really struggled who haven’t been able to make that commute to spend time with their children in hospital.’ 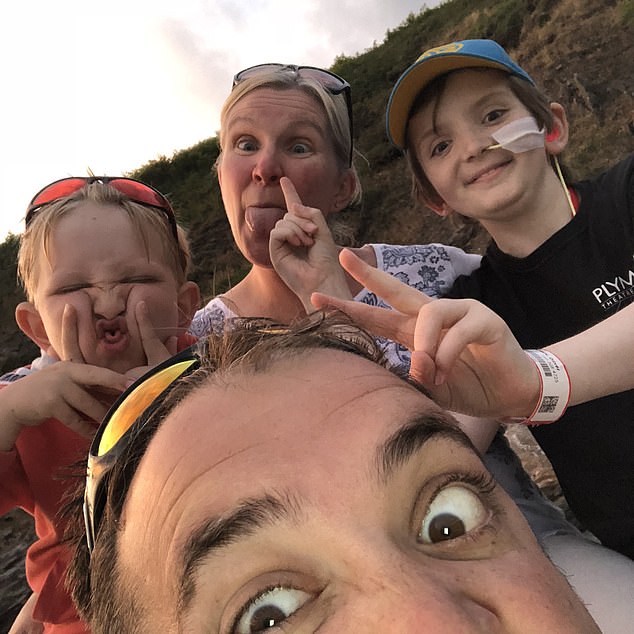 The family of a ten-year-old boy battling cancer who has to travel 120 miles for treatment has revealed they are struggling to pay the bills. Ten-year-old Oliver Brown, right, was diagnosed with a rare blood cancer in 2016. Pictured with his brother, Benjamin, seven

On average, a family of a child with cancer faces spending £600 a month extra on top of every day expenses and bills.

But a household income must be £16,000 or below to be considered for financial assistance.

A total of 40 per cent of parents, such as Oliver’s, said assistance from the government with travel expenses could help them cope better financially.

Mrs Brown said: ‘Not having any support with travel costs can really affect a family’s emotional wellbeing because it comes at a time when we are already anxious and worried, so it just another thing to add to the pressure.

‘It would make such a difference to people to not have to think about the cost of just getting to treatment.

‘Nobody asks for this to happen. Nobody wants to be in this situation.’

The main thing Oliver’s family hope for this year is to be together at Christmas.

Mrs Brown said: ‘It’s at the top of Oliver’s Christmas list. We will find out in a few days if he will need treatment over the holiday.

‘Its been really tough on Benjamin. They are very close as brothers. Having Oliver and I away in Bristol has had a real impact on his emotional well being. He was only five when it started,’ Mrs Brown said.

Although survival rates of cancer in children are over 80 per cent, cancer remains the single largest cause of death from disease in children and young people in the UK.

There are around 4,450 new diagnoses of cancer in children and young people every year in the UK. 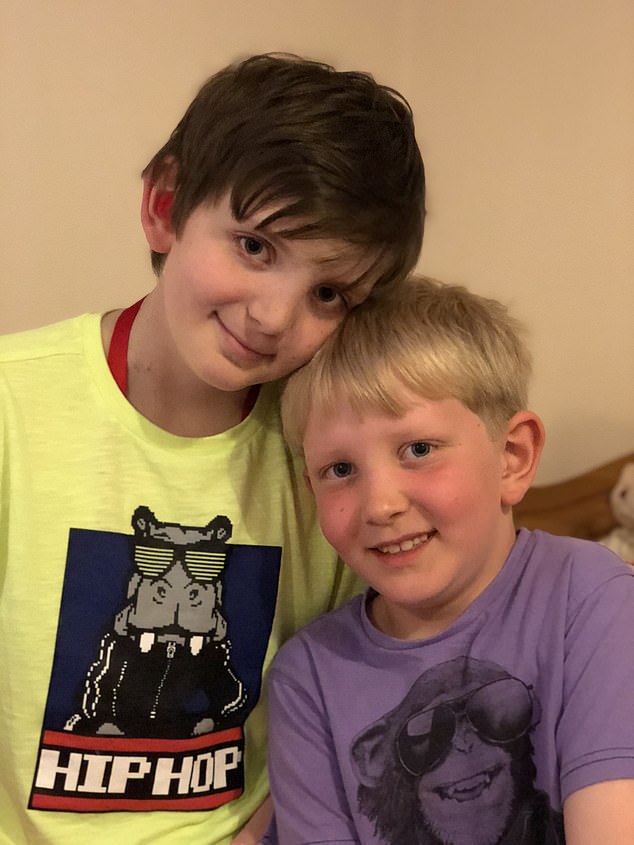 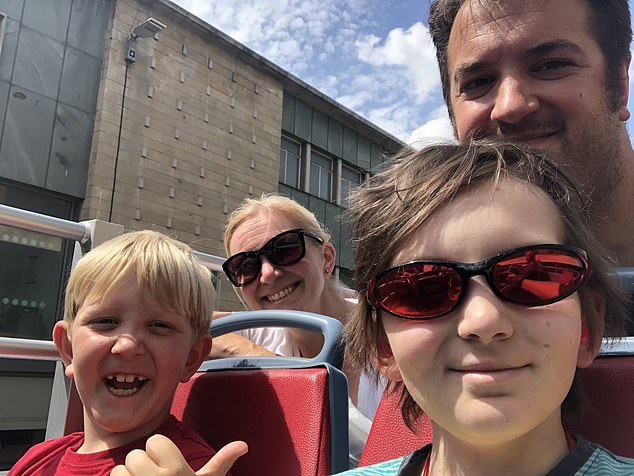 Kate Lee, CEO at CLIC Sargent, said: ‘The current Government travel cost scheme is not fit for purpose and available to too few families.

‘The NHS’ provision of universal healthcare is free at the point of need yet, in reality families are footing the bill for it.

‘On top of what can be years of treatment, countless back and forth to the hospital, there is the constant worry and need to have enough petrol in the tank and make sure the car is roadworthy so the family know they can make it to hospital whenever they need to.’

‘This is not good enough.’

Oliver’s family aren’t the only ones who are having to fork out hundreds of pounds a month on what has been dubbed their ‘cancer commute’.

Young cancer patients have to travel twice as far – and spend twice as much – on getting to and from hospitals than adults, research shows.

The average journey a family faces is a 60 mile return trip, according to CLIC Sargent, a leading children’s cancer charity in the UK.

This costs more than £180 a month on average, with treatment lasting up to three years.

The charity accumulated 30,000 signatures in three weeks on a petition which launched in September.

After calling for a £5million annual fund to be made available for families with children with cancer, Shadow Health Secretary Jon Ashworth announced Labour’s commitment to setting up a Young Cancer Patient Travel Fund.

Oliver was supported by CLIC Sargent and his donation fund page set up to support the charity can be found here. You can also donate to CLIC Sargent directly here.