A study of more than 2.2million people found infants who catch an infection of the central nervous system within the first year of life are 20 per cent more likely to be convicted as adults.

CNS infections include meningitis, encephalitis and the herpes virus, which can also cause cold sores.

Infections activate the immune system, which triggers inflammation as the first line of defence against invading bacteria or viruses.

Researchers from Sweden believe this inflammation affects the development of regions of the brain responsible for regulating aggression or violence. 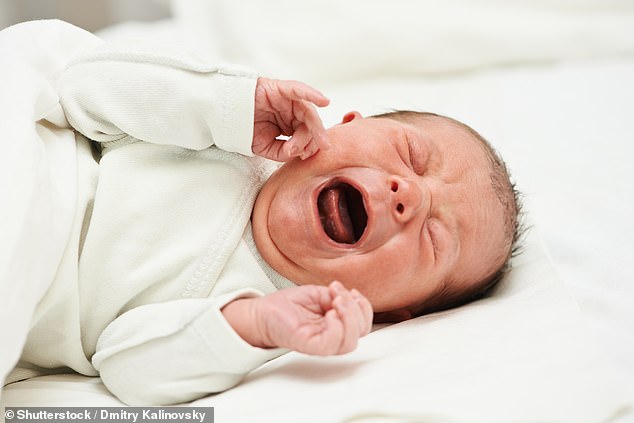 The research was carried out by the Karolinska Institute, Stockholm, and led by Åsa Blomström, of the department of clinical neuroscience.

The extent to which violent behaviour stems from genetics or surroundings, or a combination of the two, is a long raging debate.

Infections in early life have been linked to everything from blindness and deafness to mental disabilities and even just mildly impaired cognitive function.

But no studies had before looked at whether brain infections as babies are linked to committing violent criminal acts as adults.

The participants’ medical records were checked to determine the number of infections they endured before turning 14.

These were then compared against any convictions listed on the Crime Registry that were carried out between the ages of 15 and 38.

Results – published in the journal Brain, Behavior and Immunity – revealed the participants who were hospitalised with an infection as children were 14 per cent more likely to be convicted of a violent crime in later life.

WHAT ARE THE POSSIBLE COMPLICATIONS OF MEASLES?

Most people will recover from measles within one or two weeks, but complications can develop.

People most at risk of complications include teenagers and adults, babies younger than one year old, and children with a weakened immune system.

Common complications include diarrhea and vomiting, a middle-ear or eye infection, laryngitis, fits caused by a fever, and lung infections such as pneumonia, bronchitis and croup.

About one in every 15 infected children will develop one of these.

Rare complications include serious eye disorders which can lead to vision loss, heart and nervous system problems, and a fatal brain infection called subacute sclerosing panencephalitis – this is very rare and only happens in one in every 25,000 cases.

Having measles during pregnancy increases the risk of the baby having a low birth weight, premature birth, or stillbirth or miscarriage.

And infections that occurred during the first year of life, raised the risk by 20 per cent.

The first 12 months is the most important time for brain development.

It is also when synapses – the structures that allow nerve cells to transmit electrical information – production peaks.

Results further revealed infections that affect the central nervous system also raised the risk of a violent future by 20 per cent.

But infections that struck the rest of the body carried no such risk.

This may be due to CNS infections typically being ‘more severe’, with a higher risk of death, the authors wrote.

The type of infection does not appear to be important, with viruses and bacteria raising the risk by 10 and 13 per cent, respectively.

All the results remained true even after the researchers adjusted for factors like parental education, income and having convictions themselves.

Of the participants who had been convicted, 85 per cent were male and 32.1 per cent had a psychiatric disorder.

This is compared to the 11.4 per cent of the participants who had a mental illness but no violent past.

As to why infections have this effect, studies have shown the abnormal development of the frontal cortex of the brain affects our moral judgement in later life and may make us less empathetic.

And separate research suggests hostile, aggressive adults have higher levels of immune-fighting proteins in their blood.

These proteins may cross the blood-brain barrier, hindering the vital organ’s development.

The Swedish researchers note they do not know how severe the participants’ infections were.

However, they assume they were relatively serious given that they resulted in hospitalisation.

Although the scientists adjusted for factors such as parental education and income, they did not have access to information on potential childhood neglect.

Childhood neglect may raise the risk of both infections and violence in later life, they note.

Having a parent with a violent conviction themselves was linked to a participant being involved in crime, however, this may be genetic.

For example, mutations to the CDH13 gene have been associated with extreme violent criminal behaviour, as well as an increased risk of ADHD.