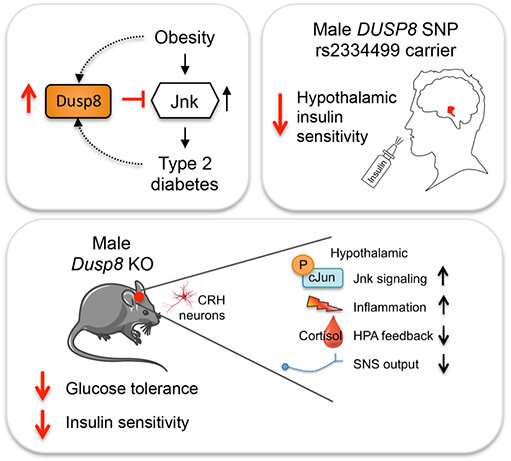 The brain plays a major role in controlling our blood glucose levels. In type 2 diabetics this glucose metabolism brain control is often dysfunctional. Genetic components for this phenomenon have so far remained elusive. A group of scientists at Helmholtz Zentrum München and the German Center for Diabetes Research (DZD) have now shown in the Journal of Clinical Investigations that in men a genetic variant of the gene DUSP8 can increase the risk for type 2 diabetes by impairing our brain response to the hormone insulin.

Insulin is a pancreatic hormone that controls our blood sugar levels. Insulin not only stimulates the uptake of glucose from blood into peripheral tissues, it also acts on the brain, specifically the hypothalamus, to control glucose and energy metabolism. In obese subjects, insulin loses some of its activity due to the activation of inflammatory signaling and a subsequent impairment of the cellular response downstream to the insulin receptor. This phenomenon, termed insulin resistance, is a major hallmark in the development of type 2 diabetes, but to date not yet fully understood. Recent genome-wide association studies (GWAS) identified DUSP8 as type 2 diabetes risk gene. Now, scientists have investigated how the protein Dusp8 (dual-specificity phosphatase 8), which is encoded by the DUSP8 gene, regulates glucose tolerance and insulin sensitivity.

“Carriers of a genetic variant of the gene DUSP8 were shown to have a moderately increased risk for type 2 diabetes, but the functional importance of Dusp8 for the etiology of the disease remained unknown,” explains Dr. Sonja C. Schriever, lead author of the study. “By combining cellular models, Dusp8 loss- and gain-of-function mice and functional magnetic resonance imaging (fMRI) of humans with genetic variants in the gene DUSP8, we now exposed a specific role of the protein Dusp8 as a gatekeeper for systemic glucose tolerance and hypothalamic insulin sensitivity,” adds colleague and senior author Prof. Dr. Paul Pfluger. Within the framework of the German Center for Diabetes Research (DZD), both scientists formed a team of biologists, epidemiologists and clinicians that was able to unravel the molecular mechanisms that link Dusp8 with the development of type 2 diabetes.