Britain has waited for nine months, since Meghan Markle married Prince Harry in a frothy, celebrity-packed confection of a wedding, to see what the new Duchess of Sussex wanted to talk about.

The answer, it emerged Friday, was — at least in part — menstruation. 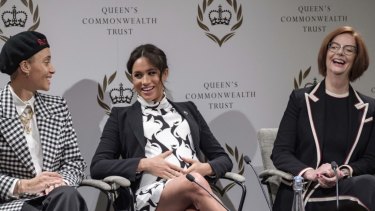 Meghan Markle, the Duchess of Sussex, and former Australian prime minister Julia Gillard talked about the importance of education for girls and reducing barriers to accessing leadership positions.Credit:Kensington Palace

At a panel convened by the Queen's Commonwealth Trust in honor of International Women's Day, the duchess said self-consciousness around the topic hurts young women in many developing countries, who can be withdrawn from school or forced to use "old rags, literally," because they cannot get sanitary pads.

"At the end of the day, we're doing our part just to normalize the conversation," she said. "That's the first step. This is 50 percent of the population that's affected by something, that can also end up creating the most beautiful thing in the world. So it's a strange one that it's ended up becoming so stigmatized."

It was the first lengthy, unscripted appearance since the wedding for Markle, who is now one of the

most scrutinized women in the world. A central question about her adjustment to life as a member of the royal family is how she — an outspoken, 37-year-old American professional woman — will manage the traditional royal ban on expressing opinions on political matters.

On Friday, when she was appointed vice president of the trust, she did not play it entirely safe.

"You've heard the duchess herself on the subject of periods, of menstruation, being very matter-of-fact," said Anne McElvoy, a journalist who was chairwoman of the panel. "I can say, growing up in Britain, if a member of the royal family had talked about periods 10 years ago, I think I would have fallen off my chair.

"I think she has kind of moved the dial," she added. "I think the rewards now very clearly outweigh the risks."

You can be feminine and a feminist. You can be masculine and understand that your strength includes knowing your vulnerabilities.

Equally interesting were the questions the duchess chose not to answer. She did not want to comment on how her mixed-race background had affected her. And she was restrained when asked about being targeted by threats and abuse over social media, a phenomenon that has so alarmed palace officials that this week they released the first-ever set of social media guidelines.

Instead, the duchess said, repeatedly, that she had stopped reading social media about herself.

"No," she said, when asked if she ever looked at Twitter. "Sorry, no. That is my personal preference. But I do read The Economist."

She was less restrained when she was asked about feminism, saying that both men and women must let go of rigid conceptions of gender.

"You can be feminine and a feminist," she said. "You can be masculine and understand that your strength includes knowing your vulnerabilities."

In marriage, "there's nothing threatening about a woman coming up to the same level," she said. "I hope that men are part of that conversation. My husband certainly is."

She also noted that she had been watching a documentary about feminism on Netflix and had been struck by a comment by a pregnant woman who said she felt "the embryonic kicking of feminism."

As a royal bride, Markle — a divorced, biracial American actress — represented a startling change for the British monarchy.

Raised as a political activist, she likes to remember the campaign she undertook as an 11-year-old, lobbying Procter & Gamble to withdraw an advertisement, for dishwashing liquid, that she thought was sexist. After a career in film and television, she is at ease in the glare of celebrity. Before she began dating Prince Harry, she shared fashion, travel and cooking tips on her lifestyle blog, The Tig.

All this proved jarring for older monarchists, who value the conservative traditions the queen represents, like emotional distance and meticulous political neutrality. And some royals-watchers have already chided her for straying too far into politics by endorsing a campaign by black academics and students to "decolonize the curriculum" and confront racism on university campuses.

"She's been very vocal in the past, before she got involved with Harry, but she can't do that anymore," said Dickie Arbiter, a former media adviser to Prince Charles. "It's probably extremely difficult for her, having been in that scenario where she could express an opinion. She's managing it as best she can."

Columnist Stephen Glover, writing in The Daily Mail this week, complained that Prince Harry had absorbed too many of "Meghan's politically correct and right-on views."

But her audience Friday offered full-throated support, not least for providing such a visible platform for women's difficulties around menstruation.

One invited guest, Alex Holmes, deputy chief executive of the Diana Awards, said he hoped it would prompt more institutions to provide sanitary products for their own employees.

"I really wanted to ask what does Kensington Palace do around this issue for its own staff," he said.