In March, during the first week of the San Francisco Bay Area’s first-in-the-nation stay-at-home order, KHN spoke with emergency department physicians working on the front lines of the burgeoning COVID-19 pandemic. At the time, these doctors reported dire shortages of personal protective equipment and testing supplies. Health officials had no idea how widespread the virus was, and some experts warned hospitals would be overwhelmed by critically ill patients.

In the end, due to both the early sweeping shutdown order and a state-sponsored effort to bolster the supply chain, Bay Area hospitals were able to avert that catastrophe. The region so far has fared much better than most other U.S. metro regions when it comes to rates of COVID infection and death. Even so, with intensive care unit capacity dwindling to critical levels statewide, San Francisco on Thursday issued another drastic order, announcing a mandatory 10-day quarantine for anyone returning to the city who has spent time outside the region.

Amid this fierce second surge, we circled back last week to check in with Dr. Jeanne Noble, director of the COVID response at the University of California-San Francisco medical center emergency department, to get her reflections on the Bay Area’s experience. She explained how even as her hospital has made so many improvements, including recently launching universal testing so that everyone who comes to the emergency room is tested for COVID-19, the lockdown and burnout are wearing on her and her colleagues. The conversation has been edited for length.

Q: How are you doing at UCSF right now?

We’re OK in terms of our numbers. We have our ICU capacity; today’s numbers are 74% occupied. Acute care is a little bit tighter; the emergency department is seeing an increase in patients. [Editor’s note: As of Sunday, ICU capacity had dropped to 13%.]

We did have a period of time before this last surge where we often had a few days with no COVID patients. That was great. That ended in late September. This morning we have 11 patients on ventilators in the ICU.

I think we’re the first hospital in the state for universal testing. Everyone who comes to the ER gets tested. I’ve been working on this for months, but it’s new this week. Now we have testing, so we don’t have to do so much guesswork.

Q: When we spoke during the week of the first stay-at-home order, back in March, you were very worried. How do things compare now?

The supply [of masks] is just much better than it was back in March. In March, we had furloughed engineers from our local museum, the Exploratorium, making us face shields, and we started a makers lab in the library across the street to make supplies. It doesn’t feel like that this time around. We have a longer horizon.

I think in terms of our COVID care and our hospital capacity, we are fine. But my own sort of perspective on all of this is: When are we going to be done with this? Because even though things are smoother — we have PPE, we have testing — it’s a tremendous amount of work and stress. Frankly, the fact that my children have not been in school since March is one of my major sources of stress.

We’re all working way more than we ever have before. And nine months into it, the adrenaline is gone and it’s just purely exhausting. 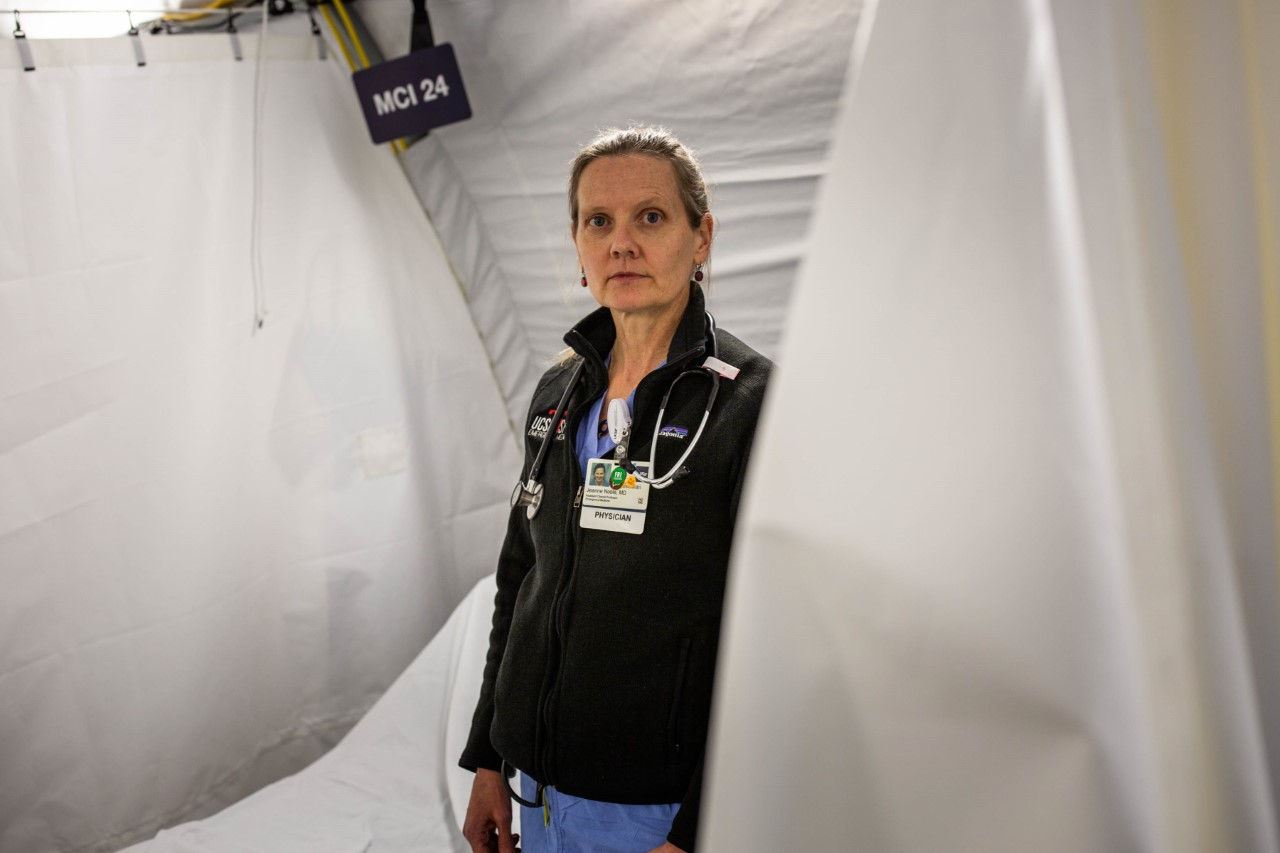 Q: Can you tell me more about that, the physical and emotional toll on the hospital staff?

We don’t allow eating in the ED anymore, so we don’t have break rooms. Especially if you’re the supervising doctor, you need to do this elaborate handoff to another doctor if you need to eat. You know, it’s 10 hours into your shift and you want a cup of coffee.

The hassles and the discomforts. Wearing an N95 day after day is really uncomfortable. A lot of us have ulcers on our noses. They become painful.

And the lack of being able to socialize with colleagues is hard. The ED has always been a pretty intense environment. That’s offset by this closeness and being a team. All of this emotional intensity, treating people day after day at these incredible junctures in their lives — a lot of the camaraderie and morale comes from being able to debrief together. When you’re not supposed to be closer than a few feet from one another and you don’t take off your masks, it’s a lot of strain.

People are much less worried about coming home to their families. It hasn’t been the fomite disease we were all worried about initially, worried we’d give our kids COVID from our shoes. But there’s still the concern. Every time you get a runny nose or a sore throat you need to get tested, and you worry about what if you infected your family.

Q: So will you and your colleagues be able to take a break over the holidays?

We’ll see what happens. We’re just now starting to feel like we’re seeing the post-Thanksgiving numbers. But I think that even without having to do extra shifts in the ED, certainly for someone like me doing COVID response, there’s always a huge number of issues to work through. We just got the monoclonal antibodies, which is great, but that’s a whole new workflow.

I think what is going to bother people the most is that we are in lockdown. Kind of longing for that relaxation and time with family that we’re all kind of craving.

Q: It sounds like things are hard, but the hospital is in a relatively good place.

I was deployed to the Navajo Nation and helped with their surge in May in Gallup, New Mexico, and that is much, much harder than what we’ve faced in the Bay Area. In Gallup, at Indian Health Service, they were incredible in just the can-do attitude with way fewer resources than we have here. As of this summer, they had had the worst per capita surge in the country. They redesigned their ED essentially by cutting every room in half, hanging plastic on hooks you would use to hang your bicycle wheel. They hung thick plastic and right there doubled their capacity of patients they could see.

Our tents at UCSF are these blue medical tents with HVAC systems, heaters, negative pressure. They are really nice. There they had what looked like beach cabanas — open walls with just a tent overhead. In March and April they were taking care of patients in the snow. In the summer, it was hot and windy. When I was there, almost every single one of my patients had COVID.

That level of intensity was not something we had to go through in the Bay Area. Not to say that it’s easy [here]; I just told you all the ways it’s hard. But everything is relative. In terms of the COVID landscape, we have been very lucky.

Q: The Bay Area was early to close and has had stricter regulations than many parts of the country. As someone directly affected, what do you think of the response?

I think that we have benefited from early closures, unquestionably, when we did our shelter-in-place in March and probably saved 80,000 lives. It was really a tremendous and a bold move.

We’ve done some things well and other things not so well. We were very late to implement closures in a targeted fashion. Restaurants and dining reopened this summer, and a lot of us couldn’t figure out why indoor dining was open. Why is indoor dining something we need to even be considering when we’ve just barely flattened our curve? It was very predictable that cases would go up when dining happened. And they did.

We need to evaluate what is more important for our society and well-being, and to say what is the risk associated with that activity. Schools are of high social value. And [the closures are] really hard for kids. We’re seeing a lot of adolescents with suicidal ideation brought to the emergency department, which is related to school closure. I would put dining and restaurants as being of minimal social importance and very high risk.

We could have done this better. Closing [down society] when numbers go up is reasonable and that saves lives. But I think we know enough that it should not be an across-the-board closing. I mean, with this latest order, they temporarily closed [park playgrounds]. And we’ve been telling people to go outside. It’s like, what? Are you kidding?