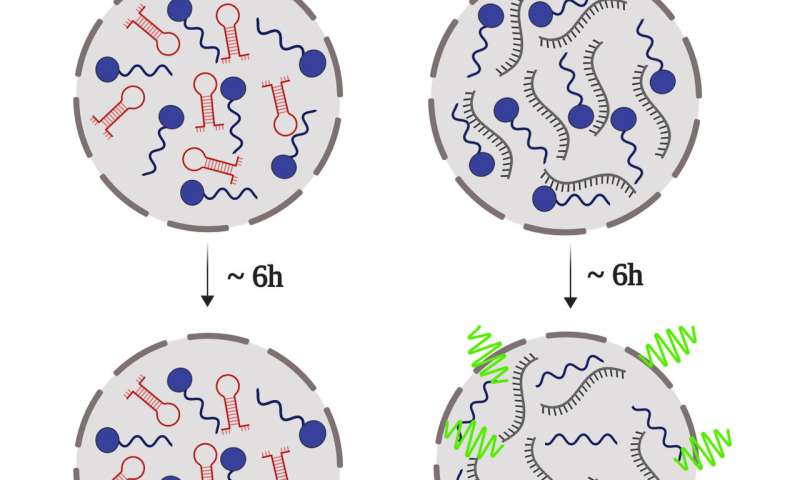 Researchers at the Federal University of Rio de Janeiro (UFRJ), in Brazil, have identified that the interaction between prion proteins and DNA may be behind the formation of protein amyloid aggregates and of the emergence of neurodegenerative diseases such as Creutzfeldt-Jakob disease and other spongiform encephalopathies. The study appears today in the FASEB Journal.

Led by UFRJ Professors Yraima Cordeiro and Anderson Pinheiro, the scientists have found that the prion protein (PrP) suffers liquid-liquid phase separation, and that this mechanism is finely controlled by some DNA sequences. In a process similar to oil droplets dispersed in an oil-water emulsion, the DNA leads PrP to form liquid droplets, turning it into a gel-like state or even changing them into a solid. They have also observed that these properties depend on the conformation of the DNA aptamer (a hairpin or extended conformation) and on the stoichiometry of the protein-nucleic acid interaction.

The process of turning liquid droplets into a solid state could explain the formation of abnormal and irreversible clumping of the prion protein, known as amyloid aggregates. These structures are toxic to the brain and are related to the development of transmissible spongiform encephalopathies, such as the Creutzfeldt-Jakob disease and the bovine spongiform encephalopathy (BSE), commonly known as mad cow disease. The link between amyloid aggregates and the diseases has been known for years, but how these structures form remains unclear. The study brings insights that might help answer this question.