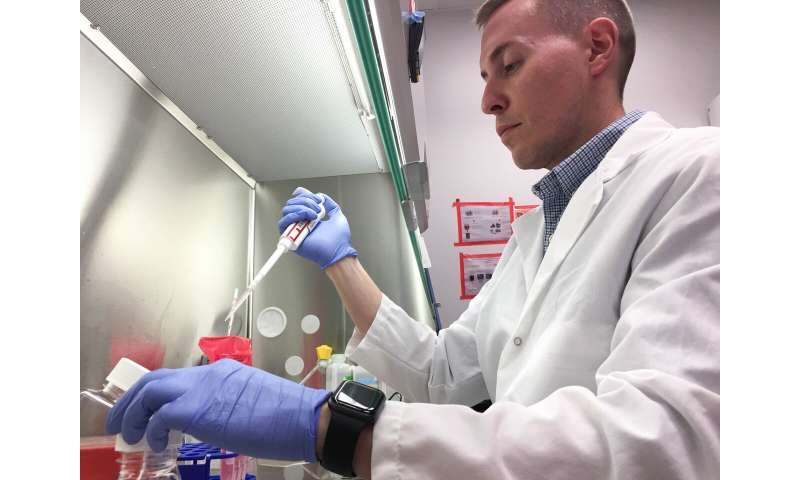 People with severe flu sometimes develop life-threatening heart problems, even when their hearts have been previously healthy, but the reason for that has been poorly understood.

For the first time, research in mice has shown a link between a genetic mutation, flu and heart irregularities that researchers say might one day improve the care of flu patients. The study, led by Jacob Yount at The Ohio State University, appears in the journal Proceedings of the National Academy of Sciences.

Mutations in a gene called IFITM3 are known to increase the risk of flu hospitalizations and deaths in people. The gene is responsible for making a protein critical in the earliest stages of the human immune response, mounting a defense that creates difficulty for viruses trying to invade cells.

“By knocking out this gene in mice, and infecting them with various strains of flu, we were able to show that this gene’s absence increases the chances of heart abnormalities—decreased heart rate and irregular heartbeat—and death,” Yount said. “There’s been no known link between this gene and flu-related heart complications until now.”

Yount, an assistant professor of microbial infection and immunity at Ohio State, has long been interested in the IFITM3 gene and was curious about its role in severe flu—how, specifically, it might make people sicker and if it was related to heart problems, particularly in those with no previous cardiovascular disease.

“Flu can exacerbate underlying heart disease, but it can also affect the hearts of people who are otherwise healthy, typically in cases where people are so sick with the flu that they’ve been hospitalized,” said Yount, who is a member of Ohio State’s Comprehensive Cancer Center.

About 8 percent of U.S. residents are sickened with flu each year, and children and older adults are most vulnerable. Depending on the severity of the flu viruses circulating in a given season, anywhere from 12,000 to 79,000 people will die each year from flu complications, according to the Centers for Disease Control and Prevention.

Though scientists have been documenting the connection between flu deaths and heart complications since the 1918 influenza pandemic that killed at least 50 million people worldwide, the mechanics of why flu leads to heart trouble haven’t been clear.

“A lot of people have assumed that systemic inflammation from the infection stresses or harms the heart, but this new finding suggests that some people may be genetically predisposed to these complications,” Yount said.

Previous research has shown the mutations aren’t uncommon. About 20 percent of Chinese people and about 4 percent of people of European ancestry have IFITM3 mutations, he said.

Understanding the underlying causes of flu deaths could lead to therapies that might save at-risk people, Yount said. His lab is now working on testing experimental therapies in mice.

When Yount and his collaborators examined the heart tissue from the genetically-altered mice, they confirmed that the heart tissue was infected with flu virus. They also found a possible explanation for connections between the gene, the flu and the heart abnormalities: fibrosis. Fibrosis is the buildup of collagen in tissue. Collagen plays an important role in connecting muscle fibers, but too much can be a problem.

“Too much of this collagen can cause ‘bumps in the road’ that could disrupt the electrical flow of the heart—that could explain the erratic heart rhythms we saw in this experiment,” Yount said.

The study also found varying degrees of flu-related heart abnormalities depending on the virulence of the flu strain. The most harmful flu they tested led to highly erratic heart rhythms, lasting heart damage and greater chance of death. A moderate strain resulted in reversible, temporary heart abnormalities. When gene-deficient mice were given the weakest of three flu strains in the study, heart irregularities weren’t seen.