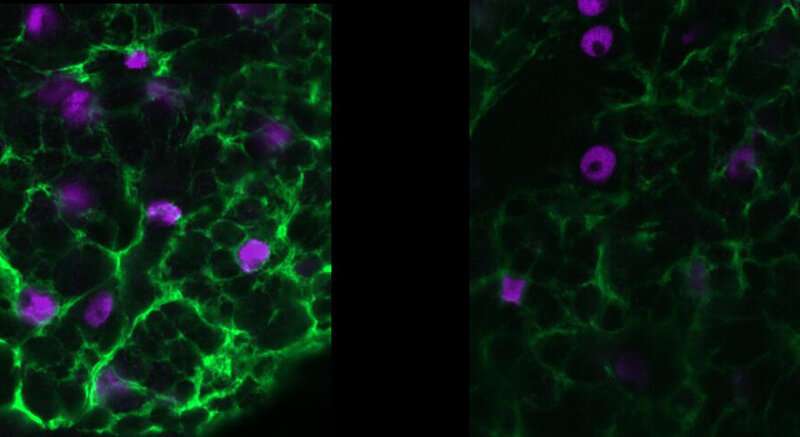 A new study provides potential new targets for treating epilepsy and new fundamental insights into the relationship between neurons and their glial “helper” cells. In eLife, scientists at MIT’s Picower Institute for Learning and Memory report finding a key sequence of molecular events in which the genetic mutation in a fruit fly model of epilepsy leaves neurons vulnerable to becoming hyper activated by stress, leading to seizures.

About 60 million people worldwide have epilepsy, a neurological condition characterized by seizures resulting from excessive neural activity. The “zydeco” model flies in the study experience seizures in a similar fashion. Since discovering zydeco, the lab of MIT neurobiologist Troy Littleton, Menicon Professor in Neuroscience, has been investigating why the flies’ zydeco mutation makes it a powerful model of epilepsy.

Heading into the study, the team led by postdoc Shirley Weiss knew that the zydeco mutation was specifically expressed by cortex glial cells and that the protein it makes helps to pump calcium ions out of the cells. But that didn’t explain much about why a glial cell’s difficulty maintaining a natural ebb and flow of calcium ions would lead adjacent neurons to become too active under seizure-inducing stresses such as fever-grade temperatures or the fly being jostled around.

The activity of neurons rises and falls based on the flow of ions—for a neuron to “fire,” for instance, it takes in sodium ions, and then to calm back down it releases potassium ions. But the ability of neurons to do that depends on there being a conducive balance of ions outside the cell. For instance, too much potassium outside makes it harder to get rid of potassium and calm down.

The need for an ion balance—and the way it is upset by the zydeco mutation—turned out to be the key to the new study. In a four-year series of experiments, Weiss, Littleton and their co-authors found that excess calcium in cortex glia cells causes them to hyper-activate a molecular pathway that leads them to withdraw many of the potassium channels that they typically deploy to remove potassium from around neurons. With too much potassium left around, neurons can’t calm down when they are excited, and seizures ensue.

“No one has really shown how calcium signaling in glia could directly communicate with this more classical role of glial cells in potassium buffering,” Littleton said. “So this is a really important discovery linking an observation that’s been found in glia for a long time—these calcium oscillations that no one really understood—to a real biological function in glial cells where it’s contributing to their ability to regulate ionic balance around neurons.”

Weiss’s work lays out a detailed sequence of events, implicating several specific molecular players and processes. That richly built knowledge meant that along the way, she and the team found multiple steps in which they could intervene to prevent seizures.

She started working the problem from the calcium end. With too much calcium afoot, she asked, what genes might be in a related pathway such that, if their expression was prevented, seizures would not occur? She interfered with expression in 847 potentially related genes and found that about 50 affected seizures. Among those, one stood out both for being closely linked to calcium regulation and also for being expressed in the key cortex glia cells of interest: calcineurin. Inhibiting calcineurin activity, for instance with the immunosuppressant medications cyclosprorine A or FK506, blocked seizures in zydeco mutant flies.

Weiss then looked at the genes affected by the calcineurin pathway and found several. One day at a conference where she was presenting a poster of her work, an onlooker mentioned that glial potassium channels could be involved. Sure enough, she found a particular one called “sandman” that, when knocked down, led to seizures in the flies. Further research showed that hyper activation of calcineurin in zydeco glia led to an increase in a cellular process called endocytosis in which the cell was bringing too much sandman back into the cell body. Without sandman staying on the cell membrane, the glia couldn’t effectively remove potassium from the outside.

When Weiss and her co-authors interfered to suppress endocytosis in zydeco flies, they also were able to reduce seizures because that allowed more sandman to persist where it could reduce potassium. Sandman, notably, is equivalent to a protein in mammals called TRESK.

“Pharmacologically targeting glial pathways might be a promising avenue for future drug development in the field,” the authors wrote in eLife.