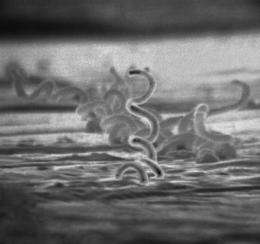 Much of the public health impact of syphilis revolves around its impact on fetuses and neonates through the mother-to-child transmission of the disease. Researchers reporting in PLOS Neglected Tropical Diseases have now analyzed temporal and demographic patterns in gestational syphilis (GS) and mother-to-child-transmission (MTCT) of syphilis.

Syphilis is a sexually transmitted infection caused by the Treponema pallidum bacteria. In Brazil, rates of GD and MTCT of syphilis have been on the rise, with 37,436 pregnant women and 20,474 newborns affected in 2016. Lack of diagnosis is suspected to play a role in stopping outbreaks.

In the new paper, Marcus Vinicius Pimenta Rodrigues of Universidade do Oeste Paulista—UNOESTE, Brazil, and colleagues used the National System of Aggravations and Notifications to calculate the incidence of GS and MTCT of syphilis from 2007 to 2013 in the Pontal do Paranapanema region of Brazil. They used the data to construct maps of the region— which includes 32 cities—showing how incidence rates vary between regions and over time.

Rates of MTCT for syphilis ranged from 0.37 to 2.30 per 1,000 live births between 2007 and 2013. The researchers found that there was no annual endemic period for syphilis, but that the month most susceptible to an endemic event of both GS and MTCT was February. In 2011, they there was an especially marked increase in GS cases, followed by an increase in MTCT the following year, suggesting that treatment of GS was not effective. In many cities, however, the number of MTCT cases was larger than the number of reported GS cases, suggesting a failure in the notification system.