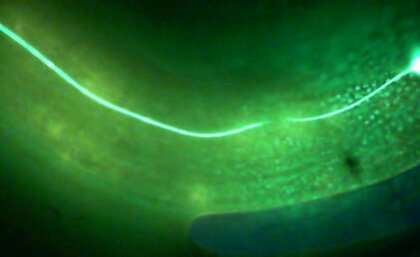 A tiny worm’s ability to repair damaged nerves could one day help people with nerve injuries such as paralysis, according to University of Queensland research.

Professor Hilliard said rejoining nerves could be a treatment for people with nervous system injuries, which often cause life-long disabilities.

“We knew that a molecule called EFF-1 kicked off this fusion process, but now have discovered that the protein RAB-5 controls the level of the molecule.

“When RAB-5 is lacking, there is more EFF-1 present and axons fuse better.”

Dr. Giordano-Santini said any application to humans was still a long way off, but manipulating the activity of RAB-5 in roundworms had provided a means to promote efficient neuron repair, a method that could be replicated in humans.

“EFF-1 isn’t present in humans but RAB-5 is, and we do produce several proteins that promote the fusion of membranes,” she said.

“Very little is known about how these proteins are regulated, but they may function in a similar way to EFF-1.

If this is the case, RAB-5 could play a role in their regulation, making it a target for controlling nerve repair in mammals.

“This could ultimately deliver a future where we have the ability to promote the fusion of damaged nerves in humans to restore their function.”