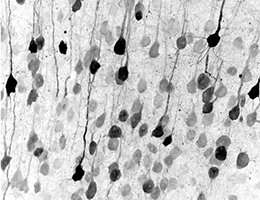 LMU researchers have developed a promising method for targeted generation of neurons from the brain’s own non-neuronal cells after loss.

Scientists from the Biomedical Center at LMU Munich and Helmholtz Zentrum München led by Prof. Magdalena Götz have made a crucial step towards fighting neuronal loss. They developed a methodology which allows turning local brain cells into new neurons after brain injury. This approach alleviates the need for transplantation and immunosuppression. This work has been published in Neuron.

Neurons that are lost in neurodegenerative disease or after brain injury can so far not be replaced. This often leads to permanent deficits. Even though cell transplantation has achieved promising improvement for Parkinson disease patients, it requires brain surgery and immunosuppression inhibiting the activity of the immune system and hence reducing the ability to fight infections and other diseases.

The pioneering work from the group of Magdalena Götz thus developed an approach using local brain cells to generate new neurons, the so-called “direct reprogramming.” The Götz lab has first tested this in the culture dish in 2002 and were very excited to find that young glial cells can be converted into neurons using factors that are active in development, when neurons are generated. They then moved on to adapt this approach in a mouse model of traumatic brain injury in 2005 and have recently reported to achieve an amazing efficiency in this conversion process after brain injury. Now they tackled the next key question—namely how many specific types of neurons can be generated—as brain function depends on zillions of different nerve cells.