Woman, 30, has her arm bone replaced with METAL and cement after breast cancer returned and ate away at her skeleton

A young woman had a bone in her arm removed and replaced with metal and cement to give her body a fighting chance against cancer.

Ex-hairdresser Laura Hughes, 30, from Norwich, found a lump in her breast when she was just 25-years-old in 2014. Diagnosed with stage three breast cancer, she required six rounds of chemotherapy and a mastectomy, plus hormonal treatment, radiotherapy and a year of Herceptin injections.

Upon completing treatment, Ms Hughes strived to increase awareness for breast cancer by trekking through Iceland, in aid of the charity CoppaFeel.

The trek was planned for August 2016, but – in the months leading up to – the cancer returned and ate into her bones. 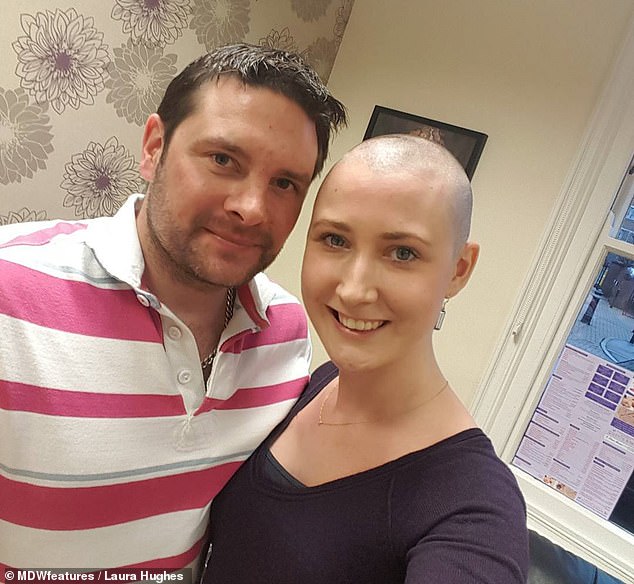 Together: Laura Hughes, 30, from Norwich (R) was diagnosed with breast cancer in 2014, but she’s been supported by her partner, Brad

She has since had the humerus bone replaced from the ball joint to half way down her arm. The bone marrow was also removed and cement replaced it to reduce any cells which were left in the bone. She now has a large scar most of the way down her arm.

Despite her difficult journey, Laura remains optimistic and has created a blog to share her experiences of living with terminal cancer – and completing the bucket list she created for herself. There are 50 goals on it, and so far she has ticked off 29 of them.

‘At the time it was a huge shock. I had no history of cancer in the family and I knew no one around my age who had gone through it. It all happened so fast, I didn’t really have time to think,’ she said of her initial diagnosis.

‘I was in chemo within a couple of weeks and having more scans and tests, it just stopped life in its tracks.

‘I went through six rounds of chemotherapy, a mastectomy, hormonal treatment and radiotherapy alongside a year of Herceptin injections. Having a mastectomy at just 26 was hard. It was the first operation I had so I was terrified.

‘But at the time I also just wanted the cancer out because whilst I could feel the lump, I knew my body was trying to kill me. I had always liked my boobs so learning to live with one for over a year was difficult. I lost confidence and changed the way I dressed quite a bit to cover myself up more.’ 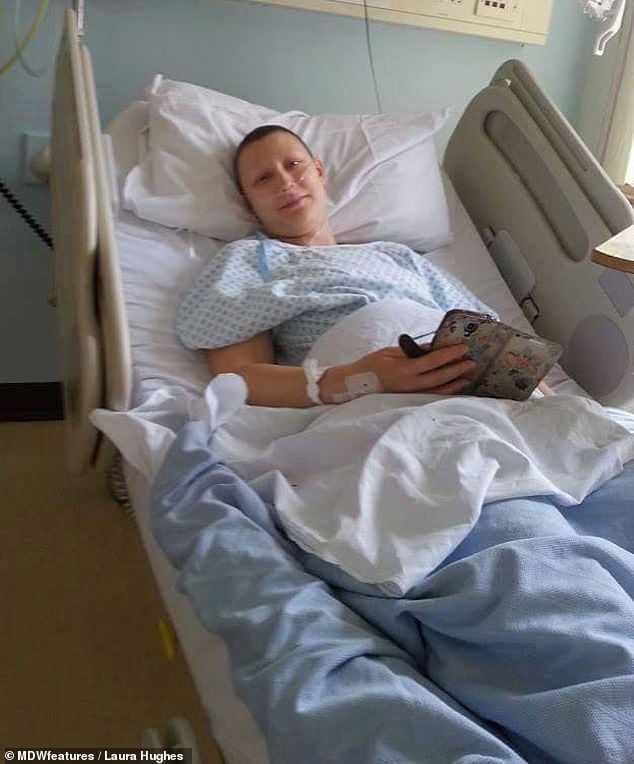 ‘I went through six rounds of chemotherapy, a mastectomy, hormonal treatment and radiotherapy alongside a year of Herceptin injections. Having a mastectomy at just 26 was hard. It was the first operation I had so I was terrified.’ 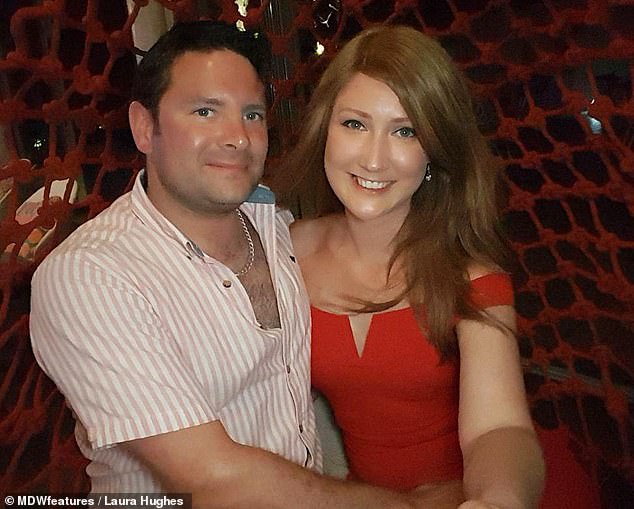 Good times amid the bad: Laura and Brad celebrating his birthday in October 2017

She added: ‘I went through six rounds of chemotherapy and 15 sessions of radiotherapy which both made me very unwell. Through the chemo I was sick, lost my hair, had achy joints, felt very tired all the time and could hardly leave the house.

‘After I finished my treatment, I threw a party to celebrate and then continued on with my breast reconstruction journey. To help raise awareness, I took up the challenge to trek in Iceland, raising money for charity CoppaFeel.

‘I began my training in early 2016 – I joined a gym and had personal training sessions. In the May, after some quite hardcore arm exercises, my right shoulder became painful, as though I had done a bit too much.

‘I rested arms for a week, but the pain carried on. I saw my doctor a few weeks later and convinced them I had injured myself in the gym and I needed physio.

‘Several weeks later I began seeing a physio and after three sessions he mentioned I should go back to my GP as he thought I may have done some serious damage to my shoulder, as by this point it was only getting worse and I could hardly move it.

‘When I went back to my GP, I mentioned my physio thought I may need a scan and so I was booked in for an ultrasound to check the tendons and ligaments. This scan showed no damage, which flagged alarm bells in the hospital due to my history, so I was referred for an emergency CT scan. 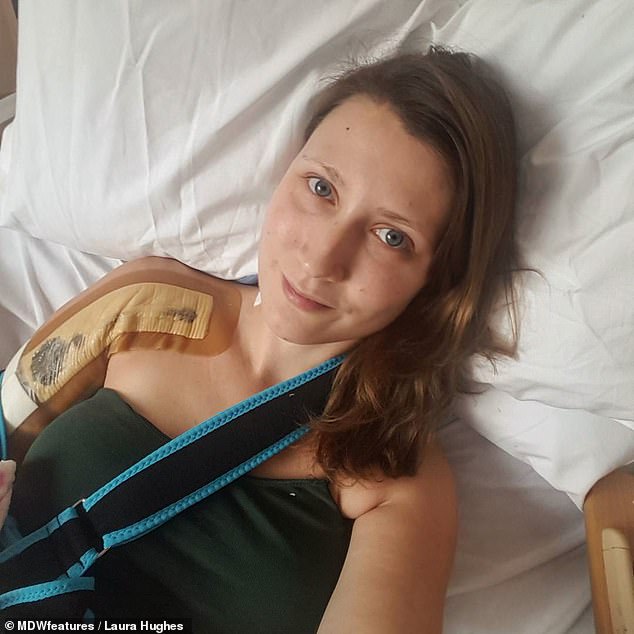 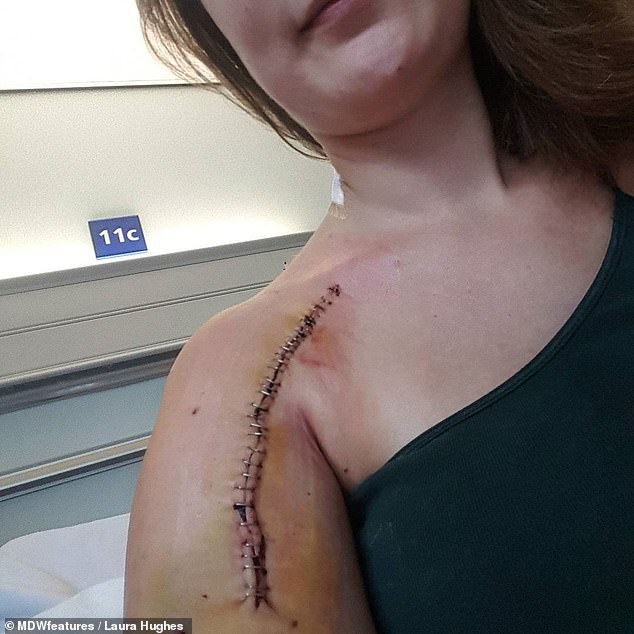 Scar tissue: The bone marrow was also removed and cement replaced it to reduce any cells which were left in the bone

‘Within hours of my scan, my GP called me informing me something suspicious had been seen and I needed to see my oncologist. Two days later, in October 14, 2016 I was given the news that my pain was caused by a tumour the size of the ball joint in my shoulder, which had also fractured some of the bone down my arm.

‘It was no surprise I was in so much pain, I went from taking paracetamol one day to being on morphine the next.

‘It wasn’t until several weeks later they knew the extent of the cancer and that it had spread from my original breast cancer. I now had stage four secondary cancer which is incurable. It was also discovered that the cancer had also spread to my spine and pelvis, but they hoped with more chemo this may shrink these areas.

‘Fortunately, although the cancer had spread to my bones, it had not yet entered any main organs, which I was grateful for. I underwent a huge operation on my arm and shoulder, taking out the infected bone and replacing it with metal in November 2016.

‘Unfortunately, due to my cancer being secondary, it will never be beaten. The treatment is now keeping me stable, but it is incurable, and I will never not have cancer. I just hope I get many more years to enjoy life as I’m not ready to leave this earth,’ said Ms Hughes. 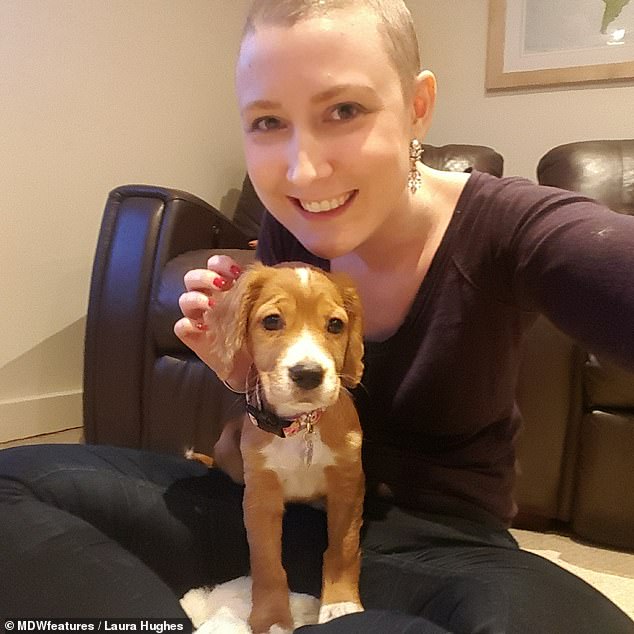 ‘Unfortunately, due to my cancer being secondary, it will never be beaten. The treatment is now keeping me stable, but it is incurable, and I will never not have cancer,’ says Ms Hughes 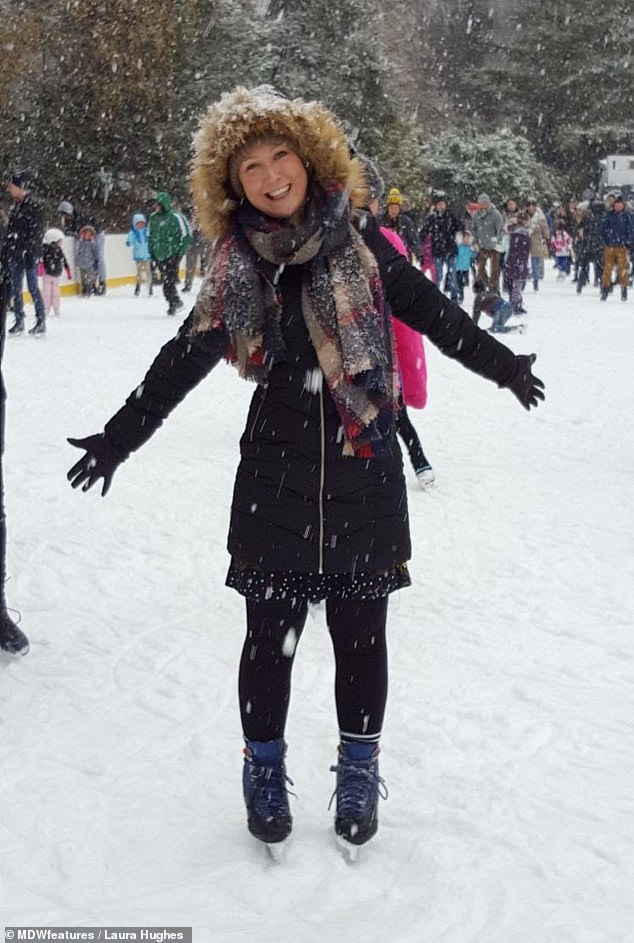 Fortunately, she has support in the form of her long-term partner, Brad.

‘My other half, Brad, has stuck by me through everything in the last five years, and he still wants to marry me which is so special to me. When I was re-diagnosed, I set up my blog Laura’s Life Is For Living List, which is a list of all the things I want to do in life.

‘I have walked an alpaca, got a puppy, seen an opera at the Royal Opera House, seen Strictly live, been to the Chelsea Flower Show, gone to the Maldives, ice skated in Central Park, swam with sharks and been to Twickenham to see the rugby.

‘I still have to ride on the Orient Express, go whale watching, husky sledging, go on a cruise, go on a game show, go to Monaco casino and most importantly, get married.

‘I have learnt not to worry about things you can’t do anything about and to live life to the fullest. We never know what day will be our last, so we need to enjoy life and smile more.

‘I want to spread awareness for breast cancer and what it’s like to live with secondary breast cancer. I want everyone who reads this to do something this year which they have been putting off.

‘People always think they can do it in the future but next year may never come. Stop putting off enjoying your life and live for today.’

WHAT IS BREAST CANCER, HOW MANY PEOPLE DOES IT STRIKE AND WHAT ARE THE SYMPTOMS?

What is breast cancer?

Breast cancer develops from a cancerous cell which develops in the lining of a duct or lobule in one of the breasts.

When the breast cancer has spread into surrounding breast tissue it is called an ‘invasive’ breast cancer. Some people are diagnosed with ‘carcinoma in situ’, where no cancer cells have grown beyond the duct or lobule.

Most cases develop in women over the age of 50 but younger women are sometimes affected. Breast cancer can develop in men though this is rare.

The cancerous cells are graded from stage one, which means a slow growth, up to stage four, which is the most aggressive.

A cancerous tumour starts from one abnormal cell. The exact reason why a cell becomes cancerous is unclear. It is thought that something damages or alters certain genes in the cell. This makes the cell abnormal and multiply ‘out of control’.

Although breast cancer can develop for no apparent reason, there are some risk factors that can increase the chance of developing breast cancer, such as genetics.

What are the symptoms of breast cancer?

The usual first symptom is a painless lump in the breast, although most breast lumps are not cancerous and are fluid filled cysts, which are benign.

The first place that breast cancer usually spreads to is the lymph nodes in the armpit. If this occurs you will develop a swelling or lump in an armpit.

How is breast cancer diagnosed?

If you are confirmed to have breast cancer, further tests may be needed to assess if it has spread. For example, blood tests, an ultrasound scan of the liver or a chest x-ray.

How is breast cancer treated?

Treatment options which may be considered include surgery, chemotherapy, radiotherapy and hormone treatment. Often a combination of two or more of these treatments are used.

How successful is treatment?

The outlook is best in those who are diagnosed when the cancer is still small, and has not spread. Surgical removal of a tumour in an early stage may then give a good chance of cure.

The routine mammography offered to women between the ages of 50 and 70 mean more breast cancers are being diagnosed and treated at an early stage.