When I sat down to watch Isn’t It Romantic on Netflix, I braced myself for pain. Perhaps not your usual response to a fluffy romantic comedy, but this one is a little bit different. You see, rather than the typical Hollywood-thin protagonist, Isn’t It Romantic is led by Rebel Wilson – a woman with a body just like mine. A fat body. The type of body so rarely seen in any movie, let alone in the lead role – least of all in a romance.

If plus-size characters appear in movies or television shows, they’re often either there to be laughed at or pitied. 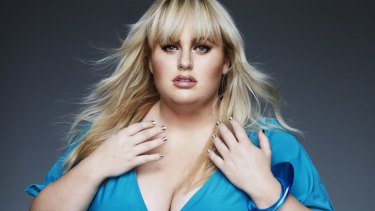 Rebel Wilson has played the bridesmaid, and the funny bestie, now she is a plus-sized romantic lead: Amen.Credit:Steven Chee

Fatness in seen in our society – and in the pop culture that reflects it – as a sign that something has gone wrong with that body. To be a fat woman in particular feels like the ultimate transgression. Every sideways look, every snide remark, every “well-meaning” suggestion about diet or exercise – they all add up to one message that rings through loud and clear: “how dare you take up so much space?!”

Fat characters (who are often not even played by fat actors, but instead relegated to the undignified fate of thin actors playing fat underneath layers of padding) usually reflect this message. Think of Fat Monica on Friends, Fat Schmidt on New Girl, Fat Terry on Brooklyn 99, even Rebel Wilson’s own Fat Amy in the Pitch Perfect series. Their fatness defines them ­– makes them clumsy, lazy, awkward, food-obsessed, weird, gross. They’re not whole people, they’re objects of derision and mockery.

To be a fat woman in particular feels like the ultimate transgression … They’re not whole people, they’re objects of derision and mockery.

Watching these portrayals in shows and movies that I would otherwise absolutely love, well, it hurts. Every fat jokes tears tiny chunks from me, piece by piece eroding the self-esteem I work so hard to build up.

There are, of course, exceptions to this, and a lot of brilliant plus-size characters that help build me up instead of breaking me down. There have even been plus-size rom-com leads in the past – Queen Latifah, Mo’Nique, Ricki Lake – as Rebel Wilson discovered when she inadvertently erased their work by proclaiming herself “the first-ever plus-sized girl to be the star of a romantic comedy”.

Still, the fact remains that these roles are few and far between, and more often than not the world of pop culture just isn’t for fat people, unless they want to be the butt of a joke.

So yes, it was with some trepidation that I turned on Isn’t It Romantic. And my heart sank when, within a few minutes, Rebel Wilson’s character Natalie is urged to stop a runaway food cart with her body because the “cart is valuable” – as though her body isn’t.

But then something remarkable happened. Natalie hits her head and wakes up to find her life has been transformed into a rom-com (it’s all very meta). She’s dressed like a rom-com lead in bright and beautiful outfits that flatter her body without hiding it.

Natalie attracts not one, but two guys who LOOK at her with love and lust, who take her on cute dates where she eats ice cream and shares meaningful moments and swoon-worthy kisses. And she does it all without once being mocked or sneered at because of the way she looks.

Without having seen the movie, the fact that all of this is triggered by Natalie bumping her head can certainly seem problematic. One of my concerns going into it was the idea that someone like Liam Hemsworth would only be attracted to Natalie in this alternate reality rom-com world, not real life.

But the way the story plays out is a lot more nuanced than that, and Natalie has agency throughout. She gets to be a full and complex character who grows and blossoms over the course of the movie. In fact, despite Isn’t It Romantic being a rom-com, the most important arc isn’t the romance at all – it’s Natalie’s relationship with herself.

It’s important to note that the emotional climax of Isn’t It Romantic centres around Natalie and her feelings. There’s one moment in which she declares, “I love… I love me.” And that’s the moment that made me cry, far more than any confession to a guy would have.

I got to see someone who looks just like me – someone who is told in lots of ways both explicit and implicit every day that they’re not deserving of love – stand up and proudly declare that not only does she deserve love, but she deserves to love herself.

Now that’s a message we all need to hear.