Emma Caulfield is ready to talk about her journey with Multiple Sclerosis (MS).

In a new interview with Vanity Fair, the WandaVision alum spoke candidly about her experience privately battling the potentially disabling neurological disease. Caulfield began experiencing nerve issues in 2010. A neurologist told her to get an MRI as a precaution; before she knew it, she was answering a call on set from her doctor, who confirmed her symptoms were from MS.

The disease runs in her family, so Caulfield immediately realized how serious the diagnosis was.

“I knew enough [from my father’s case] to be like, ‘Oh, my God,’” the 49-year-old actress told the magazine. “I’m trying to keep my shit together and I’ve got to go back to work. So that was my first experience of keeping everything really quiet and showing up and just doing my job.”

With MS, the immune system attacks the protective coverings around your nerves, causing serious issues to the brain and spinal cord. Some patients only experience mild symptoms, such as blurred vision or temporary weakness in their limbs; in more severe cases, others may lose the ability to walk.

In the decade since that life-changing diagnosis, Caulfield has kept her illness largely under wraps. She has worked consistently, taking treatments and keeping her stress levels as low as possible to prevent future flare-ups. For the most part, even her colleagues weren’t aware that she has MS.

“I’m okay right now,” she explained. “It’s a weird thing to say when you’re given a diagnosis like that, but truthfully, my attitude is not crumbling under the fear of ‘what if’ or ‘what can,’ or ‘what has’ for other people. I just have to keep going.”

Extreme weather is another factor that worsens her symptoms, she shared. It came up when she was filming WandaVision in scalding-hot Atlanta, Georgia: “[My body] works that much harder to cool me. It’s a major stress on the body. It’s dangerous for everybody to be in that kind of heat. It’s just harder on someone with MS.”

Ultimately, Caulfield decided to speak publicly about her diagnosis because she is “tired of not being honest.” 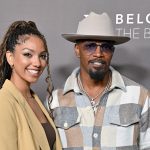 Jamie Foxx Applauds His Daughter Corinne's New Endometriosis Documentary: 'You Will Be Blown Away'

“My daughter has changed my perspective, as I think anybody who is a parent can attest,” the actress added. “I know that she has a 30 percent greater chance of coming down with this, just luck of the draw for her. … I’m not actually doing everything I can for her because I have my mouth shut. If I have a platform at all, I should be using it. Even if it affects my ability to get work…. It’s better for me to at least be vocal about this and be out there to try to help the MS Foundation and other groups who are doing research.”

She joins a small but vocal group of celebrities who have opened up about their MS journeys — including fellow actress (and Dancing With the Stars competitor) Selma Blair, whom Caulfield personally shouted out. “I think she’s inspiring,” she shared.

Before you go, check out these inspiring quotes about coping with grief: