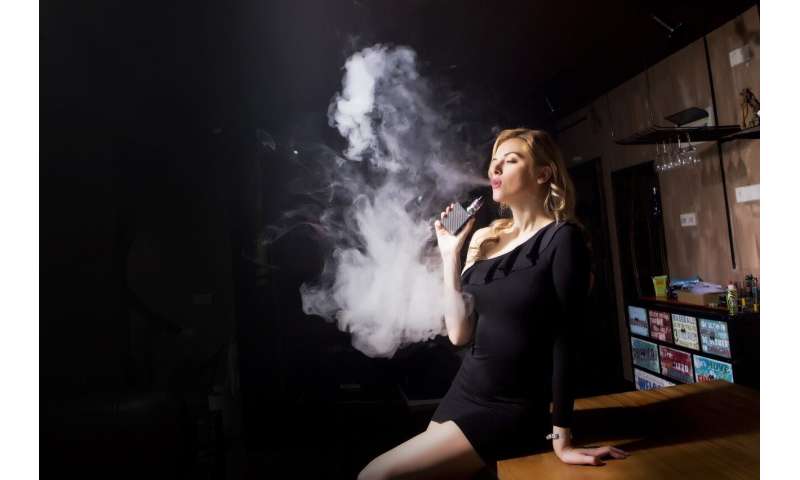 Mangala Narasimhan carefully inserted the long, thin probe down Gregory Rodriguez’s throat, snaking it past his vocal cords and deep into his damaged lungs.

A ventilator breathed for the 22-year-old college student as Narasimhan began sucking out the yellow, jelly-like clots that had nearly killed him.

Rodriguez’s case is an extreme example of the variety of lung illnesses that have sickened an estimated 1,479 people and killed at least 33 who vaped THC, nicotine or a combination. His lungs had failed so badly last month Narasimhan’s team had to oxygenate his blood for several days by pumping it out through his neck and into an artificial lung.

Rodriguez got sick after vaping an average of one “cart” a day of, among others, Dank Vapes brand marijuana extract he bought illegally online. That counterfeit brand is cited in many of the lung injuries studied, but there is no one device, brand or ingredient linked to all the cases.

“I guess I put too much trust in them. They just seemed so legit,” said Rodriguez, now recovering at home. “I never thought that someone would put poisons inside a vape cart, never thought they would put a person’s life at risk to save a few bucks.”

Government doctors and scientists are racing to uncover the cause of the outbreak, which initially was blamed on tainted vape oil containing cannabis or nicotine extracts. But researchers and regulators also are scrutinizing the myriad of vape devices themselves, many of which are manufactured in China without U.S. government or third-party safety checks.

Vapers, who often see the devices as safer and healthier than cigarettes, are potentially inhaling a toxic stew of atomized oils, an aircraft de-icing chemical, and toxic heavy metals leaching from the heating elements used to create the “smoke.”

“This appears to be an unforeseeable mixture of elements resulting from the combination of metal, heat, THC and liquid, causing very different lung injuries,” said Dr. Tony Casolaro, a former clinical chief of the pulmonary medicine branch at the National Institutes of Health, who is now a clinical professor at Georgetown University’s medical school.

While many vape pens are manufactured in sophisticated factories, others are cobbled together by online retailers, mom-and-pop shops or vaping enthusiasts. The devices, known as vape pens or e-cigarettes, have been around for more than a decade, and hundreds of different styles and types have flooded the market in recent years, with clunkier, refillable devices being replaced by smaller, harder-to-hack models with scant regulation of how they are made or what they might release when heated.

“If you’re buying cheap hardware from China, you never know what’s going on there,” said Arnaud Dumas de Rauly, a vaping expert helping develop international regulations. “In a certain sense, I’m happy we are having this vaping crisis. It points the finger at some things that should not be in these products.”

The federal Food and Drug Administration said it has more than 725 samples, including vaping devices and products that contain liquid, packaging and nearly empty containers to test and the Centers for Disease Control and Prevention is also developing standards for how to test what users inhale.

While most people who’ve been sickened were consuming marijuana-based products, a few said they consumed only nicotine-based vape juice. Vape pens can be used for THC or other cannabis-based oil or nicotine liquid. The “juice” comes either in a bottle that users can top up their tank with, or in pre-packaged cartridges, depending on the design.

Despite the name, the devices don’t actually vaporize the liquid, but rather turn it into an aerosol. Substances that might be perfectly safe to eat or rub on your skin become something entirely different when heated on a metal or ceramic coil, experts say. And the devices themselves may also be emitting toxic chemicals, particularly if they are held together with lead or cadmium solder.

The coils, she wrote, are typically composed of “complex metal alloys” but she noted other parts of the device may contribute metals. Additional sources could be the machines used to extract the THC from marijuana plants, or even the solder used to connect metal parts within the vape devices. In her report, Rule said the results suggest “several metals are being transferred from the device to the e-liquid in the tank as well as to the aerosol that is inhaled by the user.”

Columbia University associate professor of environmental health sciences Markus Hilpert said metal coils on tested refillable devices often lacked the shine they started with after a few weeks of use, suggesting they’d become oxidized. Metals can then become combined with the e-liquid after the devices are heated.

Hilpert’s group uses a method for the collection of aerosol directly from devices, which is needed to differentiate ingredients inhaled from the liquids.

In the majority of aerosol samples analyzed, the researchers found levels of carcinogenic metals in fumes above the minimal risk levels for safe air set by the Department of Health and Human Services. Those levels are not contained in regulations for the devices, and manufacturers trying to cut corners might be using lead or cadmium-based solder and other dangerous metals, experts consulted by U.S. TODAY said.

Frank Conrad, who owns the cannabis testing facility Colorado Green labs, suggested recently that cadmium has “the motive, means, and opportunity to cause the illness.” Heavy metal particles can be easily carried on a stream of vapor, he said and don’t need to hit the melting point of the metals.

Devin Alvarez, founder and CEO of Straight Hemp Products, said his products use ceramic heating coils and other premium components because they’re believed to be safer than metal coils can dissolve under high heat.

“Looking at the hardware is critical as it can be a source of harm for the user if not chosen properly,” said Alvarez.

He recommends regulation of the industry, including the hardware, perhaps through UL, a global safety certification company overseen by the Food and Drug Administration.

“Vaping is a nascent technology and the cannabis industry has the knowledge, but not the infrastructure to regulate itself,” said Alvarez. “That’s why we’re looking to partner with the federal government and anyone else regulating.”

Dumas de Rauly, CEO of vape company The Blinc Group, said testing labs looking for contaminants might not have the right equipment, including “puff” machines to replicate real-world use. He also noted testing by different labs has yielded wildly divergent results for identical products made by his company.

“When you change states, you have different molecules in play. When things are heated and transported as aerosols, they can become toxic,” said Dumas de Rauly, who also serves as chairman of the International Organization for Standardization standards committee on vaping products. The Swiss-based ISO is a non-profit group that establishes standards for everything from food safety to shipping containers and the strength of bolts used on railroads.

Dumas de Rauly said standardized testing would go a long way to helping regulators understand the causes behind the outbreak.

“Who knows what’s happening,” Hilpert, the Columbia University professor said. “It’s like a gigantic uncontrolled experiment where the people it’s tested on include millions of young people.”

Narasimhan, who has seen the lung illnesses firsthand, said there are no clear answers now. Millions of people vaped without incident for years, she noted.