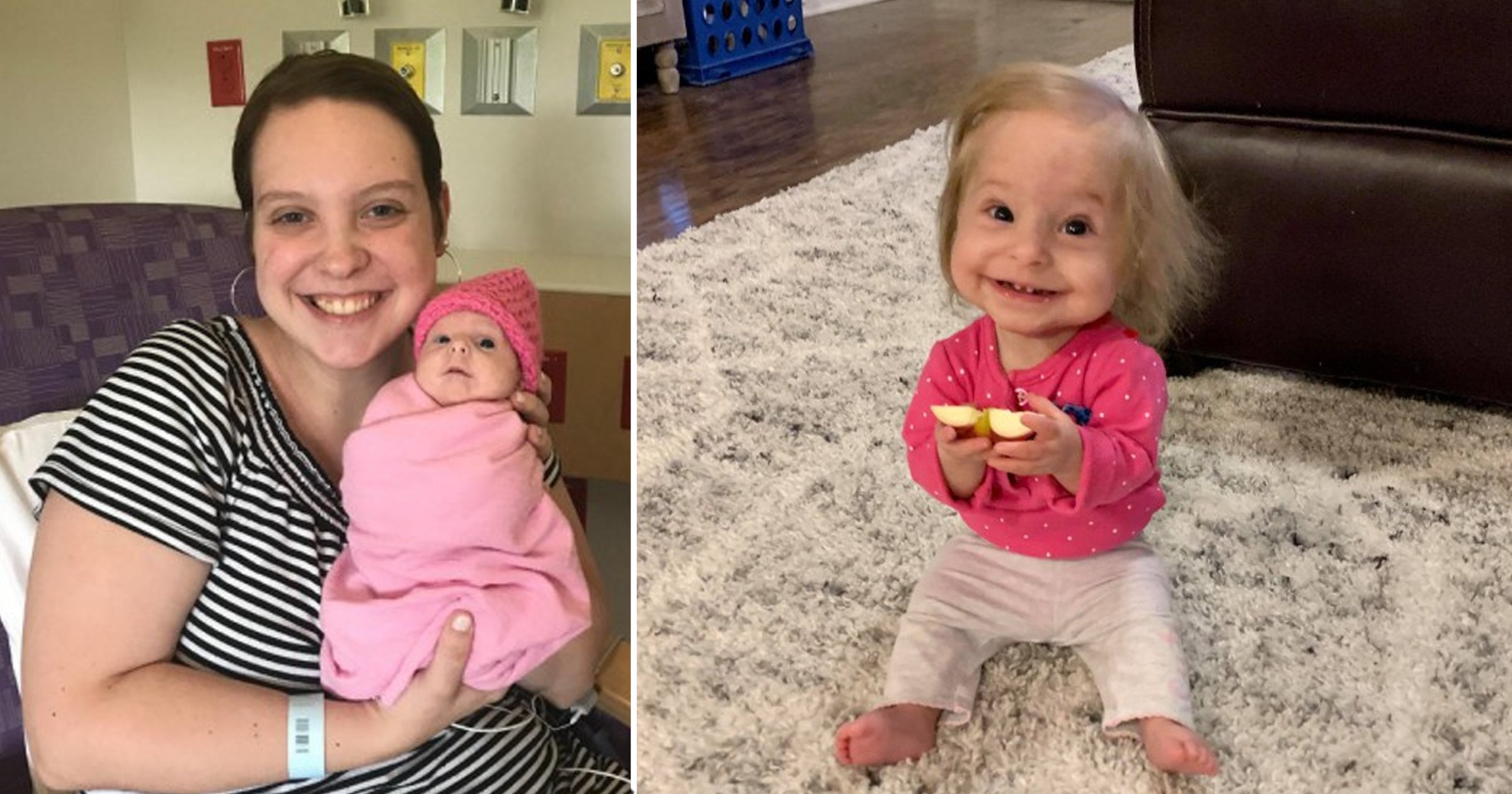 Abigail Lee is two years old but weighs just 7lb, wears clothes made to fit newborn babies and can sit in her doll’s furniture.

She has a rare form of dwarfism called Microcephalic Osteodysplastic Primordial Dwarfism Type II meaning that she’ll only grow to around 24 inches tall.

Mum Emily Lee, 25, from Louisiana, USA, found out her baby wasn’t growing at the normal rate while she was pregnant and when Abigail was born via c-section, she weighed just 2lbs 9oz.

The mum-of-two said: ‘Abigail grows two grams a day versus an ounce a day so she’ll still be seven pounds at her next birthday.

‘She only just fits into new born clothes so I don’t know what we’ll do when she gets old enough to tell me that she doesn’t want to wear onesies anymore.

‘My best friend has a two-year-old and seeing them next to each other is mind blowing.

‘Toys for kids her age are gigantic next to her. She has a table and chairs for her Barbies that she can sit in herself.

‘She eats like a normal kid but there are a lot of things that a two-year-old would be doing that she can’t and it’s her size holding her back.’

Although her parents knew Abigail was growing much slower than normal, she wasn’t officially diagnosed until she was eight weeks old.

Abigail had to stay in hospital during that time but eventually, she was able to go home with her mum, dad Bryan, 25, and older sister Samantha, four, who doesn’t have the condition.

Emily said: ‘When I was pregnant, she was always three weeks behind in her development.

‘I had a c-section at 36 weeks and she went straight into intensive care.

‘She was doing everything normally, she was breathing and eating fine but she was tiny.

‘When she was diagnosed, we’d never heard of this type of dwarfism so had absolutely no idea what it was was and for months I struggled to find anyone who had been through the same and could help.’

‘The day she was diagnosed, I just sat in my car in the hospital car park and cried for two hours because I didn’t know what I was doing.

Now two, Abigail has a few issues caused by her condition.

Emily said: ‘She is healthy but she has complications because she was born with dislocated hips and she can’t walk but she crawls and she’s going to therapy.

‘She’s also got really bad eyesight so we’re having trouble finding glasses that fit her.

‘It’s hard to balance out a child with special needs and a child without because Samantha knows her sister needs more help.

‘Samantha is an absolute rock star, she gets involved in all of the therapy and she’s really protective.’