Another flu shot fail? This season’s vaccine for the US, UK and Canada is likely to be a ‘mismatch’ for the deadly virus, expert warns

This year’s flu vaccine may not be effective, a top expert warns.

Dr Danuta Skowronski, an influenza expert from the University of British Columbia told Stat News that the this year’s flu shot for the Northern Hemisphere – including the US, UK and Canada – is likely to be a ‘mismatch.’

Flu shots have to be newly developed ahead of each season based on scientists’ predictions of which strains will be most active in the coming months.

Officials from the World Health Organization (WHO) choose the strains for the Northern Hemisphere’s shot in February, and chose those for the Southern Hemisphere last week.

For the Southern Hemisphere, officials chose influenza A/H3N2 and B/Victoria – different ones from the strains picked for the North, suggesting to Dr Skowronski that the prior prediction was wrong and the Northern shots may be ineffective. 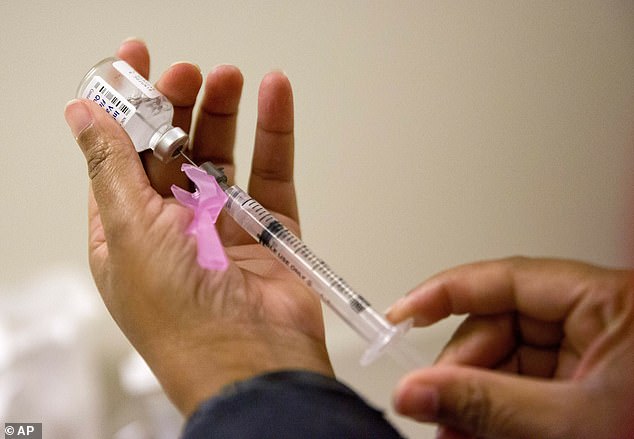 An influenza expert says that the World Health Organization may have been wrong about what strain of flu will be strongest in the Northern Hemisphere, suggesting the vaccine may be a ‘mismatch’ and leave people in the US, UK and Canada poorly protected (file)

Every year, the flu virus makes its way around the world, typically becoming more active in the US in October.

Without fail, between three and five million people fall ill globally and anywhere between 290,000 and 650,000 die of the disease.

Most of those that die are very young, very old or have an underlying condition.

But in the worst flu seasons, a healthy people succumb to the virus as well.

Already, one child has died of the flu in the US – an alarming bellwether that the US may be in for a particularly bad season.

The 2017-2018 flu season was one of those particularly nasty years for the flu.

It was the highest death toll since 1976, and pediatric deaths set an all-time record, aside from pandemics like the 1918 Spanish flu, which killed between 20 and 100 million worldwide.

The historically high fatality rate from the 2017-2018 flu season was largely blamed on the fact that the flu shots distributed to the US were a poor match for the circulating strains of the virus.

Flu vaccines are the best protection there is against the flu – but they are only effective against the strains of the virus upon which they’re based – and that’s a matter of calculated guesswork.

It’s impossible to quantify exactly how many strains of flu there are. The most common viruses are influenza A and B, but there are others, they vary based on the hosts they first attack (swine, bird etc) and mutate frequently.

Ahead of each season, health officials and flu experts the world over convene to carefully examine early cases of the flu in each season and the patterns from the previous years to predict which strains and variations will be dominant that year.

Flu vaccines are then developed based on either a dead form of those viruses or partial viruses.

When scientists’ predictions are close, the vaccines are highly effective, and fewer people die – so long as vaccination rates remain high. When they’re off-base, illnesses surge and death tolls climb.

These predictions are tricky, as the strains of the virus vary from continent-to-continent and the ways they move from one to the other vary annually.

But typically, the most potent and common ones are similar in the North and South.

Flu season starts earlier in the year in the Northern Hemisphere, so WHO officials convened in February to decide what strains should be the basis of the Northern shot.

After narrowing down the viruses to influenza B/Victoria and A/H3N2, the scientists struggled to make a choice about which particular variation of the H3N2 virus would pose the greatest threat in the 2019-2020 flu season, Stat reported.

So they went with the virus type that had suddenly ramped up at the end of last season in the US.

But Dr Skowronski thinks that that might have been a mistake.

‘That H3N2 wave was late and it was evolving at the time that they met in February,” Skowronski said of the strain selection committee. “And there was a diverse mix of H3 viruses. And it wasn’t clear to them, I guess, [which strain] … would emerge the clear winner,’ she told Stat.

But by the time the officials met again this month to decide the basis for the Southern Hemisphere’s shot, things had changed.

H3N2 has posed a shot-matching challenge in recent years. It was the same virus that the 2017-2018 shots offered such little protection – only about 40 percent – against that season’s dominant, and particularly aggressive strain.

But shorty of that, she urges that doctors be prepared that even people who get inoculated against the flu may wind up contracting it this year any way.

At least, however, the influenza B virus predicted in February appears to still be the correct one, which is particularly important as children tend to contract and die from B strains more often.

Last week, officials from the World Health Organization chose the strains of the virus upon which to base the Southern Hemisphere’s vaccine