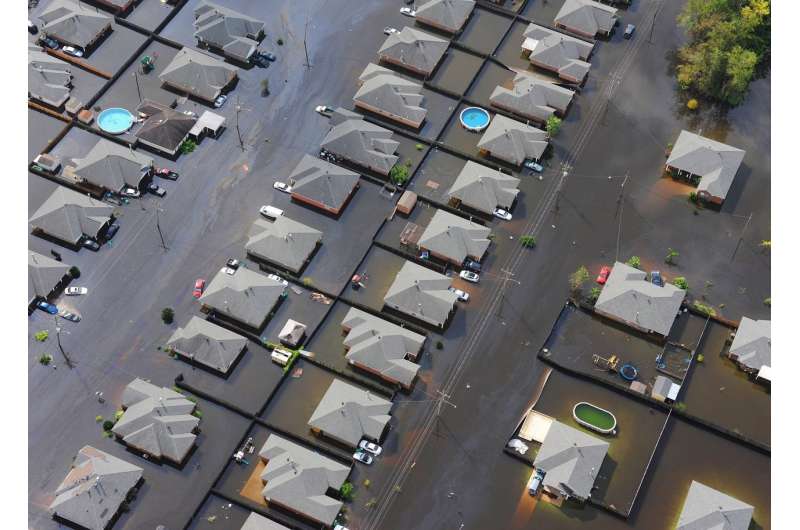 Researchers at Old Dominion University have sought for years to understand the many ways repeated flooding affects residents of Hampton Roads, Virginia.

They’ve homed in on how increased flooding impacts quality of life, traffic, the sinking of land and more.

Now a pair of ODU researchers has set out to focus on Portsmouth. And after interviewing households across the city, they say one of the most concerning patterns to emerge is a likely connection between chronic flooding and childhood asthma.

“We were really shocked at the prevalence of asthma in Portsmouth, in certain populations, in certain geographies,” said Joshua Behr, a research associate professor with ODU’s Virginia Modeling, Analysis and Simulation Center.

The trend is particularly bad among renters and those in low-income neighborhoods.

Virginia’s asthma rates are already above the national average but they’re even higher in Hampton Roads, and more so in Portsmouth, Behr said.

“Then you get down to particular (Portsmouth) neighborhoods and look at pediatric asthma and it’s just off the charts—five- or sixfold what it should be.”

The findings are a piece of a broader project by Behr and Rafael Diaz, also a research associate professor with the simulation center. Some of it is commissioned by government agencies, including the city of Portsmouth and National Oceanic and Atmospheric Administration.

For the asthma data, Behr said he and Diaz interviewed about 5% of all households in Portsmouth.

About a quarter of them said at least one person in the household had asthma. Of those, over a third were children.

Nearly a third of households with asthma also reported they’d been unable to get in or out of their neighborhoods because of flooding within the past year.

In a preliminary presentation of the data, Behr and Diaz break down a host of other factors.

Households that reported suffering damage to their property due to flooding, for instance, were more likely to report asthma.

All of this simply shows correlation, though, not direct causation, Behr acknowledged.

Connecting the dots between asthma levels and recurrent flooding is an ongoing process.

Mold and mildew were present inside the homes of about a third of the Portsmouth households with asthma.

What the ODU team hopes to do is build a compelling argument that increased flooding can worsen asthma in a region prone to such rising waters.

Mold and mildew is one reason. Worsening seasonal allergies and weather connected to climate changes could be others. Behr said he hopes to do more research into exactly how triggers linked to recurrent flooding could be behind bad asthma.

Lax code enforcement and absentee landlords seem to compound the issue in Hampton Roads, he added.

Areas most prone to flooding become cheaper to live in, thus drawing in those with low incomes. They then might lose property to flooding even as they’re least equipped to pay for it, becoming a “vicious cycle,” Behr said.

Asthma is not just an inconvenience, either. The Portsmouth surveys show that in households with asthma, nearly half visited the emergency room for it at least once within the past year, with 14% going to the ER at least twice.

There are major economic implications as well, Diaz said. In a household with a single parent, for instance, flooding and asthma-induced visits to the emergency room can mean being late to work and school.

In a federal employer-heavy region like Hampton Roads, that could be an eventual drain on the workforce as well as national security, Diaz said. Not to mention costs to the health care system.