ME & MY OPERATION: The ‘Smart’ pump that could mean end of type 1 diabetes jabs

Being diagnosed aged 11 with type 1 diabetes was the start of a worrying time — I had to learn how to do fingerprick tests, to check my blood sugar levels, several times a day and inject myself with the right amount of insulin.

I’m very sporty, and my blood sugar levels would often dip too low after exercise, making me feel tired and dizzy — so, when I was 14, I went on to an insulin pump to try to take greater control.

It constantly gives you tiny doses of background (‘basal’) insulin and, at the push of a button, releases larger doses (‘bolus’ insulin) to process food. 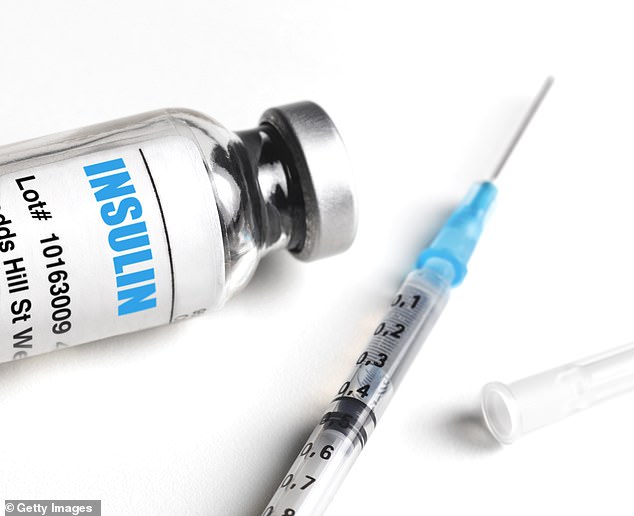 Fact: 450,000 people in the UK have type 1 diabetes, where the body stops producing any, or enough, insulin. Patients manage their condition with fingerprick tests four to ten times a day, to check blood sugar levels, then injecting themselves with the insulin they need

To work out how much bolus insulin you need, you check your blood sugar with a fingerprick test, then press a button on the matchbox-sized device clipped to your waistband. This delivers insulin via a thin tube inserted into the abdomen.

Connecting the tube is easy — you hold a special insertion device against the skin and press a button, which pushes a needle just under the skin. A long tube then connects the needle to the pump.

Having the pump helped to ensure my blood sugar was more stable, but I still had to do a lot of fingerprick tests, as my levels were unpredictable.

When I was younger, party food often resulted in me getting up in the night because I over or underestimated the amount of carbohydrates in it.

Drinking alcohol as I got older was a gamble, too, because I was never sure how it would affect my sugar levels.

I knew I was more prone to a range of health problems, such as eye damage, if I didn’t keep my blood sugar well controlled.

So, from my late teens, I also used a continuous glucose monitoring (CGM) device. This is a patch, the size of a £2 coin, worn on the skin. It has a tiny needle that measures glucose levels 24/7 and a sensor sends the readings to a screen on the insulin pump. It traces a graph on the pump so you can spot trends to help work out how much insulin you need.

This significantly reduced the amount of fingerprick tests I needed. However, as it measures glucose in the skin, rather than the blood, results can become less accurate over time, so I still had to calibrate the device by checking my blood glucose levels with a fingerprick test two to four times a day. 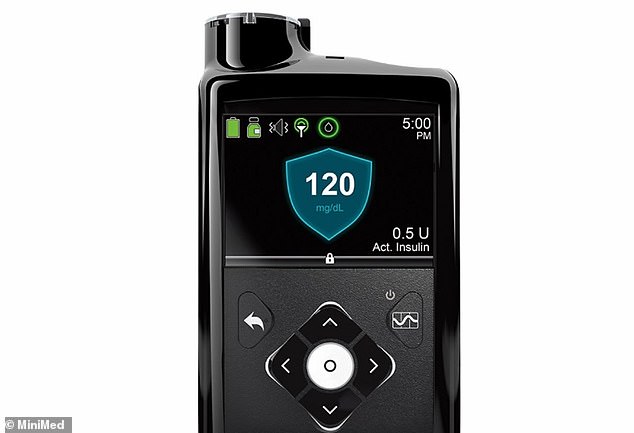 Breakthough: The MiniMed 670G, launched in the NHS earlier this year, is a significant step in this direction — it combines a continuous glucose monitor with a pump, which delivers the right amount of basal insulin 24 hours a day 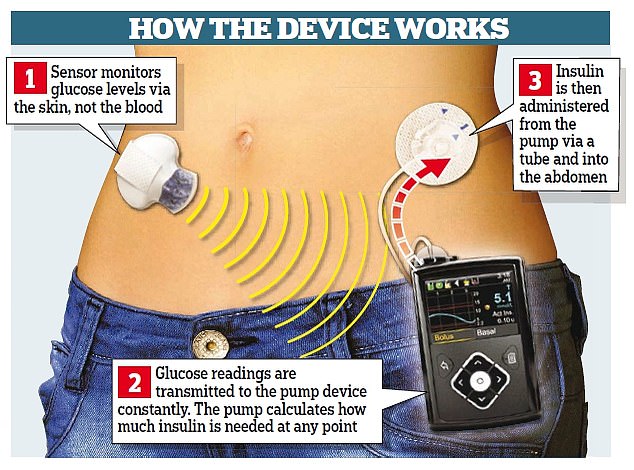 Progress: Getting to grips with the technology may be difficult, however. A U.S. study of 83 new users, presented at the Endocrine Society’s conference this year, revealed nearly a fifth stopped using it as it is not user-friendly

Then, last October, my consultant asked if I wanted to upgrade to the MiniMed 670G.

This pump is connected to the infusion site already in my abdomen via a tube and a sensor — called the Guardian Sensor 3 — under the skin.

Glucose readings from the sensor are sent wirelessly to the insulin pump, which administers background insulin 24 hours a day and adjusts this depending on sugar levels.

I don’t have to keep checking as often as I used to. I still need to administer bolus doses through the pump manually, as it can take up to 20 minutes for insulin to start working and the device can’t predict when, and what, I’ll eat.

But, if I don’t get the calculation quite right, the machine adjusts the dose — it takes away a lot of the worry.

Around 450,000 people in the UK have type 1 diabetes, where the body stops producing any, or enough, insulin. Traditionally, patients manage their condition with fingerprick tests four to ten times a day, to check blood sugar levels, then injecting themselves with the insulin they need.

The long-term goal is to develop an artificial pancreas to monitor blood sugar levels and then give the patient the right amount of insulin.

WHAT ARE THE FIVE NEW TYPES OF DIABETES?

For decades the disease has been considered to be two different forms – type one, an autoimmune disease in which people stop producing insulin, and type two, in which the body becomes resistant to insulin.

But now a major project in Sweden and Finland has found type two diabetes should actually be categorised as four different diseases.

The researchers, led by experts at Lund University, said the findings should prompt a ‘paradigm shift’ in the way people treat diabetes.

Cluster 1. Severe Autoimmune Diabetes – which until now has been known as ‘type one’ diabetes – is an autoimmune disease in which people stop producing insulin. Usually strikes in childhood but can emerge in adults. Requires insulin injections for life.

Cluster 5. Mild Age-Related Diabetes is the largest group, with 40 per cent of all patients, and consists mostly of elderly patients.

The MiniMed 670G, launched in the NHS earlier this year, is a significant step in this direction — it combines a continuous glucose monitor with a pump, which delivers the right amount of basal insulin 24 hours a day. Unlike other pumps that give a set dose of insulin day and night, the new device finds patterns in blood sugar levels and makes predictions about how it may change — making micro adjustments to insulin delivery every five minutes, mimicking the function of a healthy pancreas.

How much insulin your body needs can vary by up to 200 per cent from one day to the next — what you eat, exercise and stress all affect your blood sugar.

By stabilising it, the amount of time patients spend in a healthy glucose range is maximised, preventing immediate problems such as low glucose, and long-term ones like heart disease.

Most people with type 1 are ‘in range’ around 40 per cent of the time. Data presented at a recent conference showed that, in around 150,000 users in the U.S., the mean time spent in this healthy glucose range was more than 70 per cent.

Getting to grips with the technology may be difficult, however. A U.S. study of 83 new users, presented at the Endocrine Society’s conference this year, revealed nearly a fifth stopped using it as it is not user-friendly.

Around 200 NHS patients now have this technology — it couldn’t be offered to everyone, as it costs around £5,000 a year and cheaper approaches do work, too.

Around 10 to 15 per cent will get good glucose control with injections, 30 to 40 per cent with a pump, and another 30 per cent using a CGM.

For those who still can’t get good glucose control, the MiniMed 670G, which has to be renewed every four years, may be appropriate.