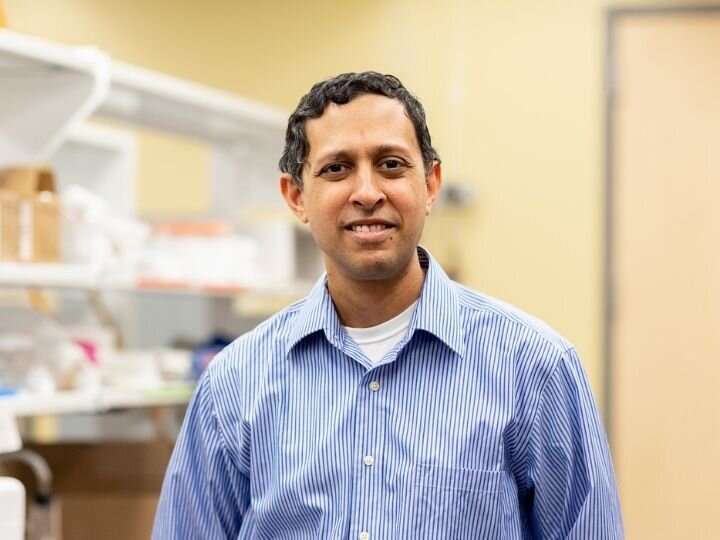 In the war against cancer, one of the most critical battles is waged on a cellular level as T cells from the immune system are altered in the lab to attack cancer cells. This form of immunotherapy, called chimeric antigen receptor (CAR) T-cell therapy, can be a life-saving treatment resulting in tumor control lasting ten years or longer.

Now an engineer at the University of Houston has found a way to determine which patients are likely to respond to CAR T-cell therapy, saving precious time in treating lymphoma, which is most responsive to this form of immunotherapy. It’s valuable knowledge to have since not all patients respond to the therapy, and some experience severe side effects.

To determine the best patient prospects, Navin Varadarajan, M.D. Anderson Professor of chemical and biomolecular engineering, studied the dynamic interactions between T cells and tumor cells. His findings, reported in the Journal of Clinical Investigation, point to the relationship between a ligand molecule on a cancer cell (CD58) and a protein on a T cell (CD2) which work together to communicate and activate the CD2, turning it into a cancer cell killer.

“The ligand for CD2, CD58 is expressed at higher levels in the tumors of lymphoma patients who respond better to CAR T-cell treatment. We identified that CD2 on T cells is associated with directional migration and that the interaction between CD2 on T cells and CD58 on lymphoma cells accelerates killing and serial killing,” reports Varadarajan.

By interrogating thousands of individual interactions between T cells and tumor cells, the research team identified the important interaction between CD2 and CD58. To translate the results back to the clinic, Varadarajan and Dr. Sattva Neelapu from MD Anderson, stained the tumors obtained before initiation of treatment. That’s how the group was able to show that patients whose tumors expressed CD58 are much more likely to respond to CAR T cell therapy compared to patients whose tumors did not express CD58.

Growing and incubating at Technology Bridge

The University of Houston has obtained a patent on the TIMING process and Varadarajan co-founded the company, CellChorus, to commercialize it. CellChorus is housed at the UH Technology Bridge, which provides space to startup and spin out companies from UH and nurtures their growth.

“We are so lucky to have the Technology Bridge as our incubator space in Houston, near the greatest medical center in the country, with unique access to the centers of medicine difficult to replicate in most other places in the country,” said Varadarajan.