Swapping just half an hour of sitting for any type of physical activity could cut your risk of early death more than one-third, a new study claims.

Even short bursts of activity performed for just a minute or two were found to extend lifespan.

The team, from Columbia University Irving Medical Center in New York, says its findings prove the ‘no pain, no gain’ mantra when it comes to exercise is ‘not true’ and that any amount of time spent moving leads to better health. 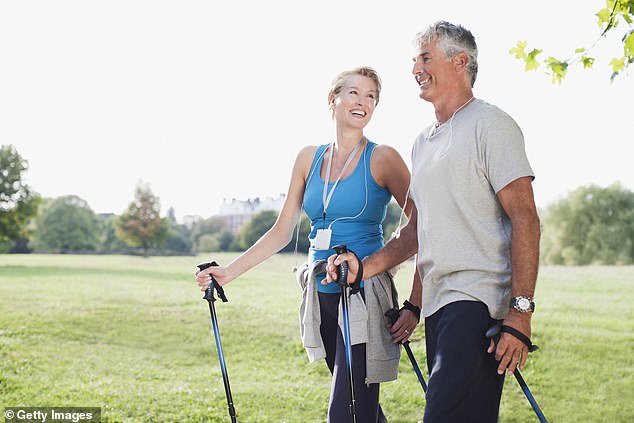 Lead author Dr Keith Diaz, an assistant professor of behavioral medicine at Columbia University Vagelos College of Physicians and Surgeons, told DailyMail.com that the study builds up on previous research from 2017.

‘Basically we found everyone should be taking a break every 30 minutes from their sitting,’ he said.

‘But then people would wonder: “What should I be doing if I’m taking a break? Can I just walk down the hall? Do I need to sprint for 20 minutes?”‘

For the new study, published in the American Journal of Epidemiology, the team looked at nearly 8,000 participants aged 45 or older between 2009 and 2013.

The participants wore an activity monitor for a minimum of four days which tracked both the amount and intensity of their physical activity.

The researchers calculated the death rate through 2017 and estimated how much substituting sitting time with exercise substituting would affect mortality rates.

They found replacing 30 minutes of sitting with low-intensity physical activity for the same amount of time could reduce the risk of early death by 17 percent.

And replacing sitting with 30 minutes of moderate- or high-intensity activity could slash the risk by 35 percent.

They even found that just a minute or two could still decrease your risk of early death.

‘We were surprised that bouts of less than 10 minutes has equal benefits,’ said Dr Diaz.

‘We’re shifting the narrative that physical activity had to be done in long periods. The old “no pain, no gain” mantra is not true.

‘You can’t just do one bout for one minute. But if you do one minute bouts 10 times – taking a break, going to the water cooler, go to a coworker’s desk – and do it over the course of a day, it negates the effects of sitting.’

For future research Dr Diaz says his team plans to look at the risk of cardiovascular-related death from sitting.

‘I want people to walk away knowing it’s not that complicated or that hard. Sit less, move more, more frequently,’ he said.

The previous guidelines from US Department of Health and Human Services said adults should be aiming for at least 10 minutes of aerobic activity a day.