How far would you go to beat the battle of the bulge? Gym at 6am? Give up bread, potatoes and pasta? Banish the biscuit barrel and chuck away the chocolate?

Many of us have been there, done that. But the secret to staying in shape lies in doing less rather than more, or so thinks Matthew Walker, professor of neuroscience and psychology at the University of California, Berkeley, and founder and director of the Center for Human Sleep Science. 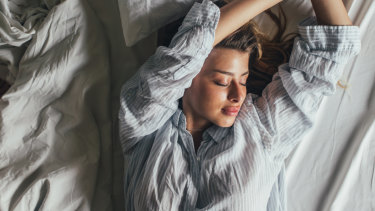 Don’t even think about dieting while tired. If you do, scientists havefound that most of the weight you lose will come from the body’s stores of lean muscle rather than fat.Credit:Stocksy

He says that bad sleeping patterns or lack of sleep can lead to everything from serious heart problems to mental health issues. He even found that those who sleep well look younger and make more money. What's more, a recent study published in Scientific Reports demonstrated a marked link between weight gain and insomnia.

This is bad news for the likes of Kim Kardashian (a self-confessed insomniac), Donald Trump (who's often up tweeting at 4am) and Nigella Lawson, who has revealed she goes to bed at 7.30pm and then sleeps in two-hour bursts "and not many of them". Walker's findings – which stem from his own research (he has published more than 100 studies), and those of other scientists – make worrying reading in the sleep department.

Because, simply put, a lack of sleep is making us fat. Not only does tiredness sap our get-up-and-go, it alters our bodies on a chemical level. "One week of short sleep – five or six hours per night – will change your blood sugar levels so significantly that your doctor would classify you as pre-diabetic," says Walker.

Being pre-diabetic means we develop an inability to adequately regulate our body's blood sugar. When this happens, it can cause fat to accumulate around our stomach, hips and bottom – and, as the body finds it easier to store fat than burn it, this extra weight is hard to lose.

Being well-rested also means we make healthier food choices, Walker says. "These food choices may put you on a path towards weight control, rather than weight gain."

And don't even think about dieting while tired. If you do, scientists have found that most of the weight you lose will come from the body's stores of lean muscle rather than fat. "I'm not going to say that the obesity crisis is caused by the sleep-loss epidemic alone," Walker continues. "It's not. But processed food and sedentary lifestyles do not adequately explain its rise. Something is missing. It's now clear that sleep is that third ingredient."

Nathalie Schyllert, CEO of Bodyism, an exclusive London gym that counts David Beckham, Rita Ora and Lara Stone among its clients, agrees. She says the Bodyism approach centres around "whole-body wellness", of which sleep is a key part.

"Sleep is one of our four pillars of health and arguably the most important, as it has so much influence on the others – movement, mindset and nutrition," she says. "The lack of a solid sleeping routine, or going to bed too late, leads individuals to sacrifice good habits. In the morning, they're tired, they hit the snooze button for those extra few minutes in bed and often sacrifice a healthy home-made breakfast for a strong coffee and sugary croissant on the way to work."

As she explains, choosing sugary or low-nutrient foods for breakfast often leads to a lack of productivity, increased irritability, sugar cravings and little interest in working out. Being tired also increases your risk of injury when you do exercise. Schyllert says the clients who get the best results in the gym are the ones who sleep well.

"They build solid sleep routines and have consistent times to go to bed and wake up," she says. "Our bodies love routine and this means we wake up with more energy and motivation to hit the gym or make a nutrient-dense breakfast to set us up for the day."

So how much sleep is enough? While Walker says it's not possible to give everyone a prescribed amount of shut-eye per night – "eight hours isn't suitable for everyone, some need more, some need less" – he does say the vast majority of us fall somewhere on a spectrum of needing between seven and nine hours of sleep per night. But one thing's for sure: we are getting less than our grandparents did.

"A 1942 Gallup poll in America found that the average person got 7.8 hours of sleep per night," says Walker. "Over the last 70 years, there has been quite a considerable decrease in sleep time. In the US, the average is six hours and 31 minutes and in Japan, six hours, 22 minutes."

A 2013 study showed the average adult in the UK is getting six hours and 35 minutes of sleep a night from Monday to Friday. In Australia, adults average seven hours a night, according to the Sleep Health Foundation.

So is a lie-in more likely to help us shed the excess kilos than an early-morning workout session?

Yes – and no. While dragging yourself to the gym every day is counterproductive, experts such as Walker advocate going to bed and getting up at the same time each morning, and prioritising sleep over scrolling through Instagram before bed. That way, you'll have had enough rest by the time your alarm goes off and can exercise well rested.

"People often ask me how much sleep I get and I don't mean to sound trite, but I practise what I preach," says Walker. "For all manner of reasons. I make sure I have a good sleep routine because when you know the evidence as I do, you just wouldn't choose to do anything else."

Drink banana tea We've heard of camomile tea, night-time tea and other soporific blends, but banana tea is a lesser-known but tasty sleep-inducing drink. It's made by adding banana and its skin to boiling water with a touch of honey – a variety of recipes can be found online – and works due to its high magnesium and potassium content.

Spend less time staring at a screen Blue light from devices disrupts the brain's melatonin, which controls how sleepy we feel. Those with Apple devices running iOS 12 have a Screen Time function, allowing users to monitor how long they spend on specific apps and set limits for switching off.

Buy new pillows We've all heard that we should change our mattresses regularly, but did you know you should change your pillows every three years? "The firmness or softness of a pillow is not only determined by the percentage of down, but the quality and quantity," says Robert Lancaster Gaye, the founder of Tielle Love Luxury, which makes bedding for top hotels throughout the world. "We always recommend you buy one pillow, sleep on it, and then buy more once you're happy with it."

Try working out earlier Exercising less than four hours prior to going to bed not only raises your body temperature, and can cause dehydration, it also produces the stress hormones cortisol and norepinephrine, which keep you alert.

Open a window Your body heat peaks in the evening and then drops to its lowest levels when you're asleep. A cool 16-18 degrees Celsius is ideal for a bedroom. Hotter rooms cause restlessness and colder means it will be harder to get to sleep in the first place.

This article appears in Sunday Life magazine within the Sun-Herald and the Sunday Age on sale July 28.