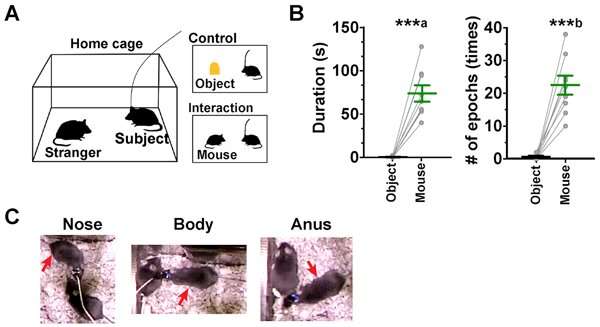 A research team led by Professor Takumi Toru of Kobe University’s Graduate School of Medicine (also a Senior Visiting Scientist at RIKEN Center for Biosystems Dynamics Research) have identified ‘social cells’ in the brain that are related to social behavior. The cells were identified via Ca imaging conducted using a microendoscope. It is expected that further research will illuminate the neural network for decision-making in social behavior.

These research findings were published in the American scientific journal PLOS Biology on September 21.

Social distancing is one of the methods that is being endorsed to prevent widespread novel coronavirus infection. It has been said that a physical distance of 2 meters is necessary to prevent virus transmission. How are distances between people, socially distanced exchanges and societal interactions determined?

This kind of social behavior is a complex behavioral pattern consisting of ‘sensory inputs’, ‘internal states’ and ‘decision making’ that span the stages from ‘sensory processing’ to ‘behavior modification’. The behavioral pattern sequence begins with individuals using multimodal sensory cues (such as sight, smell, hearing and touch) to process information about another individual. This information is then referenced against (social) internal states (such as motive, arousal, emotion, interoception and memory) and behavior is decided upon (for example, investigative, mating, aggressive, nurturing or dominating behaviors). 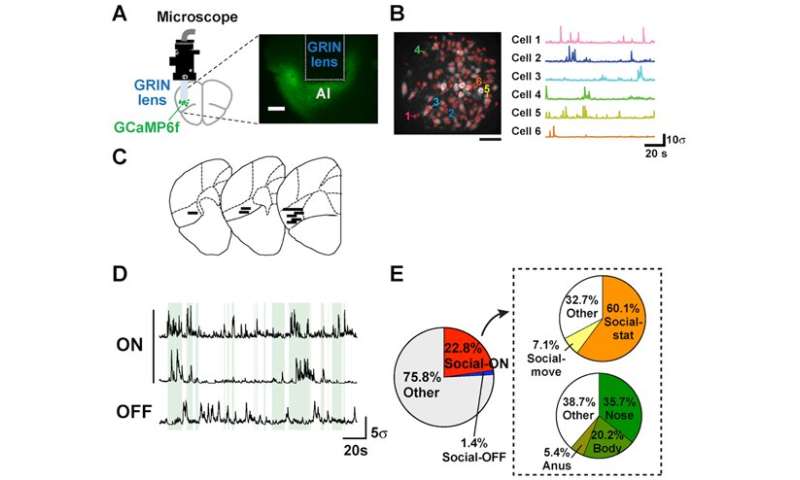 It is understood that regions of the brain such as the amygdala, pituitary, mesencephalon and the prefrontal cortex are involved in social behavior. However, the detailed neural networks of these regions are not yet well understood, particularly at a cellular level.

Methods to map neural activity across the entire brain have been developed. These include functional MRI and mapping the expression of immediate-early genes, such as c-fos. In addition, specific neural network regions in freely moving mice have been monitored by methods including fiber photometry and Ca imaging conducted using a miniaturized fluorescence microscope affixed to the rodent’s head (as in this study), in addition to observations conducted with a two-photon microscope on mice with their heads fixed in place.

The research team injected Ca indicator (GCaMP) into the insular cortex of mice using an adeno-associated virus vector. Next a GRIN lens was inserted into the agranular insular cortex (AI). This enabled the research team to use Ca imaging conducted via the miniaturized fluorescence microscope fixed to each mouse’s head to record the neural activity of freely moving mice.

Moreover, the researchers were able to identify Social-ON cells (that responded to the presence of the stranger mouse) and Social-OFF cells (active during periods of no social interaction) through analysis of the neurons inside the AI. These cells reacted to the stranger mouse, regardless of whether it was placed in Sections A or B.

The insular cortex is anatomically situated to integrate multimodal sensory social cues into the ‘Social decision-making network’, which consists of the ‘social behavior network’ and the mesolimbic reward system. This research succeeded in directly observing AI activity during social interaction at a single cell level, providing new insight into the cellular basis of the insular cortex’s social functions. In other words, the researchers identified a large number of Social-ON cells and a smaller number of Social-OFF cells that demonstrated opposing activity during social interactions. Further research to identify and manipulate the activity of Social-ON and Social-OFF cells’ projection targets is expected to advance our understanding of them at a circuitry level.

Furthermore, this discovery regarding the characteristics of AI neurons implies that the insular cortex can induce a bottom-up process in response to salient stimuli (strong sensory stimuli). This result corresponds with knowledge accumulated so far regarding how the insular cortex acts as an interface between social and emotional modules in the ‘social decision-making network’.