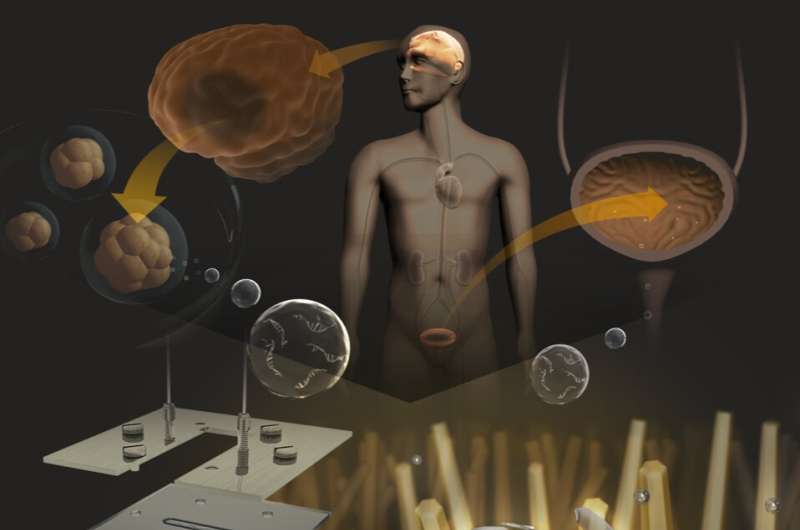 A recent study by Nagoya University researchers revealed that microRNAs in urine could be a promising biomarker to diagnose brain tumors. Their findings, published in the journal ACS Applied Materials & Interfaces, have indicated that regular urine tests could help early detection and treatment of brain tumors, possibly leading to improved patient survival.

Early diagnosis of brain tumors is often difficult, partly because most people undergo a brain CT or MRI scan only after the onset of neurological deficits, such as immobility of limbs, and incapability of speech. When brain tumors are detected by CT or MRI, in many cases, they have already grown too large to be fully removed, which could lower patients’ survival rate. From this perspective, accurate, easy, and inexpensive methods of early brain tumor detection are strongly desired.

As a diagnostic biomarker of cancerous tumors, microRNAs (tiny molecules of nucleic acid) have recently received considerable attention. MicroRNAs are secreted from various cells, and exist in a stable and undamaged condition within extracellular vesicles in biological fluids like blood and urine. Nagoya University researchers focused on microRNAs in urine as a biomarker of brain tumors. “Urine can be collected easily without putting a burden on the human body,” says Nagoya University Associate Professor Atsushi Natsume, a corresponding author of the study.

“Urine-based liquid biopsy hadn’t been fully investigated for patients with brain tumors, because none of the conventional methodologies can extract microRNAs from urine efficiently in terms of varieties and quantities. So, we decided to develop a device capable of doing it.”

The new device they developed is equipped with 100 million zinc oxide nanowires, which can be sterilized and mass-produced, and is therefore suitable for actual medical use. The device can extract a significantly greater variety and quantity of microRNAs from only a milliliter of urine compared to conventional methods.

Their analysis of microRNAs collected using the device from the urine of patients with brain tumors and non-cancer individuals revealed that many microRNAs derived from brain tumors actually exist in urine in a stable condition.

Next, the researchers examined whether urinary microRNAs can serve as a biomarker of brain tumors, using their diagnostic model based on the expression of microRNAs in urine samples from patients with brain tumors and non-cancer individuals. The results showed that the model can distinguish the patients from non-cancer individuals at a sensitivity of 100% and a specificity of 97%, regardless of the malignancy and size of tumors. The researchers thus concluded that microRNAs in urine is a promising biomarker of brain tumors.