Shop worker, 24, claims she suffered a stroke that left her arm swinging round ‘with a mind of its own’ before she was paralysed after taking the Pill

A shop worker claims she suffered a stroke that left her arm swinging ‘with a life of its own’ before she was left paralysed after taking the Pill.

Bobbie Jarvis, 24, was sent home from hospital in February after doctors told her she merely had a headache.

But five days later, she had a stroke alone at her boyfriend’s home where she was discovered unconscious in the garden.

It left her arm moving around ‘like a cat’s tail’ for seven days before she began having seizures.

Miss Jarvis has now spent six weeks in hospital after being left paralysed on the left side of her body – and must re-learn how to walk.

She claims doctors blamed the Pill, which she has been on since the age of 17, which caused a blood clot and therefore a stroke.

The chances of this, according to the NHS, are very small. 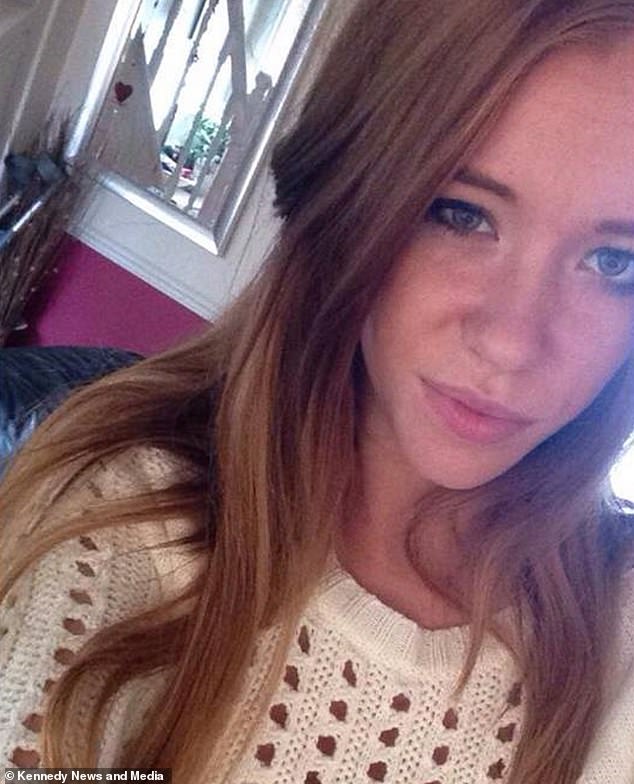 Bobbie Jarvis, 24, of Worcester Park, London, claims she suffered a stroke that left her arm swinging round ‘with a mind of its own’ before she was paralysed on the left side of her body 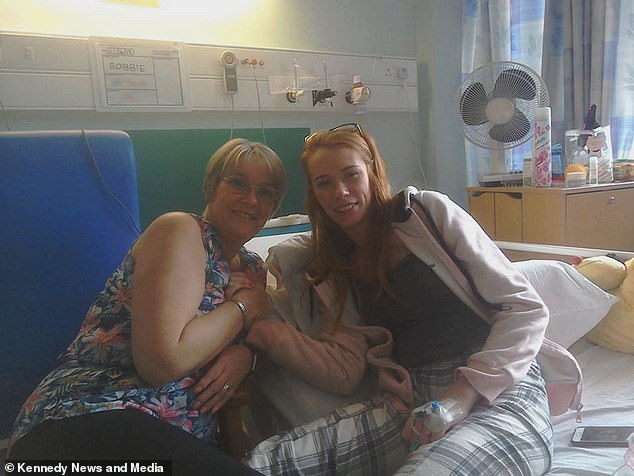 Miss Jarvis spent a month in hospital having repeat seizures and must now re-learn how to walk without help. Pictured, with her mother 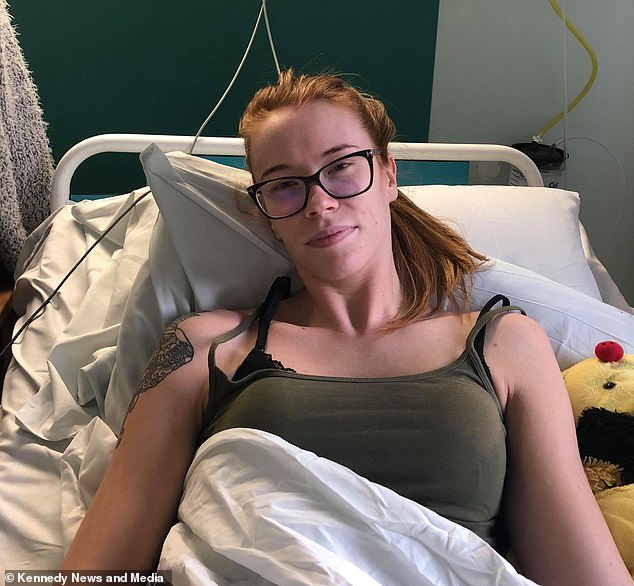 Miss Jarvis claims doctors blamed the Pill, which she has been on since the age of 17, as it caused a blood clot

Miss Jarvis, from Worcester Park in London, said: ‘A stroke is a big shock. For my parents, for my boyfriend. It’s life-changing, unfortunately. I just have to adapt to a new life.’

Miss Jarvis had been prescribed the pill on a repeat prescription when she was 17 but claims she had never been called in for a check-up since then.

She had first seen doctors about her headaches on February 12, but claims doctors told her there was nothing wrong with her.

CAN THE CONTRACEPTIVE PILL CAUSE A STROKE?

The NHS lists stroke as a potential side effect of taking the contraceptive pill but says the risk is ‘very small’.

Doctors intending to prescribe the Pill are expected to carry out tests and decide whether a woman is likely to develop blood clots or have a stroke if they start taking it.

Researchers from Loyola University in Chicago last year published a study confirming the link between the two but saying only the risk of a stroke caused by the brain’s blood supply being blocked by a clot.

Blood clots may be more likely in women taking the pill because oestrogen – a main ingredient of contraceptives – boosts the number of clotting substances in the patient’s blood.

This raises the risk of a clot forming anywhere in the body and, if it becomes dislodged and travels to the brain, it can cause a stroke.

She woke up on February 20 with no headache and decided to drive to her boyfriend’s house.

But while she waited for Christian Henry-May, 26, to return home, she suddenly lost sensation in her arm.

Miss Jarvis said: ‘I had no headache that day and felt completely fine.

‘My hand went numb. I panicked a bit, so I just sat down on the end of the bed and I didn’t know what to think.

‘Next thing I knew, I woke up and I had fallen back and I was trying to hear myself breathe. I knew I needed help but I was trying to find my phone and couldn’t find it.’

Miss Jarvis managed to drag herself off the bed and out the door into the garden.

She said: ‘I don’t really remember much else except hearing myself trying to breathe.’

Mr Henry-May discovered his girlfriend unconscious in his garden and called an ambulance.

‘I remember calling him before I had it to let him know I was there, but if you look at the time history from then to the time the ambulance arrived was about 45 minutes.

‘I was lucky that Christian got there quickly and found me. He picked me up and ran me inside. I think I scared him a bit, I’m not going to lie.’ 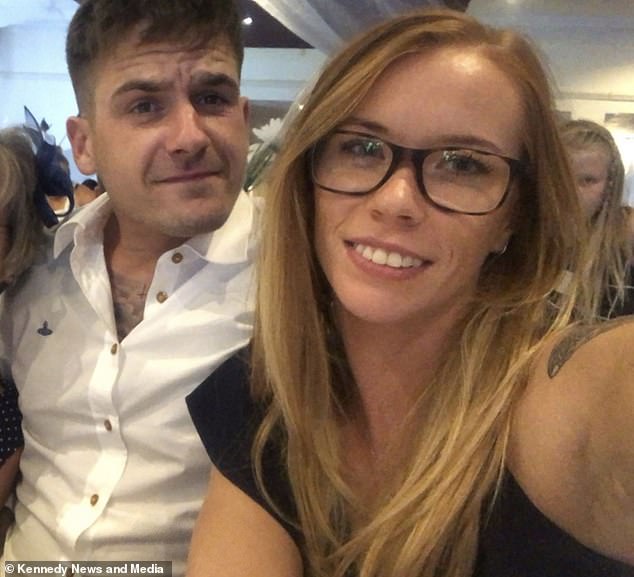 Christian Henry-May discovered Miss Jarvis unconscious in his garden and called an ambulance on February 20. Pictured together before the incident 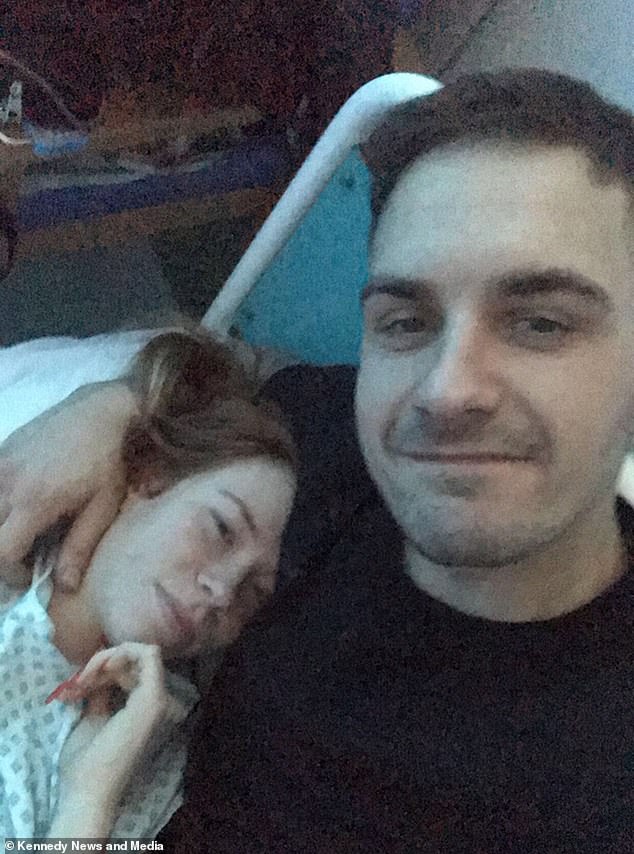 Miss Jarvis, pictured with Mr Henry-May in hospital said: ‘A stroke is a big shock. For my parents, for my boyfriend. It’s life-changing, unfortunately. I just have to adapt to a new life’

Miss Jarvis was taken to hospital where she remained for seven days, in which time her arm was moving uncontrollably for most of the time.

She said: ‘When it first happened, I couldn’t get control of my arm. My arm was going up and down and around my head.

‘It was mad because it was just going round and round like a cat’s tail I couldn’t control.’

At home, Miss Jarvis started having recurring seizures. After the third, she was given medication.

She was admitted to hospital again on March 5 when she suffered a fourth seizure.

She said: ‘The stroke was on the right side on the top of my brain. The swelling got too much [for my brain] which is why I kept fitting.

‘There was a lot of swelling around the bleed. I went temporarily blind in one eye because of the swelling but that’s come back now.’

She is now relearning how to use her left arm and walk after the seizures paralysed them.

Miss Jarvis said: ‘I’ve been in hospital a total of six weeks. I was paralysed on just the left side of my body. The whole of my left leg, left arm, a bit of my shoulder and chest were affected.

‘I’m going into rehab but it’s such a long wait.

‘I’ll be going into rehab to try and get [mobility in] my arms and legs back. I can’t move my arm at all. I can walk a bit on my leg if someone helps to hold me up.’

Miss Jarvis added: ‘At the hospital, they diagnosed that the contraceptive pill had done it. The coating on the pill I was on had caused the reaction.’

The NHS says that taking the combined pill can raise the risk of a blood clot because oestrogen increases the number of clotting agents in the body.

If a blood clot moves and blocks a blood vessel supplying the brain it can cause a stroke.

But the risk is ‘very small’ and doctors will do tests to determine whether a woman is likely to develop a blood clot before prescribing them the Pill. 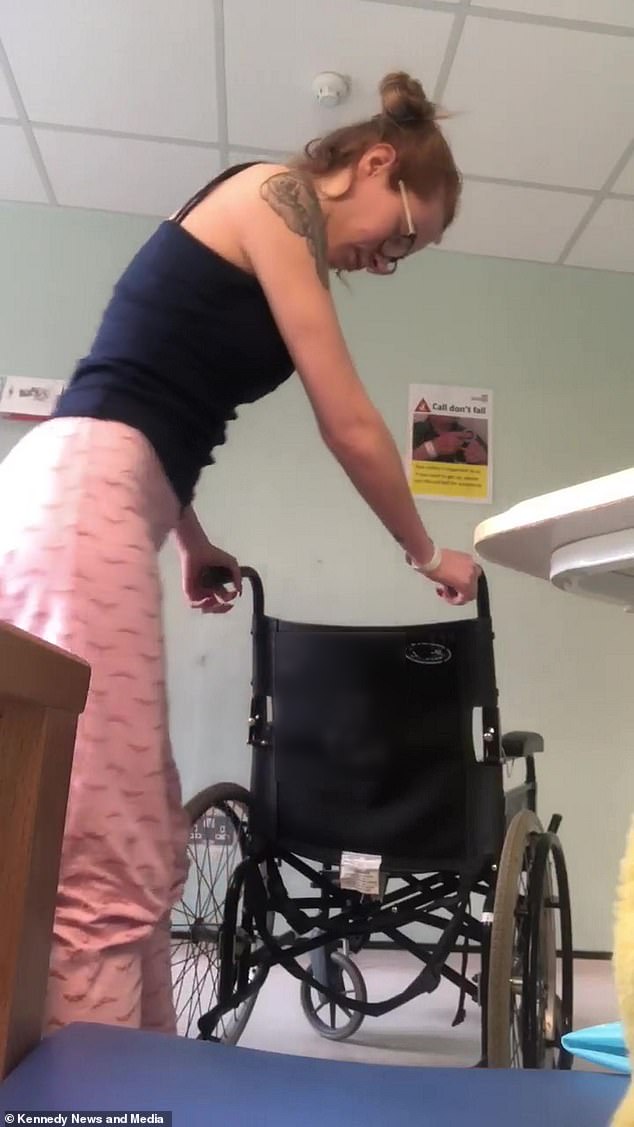 Miss Jarvis said she is waiting to have rehab to learn how to walk again unaided. She said: I can’t move my arm at all. I can walk a bit on my leg if someone helps to hold me up’ 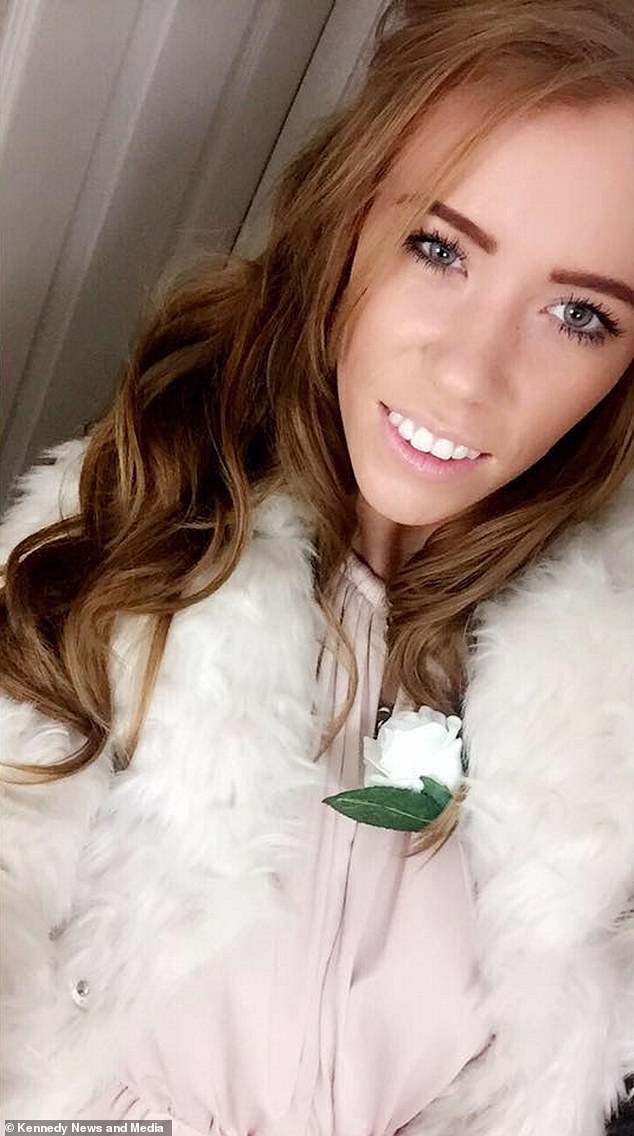 Miss Jarvis said she wishes she knew more about the side effects of her Pill. She said she thinks a doctor should have picked up on how long she had been taking it. Pictured, before the stroke

Doctors say Miss Jarvis will make a full recovery but that it will take a long time – they are unsure how long.

Miss Jarvis said: ‘As long as I get my legs back I will be fine because then I can walk places.

‘I started noticing small changes – like I can move my fingers and bit and my toes. It makes me feel a bit better, like I can recover.

‘I am making progress but it’s taking too long. Obviously I want it to happen quickly but it doesn’t happen like that.

‘You have good and bad days. I’m feeling a bit better about it but some days you do just feel like you can’t do it anymore. You just want your independence back.’

Miss Jarvis said she wishes she had looked into the side effects of contraceptive before.

She said: ‘I can’t go on any pill or contraception now. I wish now that I knew more than I did when I went on it.

‘I had been on it for so long. It had just become normal to me. I was 17 when I first started taking it. I’d been taking it for such a long time.

‘I don’t really know what to think if I’m honest. I think a doctor should have picked up on it, but I also should have known myself. I think we’re both to blame.’

A spokesperson for NHS Sutton CCG said: ‘Sutton CCG wants local people to receive the highest quality standards of care at all times from our healthcare providers.

‘We take patient’s care seriously and if a patient has concerns, we will work closely with them and our healthcare providers to look into the issues raised.

‘We would encourage patients to get in touch with us if they have concerns they wish to raise.’

A St George’s spokesperson said: ‘While we cannot comment on individual patient cases for confidentiality reasons, we urge any patient – including Ms Jarvis – with concerns about their care to contact us directly so we can investigate and answer any queries.’