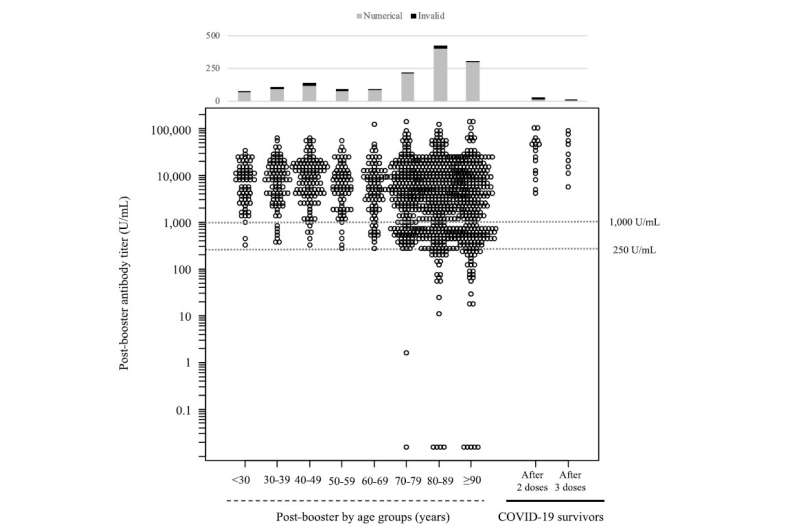 The COVID-19 pandemic has affected millions worldwide and claimed multiple lives. The elderly—aged above 60 years—remain the most vulnerable group. They have been more susceptible in contracting the virus and many have succumbed to the infection. Long-term care facilities (LTCF) and day-care centers for the elderly have become potential sources of virus transmission; unfortunately, a large proportion of the global elderly population is dependent on these establishments.

The recently developed vaccines and boosters have emerged as a shield against COVID-19. They activate the body’s immune system and induce the production of antibodies to neutralize the virus. Carefully planned booster doses of the vaccine act as reinforcements to help keep up the body’s defense against the virus. The extent of this defense, i.e., vaccine-induced immune activation, can be estimated by measuring the titer or concentration of antibodies circulating in the vaccinated person’s body.

It has been suggested that vulnerable groups may have reduced defense despite being vaccinated and receiving boosters. To understand the risk in the vaccinated elderly population, a group of researchers led by Prof. Masanori Nakayama, from the Organization for Research Strategy and Development, Okayama University, and Dr. Hideharu Hagiya, from Okayama University Graduate School of Medicine, set out to assess the body’s immune response in elderly Japanese who had received their third vaccine dose.

Explaining the motivation behind their study, Prof. Nakayama says that “despite vaccinations, several elderly patients in Japan are becoming ill during cluster outbreaks, some being critical. Therefore, we felt the need to investigate the antibody titers post-mRNA COVID-19 booster vaccine in the elderly.”

The team analyzed antibody titers against the COVID-19-causative virus, SARS-CoV-2, after the third booster vaccine had been administered. The study included 1,046 elderly people from 23 different care facilities. Each participant had received two doses of either Moderna or Pfizer mRNA vaccine at least six months prior to the start of the study. A comparison between the antibody titers between the elderly and the young was also drawn for better clarity.

Most often, blood is drawn from the veins for titer analysis, which could be difficult and discomforting for the elderly. To address this problem, the researchers developed a unique solution; they estimated the antibody titers from blood drawn simply from the fingertips. They used the “Mokobio SARS-CoV-2 IgM & IgG Quantum Dot immunoassay” for the point-of-care fingertip whole blood assay and found that the antibody titers were widely distributed in each age group assessed.

The results revealed that the number and proportion of non-responders, i.e., those with antibody titers below 1000 U/mL at any test time after vaccination, increased with age. Nearly 10% of the participants had negligible antibody production despite receiving additional vaccine dose. Also, among the COVID-19 survivors in the assessed clusters, the antibody titers measured after a month were significantly higher when compared with those receiving the third booster dose.

Further analysis showed that the proportion of responders (those with antibody titers above 1000 U/mL) decreased as the age of individuals increased from 70 to 90 years. The researchers speculated the reason for this trend to be the immunological aging of a naturally aging human body. Apparently, people lose their ability to respond to foreign bodies as they age, becoming slow or non-responsive to vaccines. This explains why the elderly are more susceptible to infectious diseases.

These findings have been made available in the Journal of Infection.

As life strives to regain normalcy alongside COVID-19, newer strategies continue to be drawn aiming to keep the world safe from the virus. This study proposes such a strategy keeping the long-term safety of the elderly in mind. Elderly people in the LTCF show a lower response to mRNA booster vaccines and may be apparent non-responders. Thus, it is critical to develop elderly-oriented serological testing protocols after vaccination for better disease management.