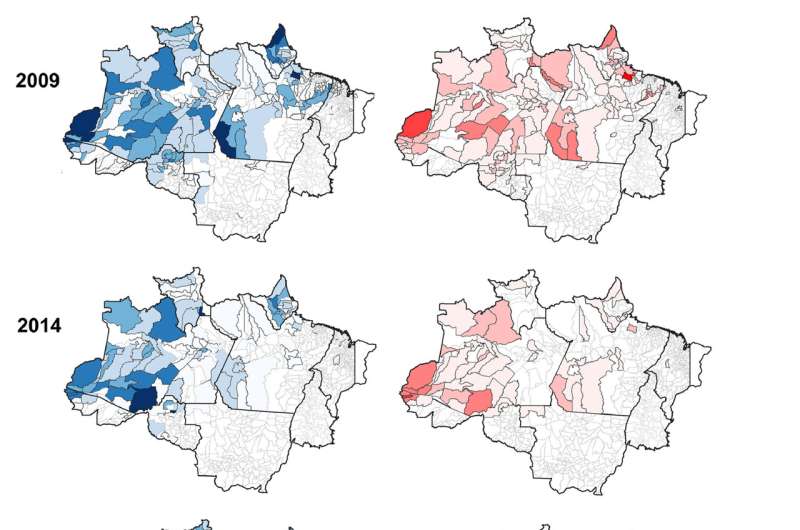 A survey of malaria among pregnant women in Brazil by researchers at the University of São Paulo (USP) has been published in Lancet Regional Health—Americas. According to the researchers, the study is the first to provide insight into autochthonous malaria in pregnancy in terms of spatial and temporal trends.

The findings show that although malaria in pregnancy still represents a major public health problem in the North region of Brazil, and especially in the Amazon, the number of cases fell by half during the period analyzed (2004–18). The reduction was due to expansion of the health service network that provides diagnosis and treatment, the researchers believe, as well as inclusion of artemisinin in the therapeutic scheme from 2006.

They also believe the fall could have been even greater if it were not for the decentralization of public actions to combat malaria across the country due to the autonomy granted to local governments in this area, so that municipal healthcare teams change with every new election.

“Several studies of malaria in pregnancy in Brazil have been published, but none presents a comprehensive survey of the disease, and most were conducted in specific locations or regions. That’s why we set out to investigate the spatial and temporal patterns of malaria in pregnancy in Brazil, and to characterize the population epidemiologically,” Cláudio Romero Farias Marinho, last author of the article, told Agência FAPESP. Marinho is a professor at the Institute of Biomedical Sciences (ICB-USP) and head of its Experimental Immunoparasitology Laboratory.

Pregnant women are one of the high-risk groups for malaria, Marinho noted. The disease is caused by protozoan parasites of the genus Plasmodium transmitted by Anopheles mosquitoes. Pregnant women with malaria risk suffering from severe anemia, premature delivery, miscarriage and stillbirth. The fetus may have microcephaly or intrauterine growth restriction and impaired development after birth.

“Studies have shown that malaria affects development and brain functions, causing cognitive and neurological deficits that can lead to cerebral palsy and epilepsy. It’s also associated with respiratory problems in infancy and increased susceptibility to infections, as well as a heightened risk of developing chronic diseases such as diabetes and hypertension in adulthood,” Marinho said.

These were the reasons for focusing on malaria in pregnancy in the survey conducted by Jamille Dombrowski, a Ph.D. candidate at ICB-USP with a scholarship from FAPESP, in partnership with researchers at the School of Public Health (FSP-USP). The group analyzed data for 61,833 pregnant women with malaria mined from the Ministry of Health’s epidemiological surveillance system (SIVEP-Malaria) for a 15-year period between 2004 and 2018.

The results pointed to high incidence of malaria in pregnancy for municipalities in Acre, Amazonas, Rondônia and Pará, all states of Brazil’s North region. Younger women were most at risk, especially those aged between 15 and 24 years, as the largest proportion of primigravid women (having their first pregnancy) is found in this age group. Specific immunity against the forms of Plasmodium inhabiting the placenta is acquired after several pregnancies and is therefore lower in primigravids.

“It’s important to note that primigravids in the North are very young and have been less exposed to the parasite, so that the organism has less protection against it,” Marinho said.

The study also found evidence that the therapeutic scheme for these patients may not be correct, given the high percentage of reported primaquine. The drug is contraindicated in pregnancy, as it crosses the placenta and can destroy red blood vessels in the fetus, impairing oxygen transport and potentially causing a miscarriage.

The findings of the survey by Marinho and his group can help the Ministry of Health formulate public policy to control malaria and offer better care for pregnant women with the disease. It will be possible to identify areas requiring more surveillance or additional interventions, including specific strategies to protect pregnant women and their babies from the devastating consequences of malaria.

Having produced a complete epidemiological portrait, the researchers are now focusing on early diagnosis of a complication known as placental malaria, characterized by an accumulation of Plasmodium-infected red blood cells in the placenta and fetal membrane. This can only be detected after the baby is born, so that intervention or treatment is not possible.