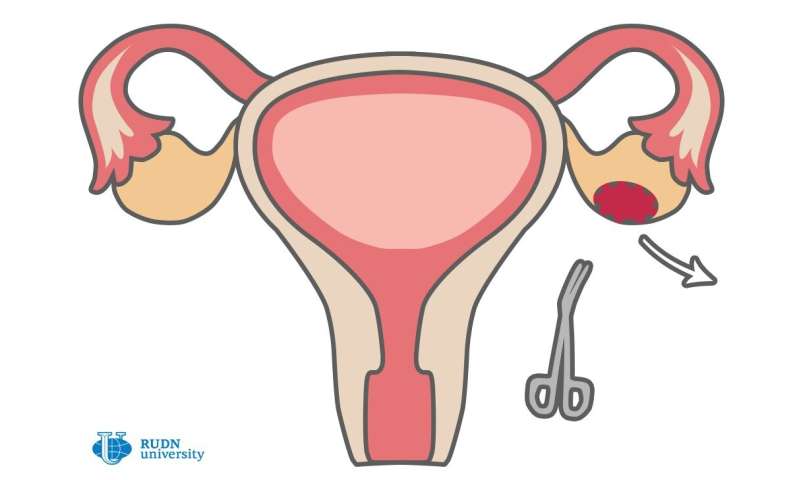 RUDN University physicians have measured the level of the Anti-Müllerian hormone, which indicates reproductive health, in patients with an ovarian cyst, and also assessed the likelihood of pregnancy after cyst removal surgery. The researchers have determined what types of cyst surgery are more effective than other treatments. The results are published in the European Journal of Obstetrics & Gynecology and Reproductive Biology.

One of the causes of infertility in women is endometriosis, pathological growth of the tissue lining the uterus called the endometrium. The resulting growth is called an endometrioma. Sometimes, it occurs on the ovary, and then it is called an endometriotic ovarian cyst. This cyst contains a lot of iron, reactive oxygen species, inflammatory cells and other substances that can damage the surrounding tissue, which leads to infertility. On the other hand, surgical removal of the cyst can affect many healthy tissues. Therefore, with ovarian endometriosis, doctors often face a dilemma: whether to remove it, or attempt an alternative treatment to avoid harming the woman’s reproductive abilities even more with surgery.

Ekaterina Dubinskaya from the Medical Institute of RUDN University and her colleagues decided to find out how successfully the ability to become pregnant after cyst removal surgery of different types can restore.

The study involved 131 patients aged 25-35 years with infertility and diagnosed unilateral endometrioma. All participants took tests to measure the level of Anti-Müllerian hormone (AMH), which is considered a common indicator of the possibility of becoming pregnant. It allows physicians to estimate the remaining ovarian reserve.

Then all the participants underwent cyst removal surgery. The extracted cysts were divided into two types. Type I included endometriomas, which arise from endometrial tissue that has grown into the ovarian tissue. This so-called “true endometrioma” has a tight capsule of replacement tissue. Type II endometriomas occur due to the impact of type I endometriosis on other parts of the reproductive organs. These cysts have a wall that is easily separated from the ovarian tissue during surgery, which is important for the preservation of healthy ovarian tissue.

A month and three months after surgery, the patients were tested for AMH levels, and also divided into two groups—those with normal and low levels of the hormone. A year later, researchers counted how many of them became pregnant. Depending on the results, the patients were divided into four groups: with normal or low levels of hormone and one or the other type of cyst.

Before surgery, 58.3 percent of women with normal AMH levels (42 out of 131 participants) had secondary infertility. At the same time, 70 percent of them had type II endometrioma. In women with such a cyst, the level of AMH before and after surgery did not differ significantly. Instead, in patients with type I endometrioma and normal AMH levels (18 participants), hormone levels decreased a month after surgery (from 1.24 ng/ml to 0.41 ng/ml), but after three months rose slightly (to 0.48 ng/ml).

Patients with type II cysts after surgery became pregnant, in general, more easily than those with type I cysts (percentage of pregnancies—37.5 percent vs. 26.2 percent, or 31 pregnancy vs. 18), while the level of AMH could be normal and low. Also, the RUDN University physicians showed that the cyst removal surgery of both types increases the frequency of pregnancies—in the study, 42.2 percent of women became pregnant after surgery. As for whether the cyst and surgery damage healthy ovarian tissue, the study showed that it depends on the technique of intervention and the location of the cyst.