Drinking six or more cups of coffee a day drastically reduces the risk of developing gallstones, according to a study.

The high intake slashed the chances of getting the painful ailment by 23 per cent, compared to those who did not drink any coffee at all.

Researchers analysed official health and lifestyle data among 104,500 adults, who were tracked for up to 13 years. 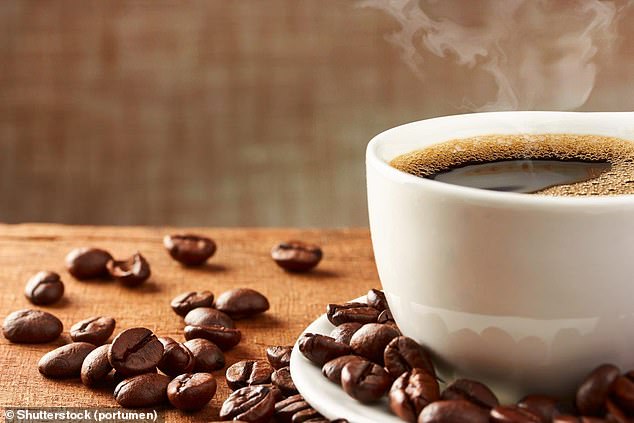 Researchers think it is the caffeine in coffee which kick-starts brown fat reserves and triggers the body’s fat and sugar burning processes, potentially leading to weight loss (stock image)

They compared how much coffee participants drank with whether or not they had ever suffered from symptomatic gallstone disease (GSD).

The study was conducted by a team from the Copenhagen University Hospital in Denmark.

Drinking just one cup a day lowered the risk of GSD by three per cent but the biggest effect was from drinking several cups each day.

European guidelines recommend no more than 400mg of caffeine per day – a cup of coffee contains anywhere from 70 to 140mg.

Gallstones are lumps of solid material that form in the gallbladder.

In the UK, up to one in 10 adults have the condition. It affects around 15 per cent of people in the US.

Gallstones can resemble grains of sand or large pebbles.

They are formed from chemicals in bile and can consist of just cholesterol, a mixture of calcium and a pigment from red blood cells, or a combination of the two.

Gallstones have been linked to high-cholesterol diets, as well as liver damage and fasting.

Most people are unaware they have gallstones. The most common symptom is abdominal pain, which can last up to eight hours and be severe.

This may be mistaken for a heart attack. Pain occurs due to the gallbladder trying to expel the stones.

If gallstones have been discovered via a scan for something else and are not causing symptoms, they are often left without treatment.

Gallbladder inflammation may require antibiotics to be administered in hospital.

Severe symptoms may lead to people having the organ removed.

The gallbladder, which is involved in digestion, is not essential for life.

Gallstones are lumps of solid material that form in the gallbladder. In the UK, up to one in 10 adults have the condition.

Gallstones, which can resemble grains of sand or large pebbles, are formed from chemicals in bile and can consist of just cholesterol, a mixture of calcium and a pigment from red blood cells, or a combination of the two.

They have been linked to high-cholesterol diets. Most people are unaware they have them.

The most common symptom is abdominal pain, which can last up to eight hours and be severe.

The researchers said caffeine is released via bile and contains chemical compounds called methylxanthines that stimulate production of acid. They said this may prevent the cholesterol forming gallstones.

The research team, led by Ask Tybjaerg Nordestgaard of the university’s department of clinical biochemistry, said: ‘A coffee-induced increase in bile acid production could reduce the risk of cholesterol gallstones.

‘Moreover, coffee has been shown to induce UGT1A1, the enzyme responsible for conjugation of bilirubin. Elevated levels of unconjugated bilirubin in bile is a causal risk factor for gallstone formation.’

The findings come after a Harvard University study linked coffee to migraines.

Researchers found that drinking three or more cups a day substantially increased the risk of an attack.

The study tracked 98 sufferers of ‘episodic’ migraines – defined as having the debilitating headaches on up to 14 days a month.

They found that drinking up to two cups of coffee or other caffeinated drinks made no difference to their chance of a migraine.

But when they drank three cups, the risk of having an attack the same day went up by 40 per cent. If they had five cups, it rose by 161 per cent.

The researchers, whose findings are published in the American Journal of Medicine, said the impact of caffeine on migraines is complex because it depends on dose and frequency. And while it may trigger an attack, it can also have a painkilling effect.

And pregnant women have been warned against drinking more than two cups of coffee a day as it can damage the baby’s liver.