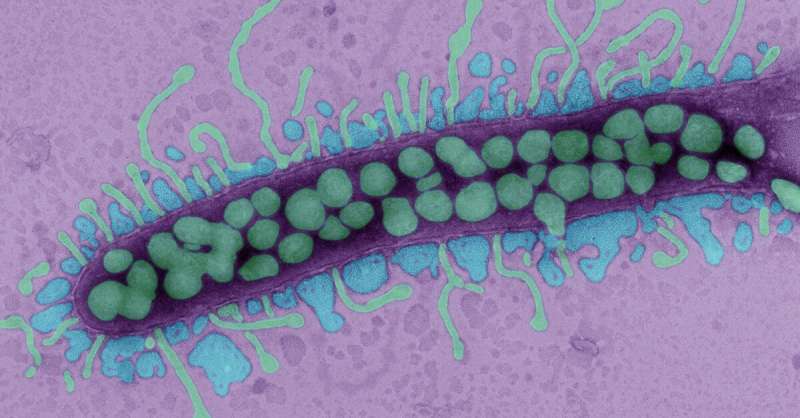 Cystic fibrosis (CF) is an inherited disorder that causes severe damage to the lungs and other organs in the body. Nearly 40,000 children and adults in the United States live with CF, an often difficult existence exacerbated by an opportunistic bacterium called Pseudomonas aeruginosa, which is a major cause of chronic, life-threatening lung infections.

P. aeruginosa infections are not easily treated. The pathogen can be resistant to most current antibiotics. However, an early-stage clinical trial led by scientists at University of California San Diego School of Medicine, with collaborators across the country, has launched to assess the safety and efficacy of treating P. aeruginosa lung infections in CF patients with a different biological weapon: bacteriophages.

Bacteriophages are viruses that have evolved to target and destroy specific bacterial species or strains. Phages are more abundant than all other life forms on Earth combined and are found wherever bacteria exist. Discovered in the early 20th century, they have long been investigated for their therapeutic potential, but increasingly so with the rise and spread of antibiotic-resistant bacteria.

In 2016, scientists and physicians at UC San Diego School of Medicine and UC San Diego Health used an experimental intravenous phage therapy to successfully treat and cure colleague Tom Patterson, Ph.D., who was near death from a multidrug-resistant bacterial infection. Patterson’s was the first documented case in the U.S. to employ intravenous phages to eradicate a systemic bacterial infection. Subsequent successful cases helped lead to creation of the Center for Innovative Phage Applications and Therapeutics (IPATH) at UC San Diego, the first such center in North America.

In 2020, IPATH researchers published data from 10 cases of intravenous bacteriophage therapy to treat multidrug-resistant bacterial infections, all at UC San Diego. In 7 of 10 cases, there was a successful outcome.

It will consist of three elements, all intended to assess the safety and microbiological activity of a single dose of intravenous phage therapy in males and non-pregnant females 18 years and older, all residing in the United States.

The dose is a cocktail of four phages that target P. aeruginosa, a bacterial species commonly found in the environment (soil and water) that can cause infections in the blood, lungs and other parts of the body after surgery.

For persons with CF, P. aeruginosa is a familiar and sometimes fatal foe. The Cystic Fibrosis Foundation estimates that roughly half of all people with CF are infected by Pseudomonas. Previous studies have indicated that chronic P. aeruginosa lung infections negatively impact life expectancy of CF patients, who currently live, on average, to approximately 44 years.

In the first stage of the trial, two “sentinel subjects” will receive one of three dosing strengths of the IV bacteriophage therapy. If, after 96 hours and no adverse effects, the second stage (2a) will enroll 32 participants into one of four arms: the three doses and a placebo.

After multiple follow-up visits over 30 days and an analysis of which dosing strength exhibited the most favorable safety and microbiologic activity, i.e. most effective at reducing P. aeruginosa, stage 2b will recruit up to 72 participants to either receive that IV dose or a placebo.

Enrollment will occur at 16 cystic fibrosis clinical research sites in the United States, including UC San Diego. It is randomized, double-blind and placebo-controlled. The trial is being conducted through the Antibacterial Resistance Leadership Group and supported by the National Institute of Allergy and Infectious Diseases, part of the National Institutes of Health, with additional support for the UC San Diego trial site from the Mallory Smith Legacy Fund.

Mallory Smith was born with cystic fibrosis and died in 2017 at the age of 25 from a multidrug-resistant bacterial infection following a double lung transplant.

“Mallory’s death was a preventable tragedy,” said her mother, Diane Shader Smith. “We are supporting the IPATH trial through Mallory’s Legacy Fund because Mark and I deeply believe in the promise of phage therapy to save lives by combatting multidrug-resistant bacteria.”

In an article published in 2020 in Nature Microbiology, Schooley and Steffanie Strathdee, Ph.D., associate dean of global health sciences and Harold Simon Professor in the Department of Medicine and IPATH co-director, describe phages as “living antibiotics.”

As such, said Schooley, researchers need to learn how to best use them to benefit patients through the same systematic clinical trials employed to evaluate traditional antibiotics.

The primary objectives of the new trial are first to determine the safety of a single IV phage dose in clinically stable patients with CF who are also infected with P. aeruginosa, said Schooley.

“Second, it’s to describe the microbiological activity of a single IV dose and third, to assess the benefit-to-risk profile for CF patients with P. aeruginosa infections. This is one study, with a distinct patient cohort and carefully prescribed goals. It’s a step, but an important one that can, if ultimately proven successful, help address the growing, global problem of antimicrobial resistance and measurably improve patients’ lives.”