One MILLION people paid too much for NHS prescriptions last year because they spent £8.80 every time instead of buying a ‘season ticket’

More than a million people could have saved money on their prescriptions last year by buying a ‘season ticket’.

Research has found 1,042,098 people in England paid the full price for more than 12 prescriptions, spending more than the cost of a prescription prepayment certificate.

A prescription prepayment certificate (PPC) is essentially a season pass which, for a one-off fee of £104, covers the cost of all prescriptions for a year.

Patients without a PPC or an exemption for reasons such as pregnancy, a low income or a long-term illness have to pay the full £9 for each prescription. 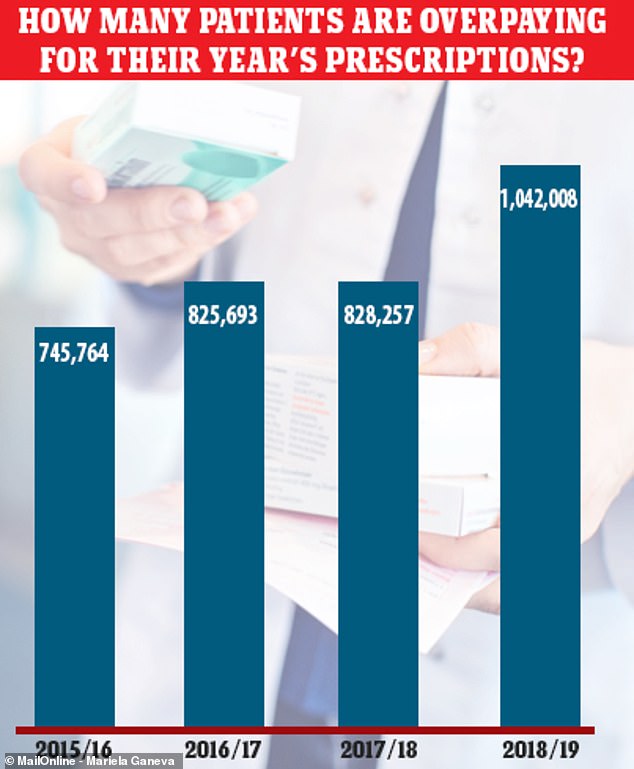 Research has found 1,042,098 people in England paid the full price for more than 12 prescriptions last year, spending more than the cost of a prescription prepayment certificate

An investigation by the personal finance website Money Saving Expert found more than a million people were wasting money paying the full price.

‘These figures show that an increasing number of patients are paying more than they need to for medicine and other items prescribed on the NHS,’ said Steve Nowottny, the site’s news editor.

‘And while in some cases that will be due to unexpected illness, in other cases there will be people who do expect to need 12 or more prescriptions who are simply overpaying unnecessarily.’

The research shows the number of patients who are missing out has risen significantly over the past four years.

WHAT IS A PRESCRIPTION PREPAYMENT CERTIFICATE?

A patient can pay £104 for a whole year or £29.10 for three months and, for that fixed price, they could get as many prescriptions as they need.

Anyone can buy one of the certificates and they simply have to show their details to a pharmacist when picking up a prescription.

After a price rise in April this year, prescriptions now cost £9 each. So the PPC pays for itself after 12 individual prescriptions.

To buy a PPC go to the NHS’s website by clicking here.

Patients included in the data are buying, on average, 16 items over the course of the year. But the 13th item onwards would have been free if they’d had a PPC.

Because prescriptions cost £8.80 during the year covered by the investigation, the team estimated each patient could have saved an average of £35 on their meds.

Mr Nowottny added: ‘While the NHS has worked hard to promote these “season tickets” in recent months, it’s clear there’s still a real lack of awareness.

‘It must do all it can to make sure all those that need the scheme can take advantage of it.’

For those who are temporarily ill or can’t afford the full £104 there are also shorter-term options in the form of a three-month certificate costing £29.10.

PPCs are not the same as exemption certificates, which are given to people who are entitled to free prescriptions because of a long-term condition or low income.

Fines sent to patients who should have paid for their prescriptions totalled £126million in 2018-19, a 10-fold increase from £12million four years earlier.

The Government’s National Audit Office, which published the figures, said the NHS is losing money in part because its prescribing system is too complicated.

And the Royal Pharmaceutical Society added it would be simpler if prescriptions were free for everyone.

Almost a third of patient fines (30 per cent) were found to have been sent in error but the NHS is still owed £246million by people who haven’t paid up since 2014.