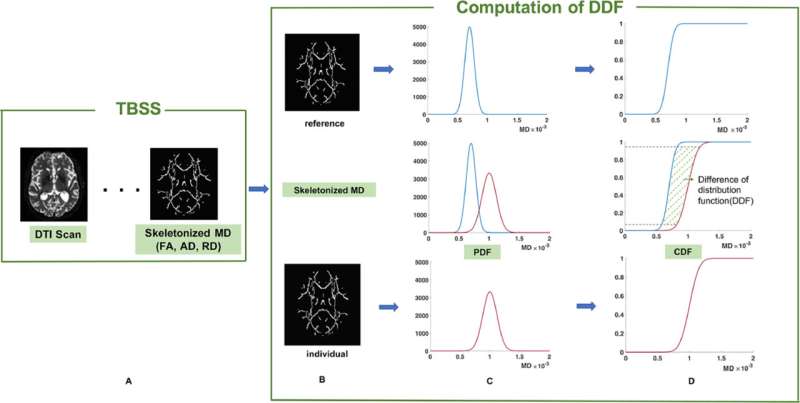 The findings, published in NeuroImage, indicate that the measure—named “Difference in Distribution Function’ will ultimately assist in monitoring the aging process and brain changes seen in Vascular dementias and Alzheimer’s disease.

Diffusion Weighted Imaging has been the most widely recognized neuroimaging technique for evaluating the microstructure of white matter in the brain, with white matter integrity critical to normal brain structure and function. Various diffusion weighted imaging measures have been developed to investigate white matter but all have had inherent limitations.

Leader of CHeBA’s Neuroimaging Group Associate Professor Wei Wen said that there was a distinct need for an enhanced neuroimaging measure to be developed to overcome these limitations and particularly be able to more effectively and comprehensively describe changes to the white matter.

Lead author Dr. Jing Du said that white matter is important because it is vulnerable to the effect of vascular risk factors.

“It is possible that aging brains suffer significant micro-structural changes due to vascular factors before functional changes are obvious, such as cognitive decline and impact on memory,” says Dr. Du.

“The improved measure we have created also differentiates diseased brains from healthy ones,” said Dr. Du.

The researchers developed the new measure using study participants from the UK Biobank and validated the measure in healthy brains through CHeBA’s Sydney Memory and Aging Study and a study addressing cerebral small vessel disease. The improved diffusion imaging measure has shown to be highly associated with age and cognition across all three cohorts and better explains variance of the changes related to age and cognition than established Diffusion Weighted Imaging measures.

“The sensitivity of tracking the brain aging process allows this improved measure to be a biomarker applied for monitoring the structural and functional changes in both healthy and diseased brains, expanding our research potential.”