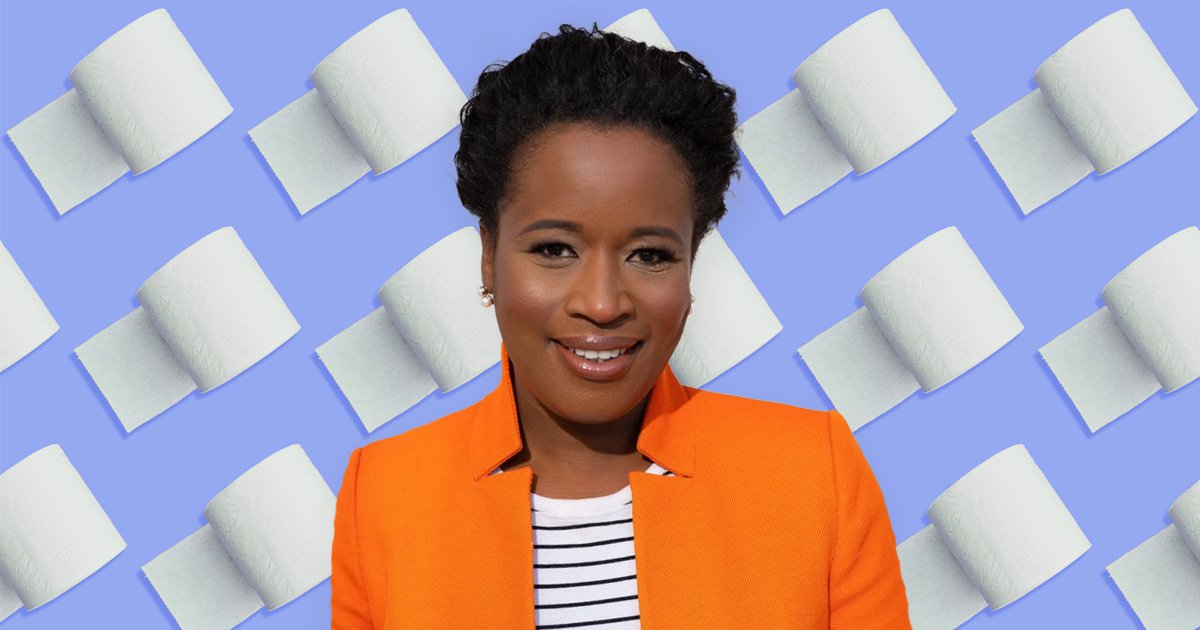 Stools, poo, faeces – whatever you call it, no one likes to talk about it. But should you spot something amiss with your bowel movements then it is vital to seek help promptly.

It’s something ITN newsreader and Loose Women presenter Charlene White knows all too well. The 40-year-old lost her mother to bowel cancer in 2002 and now, as patron of Bowel Cancer UK, she wants to stop others going through the same experience.

‘People feel funny about talking to their GP about it,’ says Charlene. ‘But it’s just poo, for goodness sake. We all do it. Every single human being in the world does a poo. It’s bizarre we find it so strange to talk about.’

Charlene’s mother Dorrett, a social worker, was diagnosed with bowel cancer when Dorrett was 42 and Charlene was 16, Charlene’s sister Carina was 11 and younger brother Joshua was just three-years-old.

‘Sometimes she would have chemotherapy in the morning and then go to work. Other times she would have to stay in hospital for the treatment. I remember when she stayed in hospital we would bring in a portable TV from home and we’d all pile on to her bed and do our homework while watching Coronation Street,’ says Charlene. ‘It just became a way of life for us.’

Dorrett’s children were, however, unaware of the grim prognosis she faced. ‘In those days the prognosis was only five years but I wasn’t aware of that,’ says Charlene.

‘The internet was around but people didn’t use it all the time back then. Today, if a parent was diagnosed with cancer, a 16-year-old would research it on the internet straight away, but I didn’t. We took it day by day. It’s amazing as a kid how your mum being in hospital every other week becomes normal.

‘Because there were times she was having chemo and times she wasn’t, I just thought that’s how life would continue. That she’d be in and out of hospital. I didn’t think that, in the end, it would mean she wouldn’t be here anymore. I didn’t think it would kill her. I was living in my own teenage bubble.’

While Dorrett and Charlene’s dad, Dennis, a postman, continued to fit in Dorret’s cancer treatment around their work, Charlene took on more responsibilities at home – looking after her younger siblings, taking her brother to and from school, cooking and going to parents’ evenings.

‘My parents were clever in that they slowly gave me more responsibility from the time she was diagnosed. It meant it wasn’t such a shock when she died and I had to juggle work and childcare.

‘Mum’s cousin came over from Jamaica to help look after us when Mum became really ill. Mum stayed at home. She didn’t want to go into a hospice. She thought it would be easier for us not having to keep going into a hospice and she was right.’ Dorrett died when Charlene was 21.

‘There were lots of opportunities I could have taken up if I hadn’t chosen to stay close to home,’ says Charlene who remained in London, where her family lived, to go to university rather than studying further afield. She also passed up the opportunity of a job in New York.

‘I’m the eldest so I knew it wasn’t fair to go off to uni or work abroad when my family were going through stuff and we needed to get through it together. I don’t have regrets about any of it – that’s the point of family. When your family needs you, you do the right thing. But when my friends talk about living with housemates at uni I don’t have those experiences.

‘And it would have been amazing to go to New York but would I have enjoyed it knowing my sister and brother were still here adjusting to not having mum around? No.’

Charlene hopes to raise awareness of bowel cancer and wants to encourage people worried about potential symptoms to talk to their GPs.

‘Don’t be ashamed of doing a poo and noticing what’s in your poo,’ she says.

‘Having lost someone to bowel cancer it seems ludicrous anyone would be embarrassed talking about anything to do with their body. And early diagnosis is the difference between life and death.

‘Because my mum was diagnosed when she was 42, I have regular checks. We’re not at a stage where we can stop people getting cancer but hopefully we can encourage people to get diagnosed and treated at an early stage.

‘I’ve got two young children. I look after myself and go to screenings because I don’t want them to go grow up without me.’

Over the past 40 years, according to the charity Cancer Research, bowel cancer survival rates have more than doubled.

These days almost six in ten people diagnosed with bowel cancer in the UK survive their disease for five years or more.

In the 1970s, little more than a fifth of people diagnosed with bowel cancer survived their disease beyond ten years. These days, it is 60 per cent.

The importance of catching cancer diagnosis early cannot be overestimated. When diagnosed at its earliest stage, 98 per cent of people with bowel cancer will survive their disease for one year or more, compared with 44 per cent when the disease is diagnosed at the latest stage.

Symptoms that should ring alarm bells

Professor of Clinical Oncology Mark Saunders explains what to look out for, and when to head to your GP.

The main symptoms of bowel cancer are bleeding and a change of bowel habits. For example, if you usually go once a day but suddenly start going four times a day.

It could be a range of other things, such as irritable bowel or Crohn’s disease, but we don’t want to miss any cases of bowel cancer. We’d recommend people in their forties and over seek advice from their GP about any bleeding or change of bowel habit.

If the stool has a lot of mucus that can also be a sign that something’s happening. See your GP and they can examine you and refer you for a colonoscopy if necessary.

When people delay going to the GP they can then arrive with an advanced cancer we can’t treat. Sometimes the GP might miss bowel cancer in younger people as well – the patient can go several times and not be referred. If you have symptoms and don’t get a satisfactory result from your GP then go again. Any doctor should think. ‘If a person comes twice there’s something wrong here.’

The treatments are surgery, chemotherapy and radiotherapy, and all of these are significantly better now than when I started 20 years ago. Everyone in England and Wales over the age of 60, and over the age of 50 in Scotland, is supposed to be sent a bowel cancer screening test every two years, so make sure you complete those.

How to get your Metro newspaper fix

Metro newspaper is still available for you to pick up every weekday morning or you can download our app for all your favourite news, features, puzzles… and the exclusive evening edition!