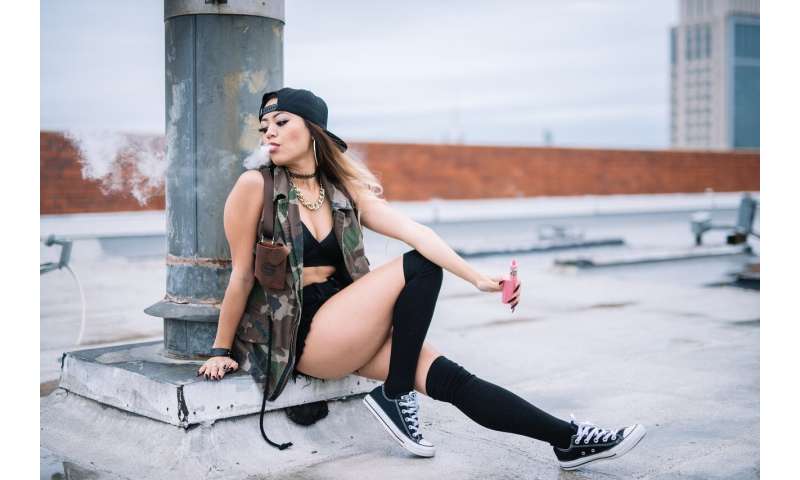 Some may consider vaping safer than smoking traditional cigarettes, but new research from the UNC School of Medicine suggests that using e-cigarettes long-term may lead to a higher risk of emphysema.

In the study, lung fluids were sampled from 41 people—smokers, vapers and non-smokers. Researchers found that vapers, like smokers, had higher levels of protease enzymes—a trait that tends to cause emphysema.

“If they keep using these products for about 20 years, it is likely that they will get emphysema,” Robert Tarran, the professor who led the study, told The News & Observer.

Emphysema is a lung condition that causes a shortness of breath as a result of damage to the lung tissue, according to the American Lung Association.

The study, published this month, comes as the number of people hospitalized with lung-related illnesses possibly connected to vaping continues to rise. According to the Centers for Disease Control and Prevention (CDC), 153 possible cases of severe lung illness associated with e-cigarettes were reported from June 28 to Aug. 20 around the country, including in North Carolina.

E-cigarettes come in many forms, but they all heat chemical “e-liquids” in detachable cartridges that contain nicotine and flavors so users can inhale vapors, or “vape.” Because of the health risks associated with cigarettes, e-cigarettes have emerged as an alternative form of nicotine consumption.

Tarran specializes in e-cigarette research and is a member of the Marisco Lung Institute at the UNC School of Medicine. He plans to continue his research and conduct studies on a wider group of about 100 people.

Other studies have shown vaping to be harmful. But many of the e-cigarette liquids that are researched may no longer be on the market by the time the results are available.

“It is such a fast field, and it takes a long time to study, so by the time we have our results, people may be consuming new e-liquids,” Tarran said.

E-liquids have varying but consistently high amounts of tobacco and varying “toxicity” as a result of different combinations of chemicals, according to a database of e-liquids.

On Thursday, people in downtown Raleigh milled about on Wilmington Street for smoke and vaping breaks. Craig Donnelly, who works as a quality engineer downtown, said he has been using e-cigarettes for three years. He started using them as an experiment to see if he could get his friends to quit smoking cigarettes.

He said if people are educated about what they are vaping, there will not be as many health hazards. He gestured to his e-cigarette and the e-liquid he was using.

“The majority of people don’t learn about what they are smoking,” he said. “I know who makes these and what they put in them.”

But consumers may find it more difficult to identify the source of e-liquids. For example, Amazon sells empty packaging for brand names like Dank Vapes, Cali Plug and Dabwoods, which could lead consumers to believe they are buying a legitimate product when it has been modified.

North Carolina Attorney General Josh Stein has sued JUUL, the biggest e-cigarette company in the country, saying that the company is targeting minors with its products and has lied about the products’ safety, The News & Observer reported in May.

As school begins in Wake County next week, the school district has put up signs saying e-cigarettes are prohibited, in addition to traditional tobacco products, according to ABC11, The N&O’s news partner. Students also will learn about the effects of vaping in coursework, ABC11 reports.

JUUL provided a statement to ABC11 Thursday, saying it has implemented a “comprehensive action plan to combat underage access, appeal and use of JUUL products,” which includes strengthening age-verification and shutting down its social media accounts. JUUL said its products are not targeted to non-nicotine users.