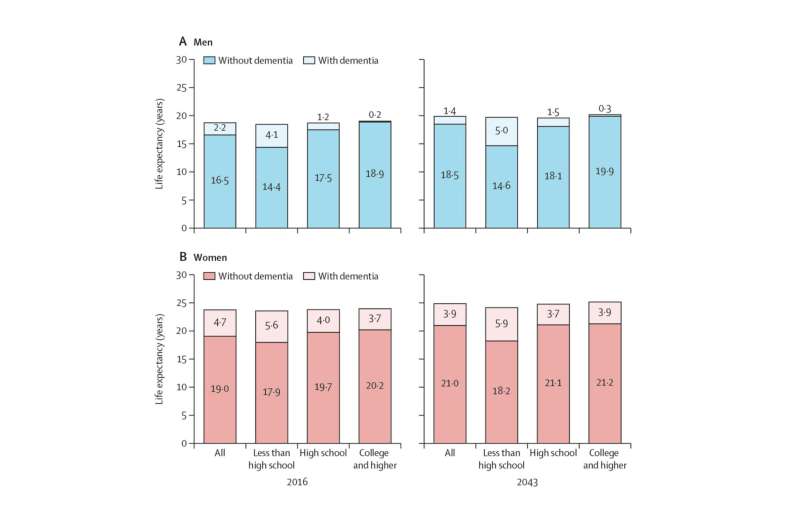 A new detailed microsimulation, using a database of 40 million people, has examined the future of Japan’s aging population up to 2043. It projects that more people will live longer, and that overall years spent living with dementia will decrease. However, the model highlighted the diversity of impacts on different segments of the population, as Japanese women with a less than high school education and aged 75 and over may be disproportionately affected by both dementia and frailty. Better understanding where health gaps like this exist can help inform public health planning, to minimize future economic costs and support those most in need.

Taking care of the older members of society is a common concern around the world. Japan is famous for its long-lived residents, the number of which continues to rise. In 2020, almost 30% of the Japanese population was aged 65 years or older, and this age group is not projected to peak until 2034. Caring for people with age-related ailments, such as dementia and frailty, poses a challenge both to individuals and public health care systems.

Microsimulation models, which are computer models that can provide detailed analysis on an individual basis, are currently used to project future population health in some countries, such as the U.K. and the U.S. Professor Hideki Hashimoto and researchers at the University of Tokyo, along with researchers from Stanford University in the U.S., wanted to create a new microsimulation model for Japan, which would take into account more diverse conditions than had been considered before.

“We developed a new Japanese microsimulation model that accounts for 13 chronic conditions (including heart disease, stroke, diabetes, depression and dependency), as well as frailty and dementia,” explained Hashimoto. “Using an ultra-large data system, we were able to ‘follow’ a virtual cohort of more than 40 million people aged 60 and over from 2016 to 2043.”

According to Hashimoto, projections of aging in Japan usually rely on the “average” status of older people and so don’t consider the diversity of the population. “I believe that problems of aging are a matter of health gaps over the course of people’s lives,” he said. “Our projection brings attention to a widening health gap among older people. It highlighted that women with a less than high school education aged 75 or over are more likely to be affected.”

Identifying where health gaps like this exist could be used to better inform public policy, not only about health care but other influential aspects of life. “Japan’s case may suggest that improvement in educational attainment, as well as population health, could be a key to making a healthier and more manageable aging society,” said Hashimoto.