A 33-year-old man died in his parents’ house when a solo sex act involving a gas mask and plastic bag on his head went wrong.

The man was found by his mother at about 11pm wearing his work overalls with the fly undone, a gas mask over his nose and mouth and a bag over his head.

A postmortem exam ruled out suicide and said his death was accidental. 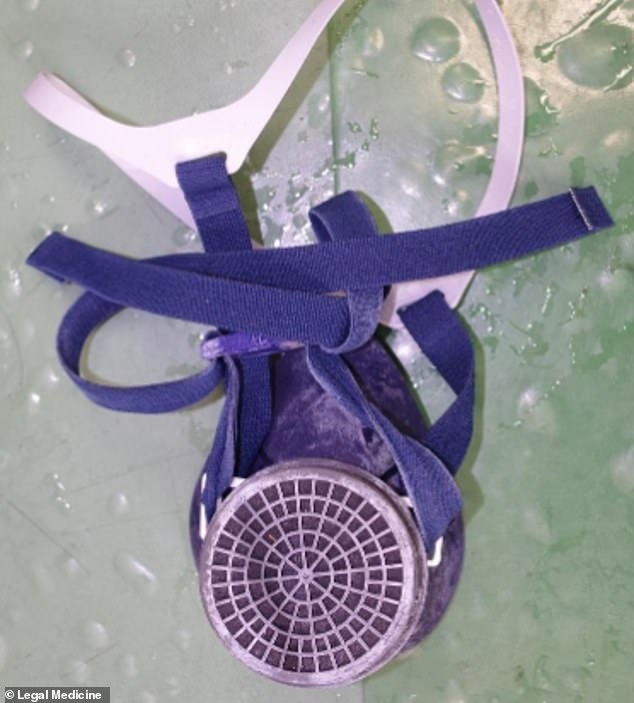 The report, published in a medical journal, makes clear the dangers of autoerotic asphyxiation, which involves choking oneself for sexual pleasure.

Doctors at a school of medicine in Kyoto, Japan, reported what they called an ‘atypical’ case.

The man was otherwise healthy and had been at work all day at an electrical equipment shop until coming home at around 8pm and eating his dinner.

He then went upstairs to his room in the house he shared with his parents and grandmother, and wasn’t seen again until his mother found him laying dead on the floor that night.

Paramedics rushed him to hospital but doctors confirmed he was dead and that he had suffocated as a result of his misadventure.

He was wearing a ‘worn-out’ purple gas mask and had a plastic bag covering his whole head.

HOW DOES CUTTING OFF OXYGEN KILL YOU?

The human body needs oxygen to function because cells use it to produce energy – without oxygen muscles, organs and other tissues die.

The first effect of cutting off someone’s oxygen supply is that they will pass out because of the interruption to the brain’s blood supply.

Within a couple of minutes this can cause irreversible brain damage as the tissue starts to die.

The lungs can’t get any air into the body so the lack of oxygen in the red blood cells then starts to take its toll on the rest of the body.

The heart muscle cannot function without oxygen and a lack of it causes degeneration of the tissue in the heart and an ability of it to move.

If the heart no longer has enough energy to move it will go into cardiac arrest – a heart attack – which can be fatal.

Even if someone can be resuscitated, depending on how much time they have been unconscious, they may have suffered irreparable damage to the brain or heart which could leave them brain damaged, seriously ill or kill them in the future.

Although he was fully clothed, the zipper of his trousers had been opened and he wasn’t wearing any underwear.

In the absence of any injuries, mental health problems, or note or will, it was ruled there was no reason to suggest the man had killed himself on purpose.

Instead, he was ruled to have been trying to pleasure himself – investigators found evidence of a bondage or masochism fetish.

Pornographic videos and magazines were found in his wardrobe alongside sex toys, and his computer also contained images of people who had been bound or were wearing rubber suits.

‘Because of the circumstances at the time of discovery and the fact that it was a sudden death, we considered the cause of death to be suffocation,’ said Dr Hiroshi Ikegaya and his team.

It can take less than a minute for someone to pass out from a lack of oxygen and they may suffocate within just a few minutes.

This highlights the danger in which people put themselves when trying to cut off their air supply for sexual pleasure.

The Kyoto team gave various other examples of people in Japan who had died in similar ways, and said rates vary around the world from between 0.1 and 0.6 deaths per million people.

They said their research offered insight into what police and coroners should look for when determining a cause of death, and shed light on how autoerotic asphyxiation in Japan was similar to elsewhere in the world.

The paper was published in the journal Legal Medicine.

If you or someone you know is struggling with mental health issues or suicidal thoughts contact Samaritans for free on 116 123 or samaritans.org.