Many of us have hang-ups about food: having "good" and "bad" foods, not eating at certain times, skipping meals because we "indulged" earlier in the day, cutting out entire food groups.

Anybody who has heard conversations in the office when a birthday cake is presented to a colleague – "Oh, it's so naughty, I'll just have a sliver," or "No thanks, I'm cutting out sugar" – will realise how common these patterns of thinking are. Frankly, a lot of us are just plain weird about food. 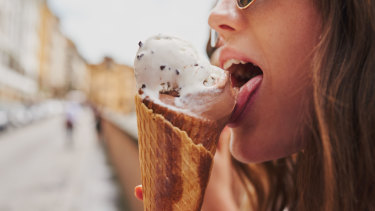 Laura Thomas: “People fear that they are going to lose control. Diet culture has taught us not to trust our bodies.”Credit:Stocksy

UK-based nutritionist Laura Thomas wants this to change. Her book Just Eat It examines intuitive eating and how it can be used to undo hang-ups about food. The book is a helpful tool for restricting "diet culture" – a pervasive phenomenon that, says Thomas, "upholds the thin ideal as the standard of beauty" – and not allowing it to rule our lives.

Intuitive eating, pioneered by US dietitians Evelyn Tribole and Elyse Resch in the mid-'90s, centres on principles that include honouring your hunger, respecting your body, making peace with food and rejecting a "diet mentality".

Thomas says when people adopt intuitive eating and stop spending so much time thinking about food, it makes more room for other things in their lives.

"Intuitive eating is a means to an end, not the end in and of itself," she says. "It's a tool for helping you reclaim peace around food, exercise and body image. Then you can focus on bigger issues, whether that's career, relationships, hobbies or social justice."

She uses real-life examples and offers strategies for how intuitive eating can create a healthier and happier relationship with food.

She invites readers to take an honest look at why they think a certain way about food; to learn how to recognise hunger and fullness and undo unhelpful black-and-white thinking around food (for instance, "chips are bad" followed by "oh no, I ate some chips so I might as well eat the whole family-size bag now").

It's also about unpacking emotional eating, busting food myths and giving yourself unconditional permission to eat whatever the heck you want.

"A lot of people have a fear that they are going to lose control and end up in free fall," says Thomas. "Diet culture has taught us not to trust our bodies but that doesn't mean that we can't."

"For instance, if you imagine what it would feel like after a day of eating nothing but brownies, you'd probably tell me that you would feel a bit gross and nauseous," says Thomas.

"Our bodies know what to do, it's our brains that need reminding."

She writes about finding body "neutrality". Not to be confused with its shoutier cousin body positivity, body neutrality isn't about having to love your body all of the time, which can feel like another thing we're failing at.

Instead, body neutrality means accepting what you look like and getting on with living your life.

Thomas doesn't say neutrality is better than positivity, but that it's a step along the way to giving your body the respect and compassion that it deserves.

"[Body neutrality] is a stepping stone for when body positivity feels too far out of reach," says Thomas. "The first step on that path is to raise awareness of how you speak to yourself and your body."

"Start noting down on your phone every time you say something mean to yourself or your body. Once you've got a better understanding of the extent of the problem, then you can start to challenge those thoughts and replace them with more neutral ones."

This article appears in Sunday Life magazine within the Sun-Herald and the Sunday Age on sale April 14.