A number of babies in Germany have been born with deformed hands, triggering a government investigation.

Authorities in the city of Gelsenkirchen, about 18 miles (30km) from Dortmund, are looking into possible causes of the birth defects.

Two children were born with underdeveloped fingers and palms on their left hands and another child had the same problems on their right hand.

The babies were all born at the Sankt Marien Hospital between June and September and were the first to have been born there with defects for ‘many years’.

Officials in the North Rhine-Westphalia state said the abnormalities were ‘conspicuous’ and they come after a government investigation was launched in France last year after dozens of babies were born with deformed limbs. 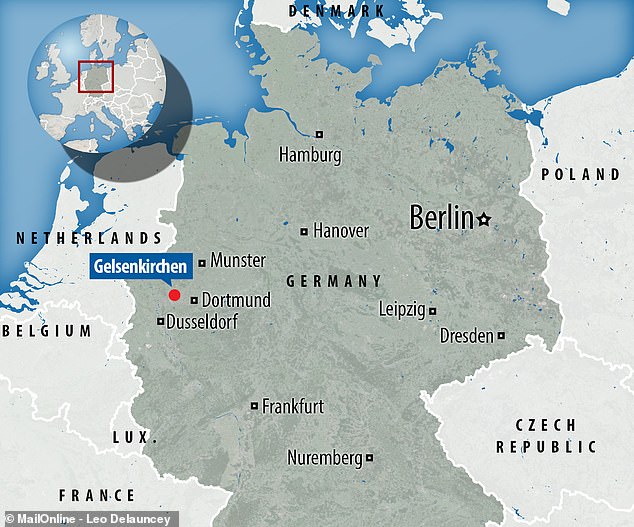 Three babies were born with deformed hands between June and September in the same hospital in Gelsenkirchen, 18 miles (30km) to the west of Dortmund, officials confirmed

Midwife Sonja Liggett-Igelmund was the first health worker to speak out about the strange cluster of cases.

She suggested more babies may have been born with similar problems in the past but gone unnoticed, German newspaper Süddeutsche Zeitung reported.

In a statement on its website the St Marien Hospital said: ‘In two of the affected children, the left hand was deformed – in normal forearm, the palms and fingers were rudimentary.

‘In one child, the right hand was affected – here, too, the palms and fingers were rudimentary in normal forearm.

‘We could not see any ethnic, cultural or social similarities of the families of origin. All families live in the local area.

Babies born with deformed arms or legs are described as having a congenital limb defect.

This happens when the limb doesn’t form properly in the uterus and can either be caused by factors outside of the mother or an internal illness or genetic disorder.

Most famously, the Thalidomide scandal, which came out in the 1960s, saw thousands of babies born with parts of their limbs missing or deformed because a drug had been prescribed as a morning sickness pill but later turned out to be toxic to unborn babies.

Exposure to too much alcohol or cigarette smoke while in the womb can cause birth defects.

And some chemicals, such as pesticides or fungicides used in farming, are known to be toxic to unborn babies and could cause problems if the mother spends a lot of time with them.

Viral infections in the mother or sexually transmitted diseases may also lead to development issues.

According to the Sankt Marien Hospital, between one and two per cent of babies are born with a deformity of some kind.

‘We have not seen malformations of this kind for many years. Multiple occurrences now may also be a random accumulation. However, we find the brief period in which we are now seeing these three cases striking.’

Health ministers in North Rhine-Westphalia will now ask around other clinics in the region to see if more cases appear, and look at past birth records.

In Süddeutsche Zeitung there has been speculation that deformities could be caused by infections, toxins, radiation or chemicals, but their causes are unknown.

The French health ministry last year began an investigation into a number of babies being born with undeveloped limbs.

In Ain, specifically – a town between Lyon and the Swiss border – at least seven babies were born deformed by 2014.

And there were unusually high numbers of cases in the eastern Rhônes-Alpes region between 2009 and 2017, according to France 24, and more than 20 cases were detected in Brittany in the past 15 years.

In these cases some children were born with entire limbs missing, but again no cause linking them together has been found.

The mother of one of the children, Aurelie Bingler, told Russia Today last year: ‘I want to know why she was born like that, because mothers blame themselves.’

The cases have echoes of the Thalidomide scandal, in which thousands of children were born with serious deformities after being given a morning sickness drug which later turned out to be toxic to unborn babies.