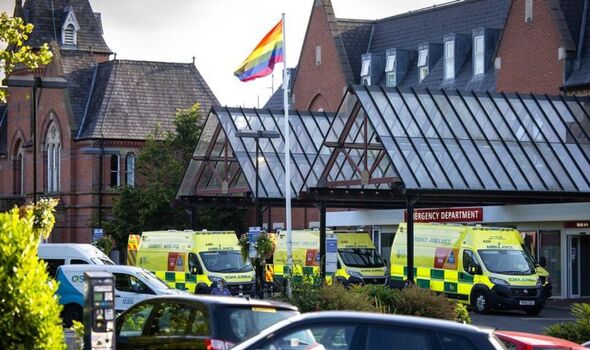 A hospital visitor has revealed the shocking state of an A&E department, with patients sitting in 13 hour-long queues to be triaged and corridors “piling up with beds”.

It is no secret that pressure is mounting on the NHS like never before.

A total of 539 patients were admitted to hospitals in Greater Manchester on Boxing Day alone, according to the most recent official NHS data, illustrating that patients were arriving at the hospitals faster than they could be discharged.

Available hospital beds in Greater Manchester are said to be almost full; the data shows occupancy is at around 98 per cent, with a tenth of all beds filled with Covid-positive patients, reports Manchester Evening News.

As NHS bosses issued an “urgent” plea to the public to stay away from A&E units amid what they called “unprecedented levels of attendance,” the M.E.N can reveal hospitals have been fluctuating between “internal alert levels,” activated to allow additional steps to be taken to maintain safe services for patients and help staff cope with growing pressures.

One source said January was usually the busiest time for the NHS, with spikes in demand expected, but said services were already starting the New Year “from a really challenging position”.

The NHS in Greater Manchester said the situation at A&Es was also being hampered by staff sickness and an “increased prevalence of flu”.

For the first time, bosses also urged people with flu-like or Covid symptoms in the new year to stay at home to protect the NHS and the general population.

One acute care professor said taken in its entirety, the situation has led to pressure “beyond anything we have experienced before”.

The NHS has also revealed:

Data from NHS England for the week to Sunday, December 18 showed delays getting ambulance patients into hospital for treatment are higher this month than during any previous winters.

Four in 10 ambulances arriving at A&E waited at least 30 minutes before unloading patients – up from three in 10 the previous week. The target time is 15 minutes.

Meanwhile, calls to 111 have increased to near-record levels as parents seek advice about strep A and the number of patients with flu in hospitals in England has gone up by two-thirds in one week.

The hospital visitor, who the M.E.N is not naming, was visiting a poorly relative at Tameside Hospital’s A&E department on Wednesday evening, as other hospitals spoke out to stress how busy their departments were and large numbers of ambulances were pictured queuing up outside entrances.

He praised the dedication and hard work of staff battling to free up space and treat those who needed it – but said many people simply did not need to be there.

Waiting times, he said, were 13 hours and rising.

“The corridors were piling with beds,” the visitor said.

“In the waiting room, it was full. The police were there trying to sort out a young girl who was clearly intoxicated or under the influence of drugs.

“She was kicking off and screaming and crying in the waiting area.

“The police came to try and keep the peace, they were trying to triage the girl to see how bad she was and if she needed medical help.

“When we left the resus ward hours later, the young woman was just unconscious and collapsed over a wheel chair waiting. I think she was just sleeping off her session.

“Also on the same night in the same waiting room two guys, again both under the influence, came into the waiting area.

“One guy was holding a bloody hand up. It looked like he just punched something and his knuckles were bleeding, but it had now stopped.

“The blood was dry and the wound had scabbed over. However he was walking in and out of the waiting area.

“His friend was sat in the corner near the door. He couldn’t control his legs and I think he was having drug-related convulsions.

“The guy with the bloody hand just needed to wash it under cold water and place a plaster onto the cut. Why do these people think non life and death injury needs A&E?

“People say the NHS is on its knees, but I think it’s just mis-used.

“If people used a pharmacy for basic first aid, and could actually see their GP easily, the A&E department wouldn’t be so concerned about the safety and high number of people trying to be seen.

“The staff are so hard working but I feel the public, and a lack of using the proper channels, are the ones making their jobs harder.”

The Manchester Evening News asked Tameside Hospital for comment, but were referred to an earlier issued Greater Manchester NHS statement.

Professor Jane Eddleston, Greater Manchester Medical Executive lead for acute care, said: “The first day back after the Christmas break is always busy for NHS services but today has been beyond anything we have experienced before.

“We are making an urgent plea to the public in Greater Manchester to only call 999 or attend Accident and Emergency departments if their condition is a life-threatening emergency.

“Unprecedented levels of attendance at A&E, staff sickness and increased prevalence of flu and covid have led to very long waits in emergency departments and for ambulances.

“We urge the public to use alternative services to make use of NHS 111 online and phone services (111 online is for people aged five and over).

“Accessing NHS 111 online, contacting your GP, or attending your local pharmacist will mean you get treatment much sooner.

“GP practices and pharmacies are open as normal between Christmas and new year.

“As we head into the new year we also urge anyone experiencing flu or Covid-like symptoms to stay at home, so that you do not pass on your infection on to others.

“Both can be serious illnesses, so please take the necessary precautions to protect your loved ones, particularly those who are vulnerable, including getting your vaccines if you are eligible.”

Mandy Philbin, Chief Nurse at Greater Manchester Integrated Care, said: “I would like to thank members of the public for their support during this busy time for the NHS, by considering how they access the NHS services, such as using NHS 111 online.

“We do however have to ask that this continues, as our hospitals are experiencing high levels of demand.

“To help us keep our A&E and other emergency services free for life-threatening emergencies, please only call 999 or attend the emergency department in a genuine emergency.

“Accessing NHS 111 online, contacting your GP, or attending your local pharmacist will mean you get treatment much sooner.

“Many illnesses and minor injuries can be treated at home, so I would also like to remind people to make sure they have ordered their repeat prescription if needed and have a well-stocked medicine cabinet.

“As the festive period continues and celebrations for new year begin, I would urge anyone experiencing flu or COVID-like symptoms to stay at home, so that you do not pass on your infection on to others.

“Both can be serious illnesses, so please take the necessary precautions to protect your loved ones, particularly those who are vulnerable, including getting your vaccines if you are eligible.”

A North West Ambulance Service spokesperson said: “The health service as a whole is currently dealing with a high number of patients.

“During these very busy periods, patient handovers can become a challenge.

“We continually monitor the situation and work closely with our hospital colleagues to help emergency crews clear as quickly possible to enable them to respond to other patients.

“As always, the public can assist by only calling 999 in life-threatening emergencies and considering other options including NHS 111 online, GPs and pharmacies for less urgent issues.”