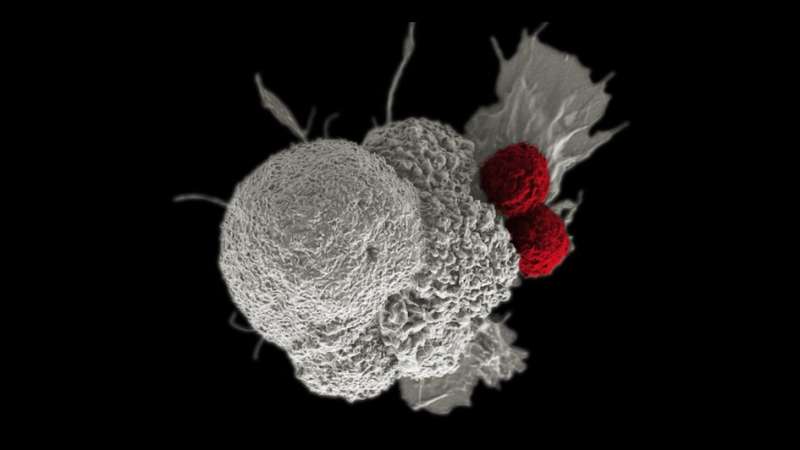 An immunotherapy combination could be better than standard “Extreme” chemotherapy as first-line treatment for some patients with relapsed or metastatic head and neck cancer, or both, a major phase III trial suggests.

The immunotherapies nivolumab and ipilimumab helped some patients with advanced head and neck cancer live longer, compared with “Extreme” standard treatment consisting of an aggressive cocktail of two chemotherapy drugs and a targeted antibody treatment.

The results were not statistically significant, but the immunotherapy combination, designed to spark the immune system into action against cancer, led to a positive trend in survival when compared to the “Extreme” standard in a group of patients—those with tumors that had high levels of an immune marker called PD-L1.

In fact, survival rates for patients with high levels of PD-L1 who received the immunotherapy combination were the highest ever reported in a first-line therapy trial of relapsed or metastatic head and neck cancer.

Researchers at The Institute of Cancer Research, London, The Royal Marsden NHS Foundation Trust and colleagues in Greece and the US, presented the latest data from the CheckMate 651 phase III trial, which involved 947 patients, at the European Society for Medical Oncology Virtual Congress (ESMO) last month.

Although the survival benefit did not reach statistical significance, those who received the immunotherapy treatments experienced fewer side effects, demonstrating their potential to improve patient’s quality of life.

Around 12,000 people in the UK are diagnosed with head and neck cancer and many will be diagnosed at advanced stages. There is an urgent need for better, kinder treatments for these patients than the current standard of care.

Patients who received the immunotherapy combination and had tumors with high levels of PD-L1 lived an average of three months longer than those who received Extreme chemotherapy. The median overall survival for these patients was 17.6 months—the highest average ever reported in this group of patients.

Immunotherapy is also a much kinder treatment option than Extreme chemotherapy, which comes along side effects such as nausea, pain, appetite loss, tiredness and breathing problems.

The study was funded by pharmaceutical company Bristol Myers Squibb.

A different trial known as CheckMate 141, led by researchers at The Institute of Cancer Research (ICR) and The Royal Marsden, showed the effectiveness of nivolumab alone in head and neck cancer and led to the approval of the immunotherapy by the US Food and Drug Administration and the European Medicines Agency back in 2016.

Patients did better than expected based on previous data

Researchers hope that future findings from the current CheckMate 651 trial will demonstrate further benefits of the new combination in patients with advanced head and neck cancer.

The researchers also pointed out that all patients in the study, including those in the control group who received Extreme chemotherapy, did better than expected based on previous data. They suggest that this makes a trend towards improved survival amongst patients who received immunotherapies more remarkable.

Professor Kevin Harrington, Professor of Biological Cancer Therapies at The Institute of Cancer Research, London, and Consultant Clinical Oncologist at The Royal Marsden NHS Foundation Trust, who was involved in the CheckMate 651 trial, said:

“Our findings point towards a positive trend in survival when using a new immunotherapy combination for patients with head and neck cancer whose tumors are positive for the PD-L1 immune marker. In this group of patients, combining the immunotherapies nivolumab and ipilimumab could be a better option than the standard “Extreme’ treatment, especially as it has fewer side effects..

“Our trial shows the immunotherapy combination achieved the longest median overall survival ever seen in patients with relapsed or metastatic head and neck cancer. Despite the lack of statistical significance, these results are clinically meaningful. We will need to do longer follow-up to see whether we can demonstrate a survival benefit across all patients in the trial.”

Sparing patients side effects of chemotherapy

Professor Kristian Helin, Chief Executive of The Institute of Cancer Research, London, said: “Immunotherapies are kinder, smarter treatments that can bring significant benefits to patients with advanced head and neck cancer—for example, by sparing them some of the difficult side effects of chemotherapy. These are promising results and demonstrate how we can better select the patients who are most likely to benefit from immunotherapy treatment.”

“I’m so fortunate they’ve continued to find treatment that works for me.”

After Barry Ambrose (77 from Bury St Edmunds) was diagnosed with throat cancer in 2017, which had also spread to his lungs, he was told by his local hospital palliative care was his only option. Barry was then given a second opinion at The Royal Marsden and joined the Checkmate 651 trial in August 2017, which caused the tumor in his throat to completely disappear. He stayed on the trial for almost two years and, as the cancer had started to progress, his treatment switched to chemotherapy followed by surgery. He currently has no evidence of disease. He said:

“When I was told about the trial by Professor Harrington, I didn’t hesitate to join—what did I have to lose? It turned out to be a lifeline. Although I had to make bi-weekly trips from Suffolk to the hospital for the treatment, I had virtually no side effects and was able to carry on as normal doing the things I love—sailing, cycling, and spending time with my family.