Out in the western deserts of Australia the rust red escarpments are festooned with yellow fins of honeycomb hanging like alabaster saints on cathedral walls. Apis mellifera. The European honeybee. No one really knows to what extent they disrupt natural pollination processes, nor what native fauna they replace. But since arrival they have behaved as if this extravagantly blossomed island was terra nullius. They are aggressive, dominant, indefatigable and everywhere.

And in the last decade they have colonised our cities through the age-old method of making themselves a fashion accessory for mid-life suburbans dreaming of a pastoral existence in a Constable landscape with cattle lowing and bees bumbling. Lately every wannabe tree-changeling has gone out and got a hive and become a tinpot apiarist.

I understand the emotional pay-off of homegrown produce. I know the earthy thrill that comes from a mouthful of your own silverbeet. It’s the same awe that first Levantine farmer felt as he leant on his wooden hoe peering in wonder at that first green shoot from a seed he’d planted himself. It worked. I am seasons. I am spring. I created this. I am God, bringer of life. What is not possible now?

But it’s hard to be a farmer in town. Plots are small. Pigs are illegal. Cows are impossible. Chooks are frail, mesmerising, and too lovable to exploit. But bees are virtually maintenance-free, have no known consciousness, and the moral conundrum of honey harvesting is so puny only a vegan would be vain enough to be perplexed by it. 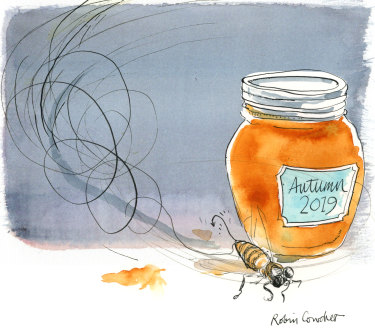 Better yet, bees wander into neighbours’ yards on a wing and a blithe Marxist attitude and collect the base metals of pollen and nectar, bring them home, and alchemise them into gold. Beekeeping in town is a magical free-for-all where property rights are annulled and suburban girl gangs steal the makings from parks, gardens and Mrs Smith next door, who will be injected with poison if she takes up arms against them.

Humans have used honey for thousands of years for its antibacterial properties, on wounds, for allergies, for embalming. The pharaohs took honey to their tombs to lay at the feet of their Gods and three thousand years later it was spread on the toast of bow-tied English archaeologists by their valets. Honey was harvested from the rooftop of Notre Dame until the recent fire. Honey is harvested off the roofs of office towers and nightclubs in the CBD. I bet Linda Dessau has a hive or so on Government House. Her hair looks styled for an apiarist’s helmet.

So many people keep bees now that honey has become the newest medium by which love can be measured. It has replaced both chutney and marmalade as a gift from the heart. It has swept lemon curd from the pantry shelves. What could be more profound than 380g of sweetly alchemized blossom glowing goldly in a Vegemite jar adorned by a friend’s handwritten label? You ought be humbled by that gift. That’s DIY ambrosia laid at your feet. If you want to find corruption, follow the money. If you want to find love, follow the honey. It’s an old Egyptian saying I made up. But it’s true. If your bestie Endora has a hive and is doling out the gold to Ella and Megan but not to you, it’s time for an intervention, a recalibration. Something is amiss.

My mother’s bees have been unproductive lately, she tells me. Not a trickle from the brutes. It’s a head-frying mystery to her, judging by her showy lamentations. "Not enough blossom? Too hot? A disease? Who knows? Will they ever produce again? The lazy things. I’ve half a mind to rattle their hive with a rake. No harvest for over a year." She creates a high sea in her brandy and soda as she casts her arms about in search of answers. She seems, almost, to blame herself. "I don’t know,’ I tell her. "Bees are a mystery to me." But honey isn’t.

I have been a bad son. But Jesus, by any measure the sisters have been worse. I was visiting a sister last week, looking in her pantry for sugar for my tea, and there sat a jar brazenly filtering gold light through its translucent belly, naked except for a fowlers label which read, “Autumn. 2019.” In the same hand that Santa once wrote labels on my Christmas presents. In the same hand the Tooth Fairy once thanked me for my beautiful teeth.