Like a lot of people, until very recently, most of my knowledge of hypnosis came from pop culture and involved a creepy older man swinging a pocket watch in front of a woman’s face in an attempt to control her mind — or at least get her to cluck like a chicken. But while that makes for an entertaining scene in a sitcom, it’s a major disservice to real-life hypnotherapists whose main objective is to help people.

Grace Smith falls into that category.

Admittedly, when I was initially offered a hypnotherapy session with Smith, my first instinct was to pass. But something made me do a quick Google search on her, during which I learned that she approached hypnotherapy from a human rights perspective. Even though I wasn’t quite sure what that meant, I was definitely intrigued and agreed to try a session.

“I’ve never seen such a direct application of a human rights issue,” she told me before our session. “People are suffering needlessly — because hypnosis works. It works every time. It works for everyone as long as they want it — all it has is a PR issue. It has swinging watches.”

But let’s back up for a second: What exactly is hypnosis, and why is it so misunderstood? 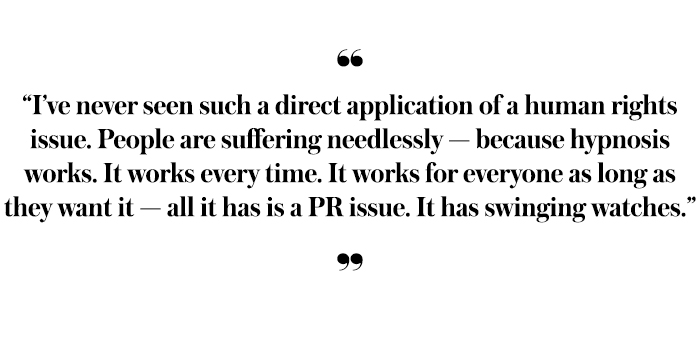 “Hypnosis is not sleep,” she tells SheKnows. “It’s not a blackout state where you don’t have thoughts and where you’re not sure where you are — there’s no amnesia, there’s no forgetting. And it’s not mind control.”

If we were to put sensors on our brain and map the course of a day, we would see a combination of beta, alpha, theta and delta waves, Smith says. Beta waves exist during a conscious, waking state, when we’re actively processing thoughts. Alpha waves occur when we’re daydreaming, and delta waves happen when we sleep. Hypnosis, she explains, takes place via theta waves. According to Smith, theta is our most resourceful, creative and adaptive state; it is when our inhibitions are decreased.

“Memory recall increases when we’re feeling safe and relaxed — when we’re in a meditative state,” Smith says. “Even from a forensic standpoint, hypnosis is being used more frequently because eyewitness recall is so historically inaccurate.”

Essentially, all hypnosis is, Smith notes, is going into the theta state — which we naturally go into and out of all day every day. This is why, she says, anyone can be hypnotized.

“I call hypnosis ‘meditation with a goal’ because meditation takes place at the same level,” Smith explains. 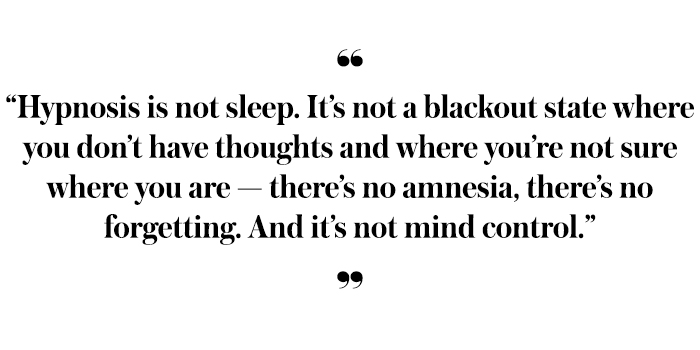 Hypnotherapy, by extension, is using hypnosis for therapeutic or healing purposes. (Again, not mind control.) Hypnosis also doesn’t trick your mind into giving you more willpower to quit something like sugar or smoking. Instead, Smith explains, it gets to the root of whatever is causing your problem, which is some combination of a lack of self-love, self-worth and/or self-confidence. Once those issues are addressed, she is able to work with clients to help overcome more specific problems, like insomnia or anxiety.

Though Smith typically does her sessions via Skype, she visited New York City, so I was fortunate to have the experience in person. When the day of the appointment rolled around, I was my usual ball of stress, anxiety and depression, but worse because I had gotten some bad health news about my mother earlier in the day. I was very tempted to cancel but decided that if nothing else, having some quiet time to escape from the reality of my day would be beneficial.

This meant that instead of focusing on a particular issue during our appointment — like quitting smoking or sugar or improving sleep quality — my time with Smith was more in a crisis-management context, where she gave me some tools to help me get through high-anxiety days like that one. She only sells her online hypnosis sessions in groups of 12, noting that it takes an average of six sessions to see a real change, and this way, she can work with clients on more than one area of their lives.

I won’t get into a play-by-play of what happened during our session, as they tend to be very personalized, but I’m happy to discuss the highlights. For starters, Smith was spot-on when she described hypnotherapy as a very focused guided meditation — and that’s exactly what it felt like. She had me close my eyes and, among other things, picture and then describe a staircase, then a door, then the scene outside the door where I felt calm, happy and at peace.

Without hesitation, I pictured a lush summer landscape on the coast of Prince Edward Island complete with a garden, trees, a red dirt path, cliffs, a breeze, the sea — the full Anne of Green Gables package. Basically, this:

Happy Canada Day to my favorite province, Prince Edward Island. Other kids wanted to go to Disney World. I couldn’t wait to visit the place I read about in Lucy Maud Montgomery’s books. And yes, it’s as beautiful as you imagine. #canadaday #lmmontgomery #princeedwardisland @tourismpei

Anyway, much of our session was spent visualizing these scenes and learning how to mentally transport myself there during times when I need a little serenity.

The next part dealt with the concept of calm confidence. Smith had me picture calm confidence as a person, but despite her help, I wasn’t able to do it. She would ask what the human version of calm confidence was saying to me, and honestly, I had no idea. This just wasn’t clicking the way my mental escape to Prince Edward Island did.

Smith then told me to imagine a glowing ball of yellow light between Julie Andrews’ two hands, into which she poured every ounce of her calm confidence. (And don’t worry — Smith also informed me that Julie Andrews has a limitless, self-generating supply of calm confidence, naturally, and wouldn’t be harmed by giving some to me.)

At this point, Smith counted down from three, then snapped her fingers (which was, honestly, the only part of the whole session that bore any resemblance to the hypnosis you see in pop culture) and told me to imagine swallowing Julie Andrews’ glowing ball of yellow light and calm confidence.

Finally, Smith ended the session by having me picture Julie Andrews hug me goodbye and wave as she floated off to go back where she came from, but leaving her calm confidence with me.

“Thanks, Julie Andrews; this feels great!” she had me say out loud as our time came to a close.

By the end of our time together, Smith felt like an old friend. I did feel significantly more relaxed than when I started, and the next day noticed that I was even more focused on my work than usual.

Because my session was more general anxiety/crisis management given the day I was having, I can’t turn around and say that I quit smoking or sugar or something else as tangible. But I can say that I do feel calmer than before and would definitely be open to additional sessions with her.

More than anything, though, I feel as though I came away with a better understanding of what hypnotherapy does — and does not — entail. Julie Andrews was a bonus.