Hundreds of people in the UK are paying for medicinal cannabis from private clinics, it has been reported.

However, only two patients – both of whom are children – are believed to have been given a prescription on the NHS.

This has driven patients with conditions like epilepsy and multiple sclerosis (MS) to pay up to £800 ($966) a month to get hold of the drug privately. 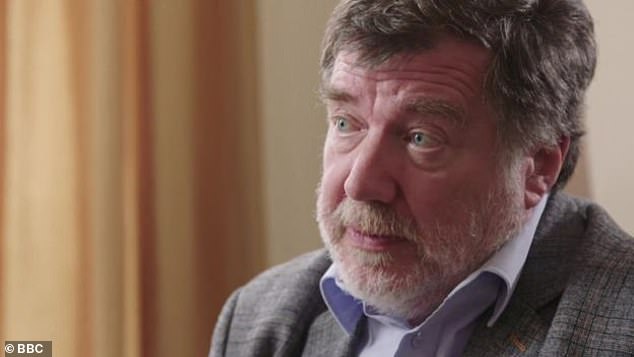 Professor Mike Barnes (pictured) is director of The Medical Cannabis Clinics. A branch is due to open in London over the next few weeks. He warned there is only evidence supporting medical cannabis’ effectiveness for conditions like pain, anxiety and epilepsy

Pharma company Grow Biotech is said to be responsible for around three quarters of all medical cannabis brought into the UK.

As of last month, the firm claimed to have had more than 100 requests for private prescriptions, of which 60 have been issued.

A branch of The Medical Cannabis Clinics is due to open in London within the next few weeks and already has 162 patients on its waiting list.

However, its director Professor Mike Barnes warned not everyone will be suitable for a prescription, the BBC reports.

There is only evidence supporting medical cannabis’ effectiveness for conditions like pain, anxiety, epilepsy and vomiting or nausea caused by chemo, he said.

Patients also have to have exhausted all other treatment options before cannabis will be considered, Professor Barnes added.

The clinic charges between £600 ($724) and £800 for a prescription. Professor Barnes argues this is the only way patients can get the ‘lifeline’ they need.

A mother told the BBC’s Victoria Derbyshire programme that her epileptic daughter has been refused medical cannabis twice. 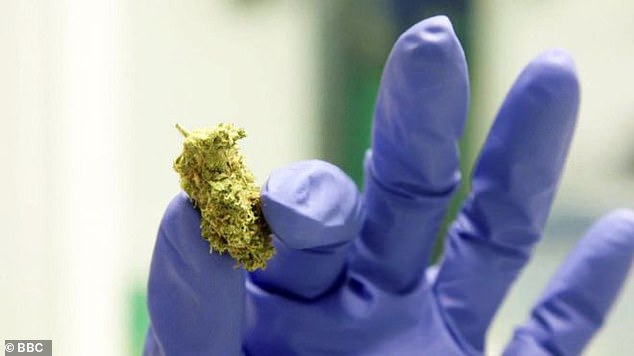 Cheryl Keen has been attempting to get the drug for her daughter Charlotte, who also has brain damage.

Ms Keen, who cannot afford to buy the prescription privately, claims she has been told medical cannabis is too expensive for doctors to give out.

Professor Barnes claimed in February that access to medicinal cannabis had been ‘appalling’ since it was legalised in November.

At the time, he claimed that only six patients had been given prescriptions – and none of them were on the NHS.

A mother claims her epileptic daughter has been refused medical cannabis twice.

Cheryl Keen has been attempting to get the drug for her daughter Charlotte, who also has brain damage.

Ms Keen, who cannot afford to buy the prescription privately, claims she has been told medical cannabis is too expensive for doctors to give out.

Medics have also said Charlotte has not yet tried all the other treatment options available to her, Ms Keen alleges.

‘Nothing has happened, nothing has changed [since the legalisation],’ she told the Victoria Derbyshire show.

‘It’s absolutely disgusting that anyone is having to pay to go private.’ 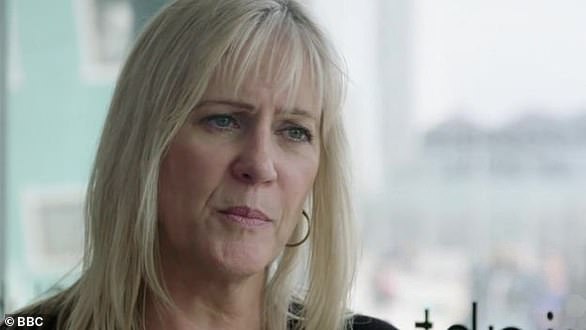 Cheryl Keen (pictured) claims her epileptic daughter has been refused medical cannabis twice. She cannot afford to pay for the prescription privately 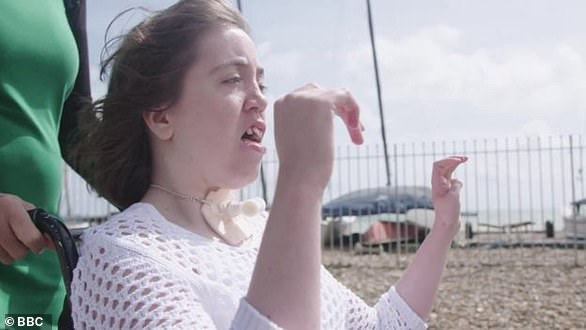 Her daughter Charlotte (pictured) also has brain damage. Doctors have allegedly said the prescription is too expensive and Charlotte has not tried all other treatments yet

In draft guidelines released earlier this month, health chiefs ruled cannabis should not be given to patients with MS or chronic pain.

And the National Institute for Health and Care Excellence said it couldn’t decide whether or not to approve it for children with rare forms of epilepsy because of a lack of evidence.

Cancer patients who are suffering from vomiting caused by chemo were the only group the body approved cannabis medicines for in its guidelines.

Up until November 1 the drug Sativex, which contains both CBD and THC, was the only medicinal-cannabis product licensed in the UK and was given to MS patients with spasticity.

The law change came about after the high-profile case of Alfie Dingley, whose extreme seizures stopped when the six-year-old took THC-based medication in the Netherlands.

Alfie’s mother Hannah Deacon previously called the legislation a ‘catastrophic failure’ and had even heard of one doctor who said he will ‘be sacked if he writes a prescription’.

Pro-cannabis campaign groups argue the NHS is limiting options for patients who could benefit from THC.

But non-medical cannabis – such as that sold on the street – can contain a host of contaminants and has an unknown strength.

Jon Liebling, the alliance’s political director, said in February that by not prescribing medical cannabis, doctors are making patients vulnerable to ‘the criminal market’.

He added he knew of just two medics who were willing and able to write these prescriptions.

Sir Mike Penning MP, co-chair of the All-Party Parliamentary Group on Medical Cannabis Under Prescription, said: ‘The stark reality is every day that goes by, these children not getting access to medical cannabis is a day too many.

‘It’s a day of suffering for the child, and unconscionable emotional and financial stress for the parents.’

Studies suggest cannabis can help reduce seizures in children with rare forms of epilepsy. Some parents also claim their children have benefited from illegal supplies.

In its own report, NHS England called for more clinical trials to be done to establish how effective cannabis really is.

A report by the Health and Social Care Committee last month claimed patients’ hopes were raised when the law change came about.

Labour MP and committee member Ben Bradshaw suggested medical cannabis is more difficult to get hold of than ever and the Government must ‘deliver on its promises’.

The parents of 39 children with intractable epilepsy, which cannot be controlled, wrote an open letter earlier this year called for a change of guidelines.

This came after 17 children with the condition were denied prescriptions despite campaigners fighting for their right to the drug in the movement End Our Pain, its director Peter Carroll said.

Alfie Dingley was part of the campaign. As of February, he was one of just six children Professor Barnes knew to have been given medicinal cannabis since the law change.

Before the legislation came into effect, his mother claims one doctor told her ‘if you talk to me about cannabis again I’ll report you to social services’.

It then took eight doctors to complete the administrative procedures required to get Alfie the drug, which Ms Deacon compared to ‘trying to import plutonium’.

Doctors then asked Ms Deacon to switch Alfie back to cannabidiol (CBD) products without THC, which she called ‘unethical’.

CBD is a component of cannabis that has never been restricted in the UK and is even available on the high street as an oil or spray.

Products that contain both CBD and THC may be prepared from cannabis-plant material.

Examples include Bedrocan, Bedrobinol, Bediol, Bedica, and Bedrolite, which are all made by the pharma company Bedrocan in the Netherlands.

A spokesperson from the Department of Health claimed it has asked NICE to develop new guidelines.

They added the decision to prescribe unlicensed cannabis for medical use lies with specialist doctors.

THE LANDMARK CASE OF BILLY CALDWELL

The 12-year-old sparked a row over the medicinal status of the oil, prompting the Home Office to step in and grant his mother Charlotte an emergency licence for the product that was calming his seizures, which contained THC.

Billy’s bottles were confiscated on June 11 after Ms Caldwell brought them in from Toronto.

On the back of the cases of Billy and fellow epileptic boy Alfie Dingley, six, Home Secretary Sajid Javid called for a review into medicinal cannabis.

In a major shift of policy, he announced in July that some products containing the drug would be available on prescription in the UK from the autumn.

On the back of today’s change to the law, Ms Caldwell said she wept with joy.

‘For me what started off as a journey which was about the needs of my little boy actually turned into something, proved to be something, a lot bigger,’ she told Sky News.

‘It proved to be the needs of a nation.

‘Only relatively recently did our Government and country really start to appreciate just how many wee children and people of all ages were affected by the difficulties associated with accessing medicinal cannabis.

‘But it became clear it wasn’t just about what was perceived to be a small number of very sick children and that medicinal cannabis could make a life-changing or life-saving difference to more than a million people.’

Although thrilled by the law change, Ms Caldwell hopes regulations will be expanded to allow more people to benefit from cannabis-based treatments.

‘This is new ground for everybody. We did in a few days what successive UK governments failed to do in more than half a century and made medicinal cannabis legal,’ she said.

‘Then, as now, politicians didn’t realise the complexities involved.

‘There’s a wide range of conditions, each of which can only be treated by certain forms of medicinal cannabis.’