For many of us, bread and butter are among life’s greatest pleasures. But, depending on how we eat the pairing – and how often – it may be harmful to our heart health.

Cardiovascular disease is the leading cause of death in Australia and up to 80 per cent of cases are preventable through lifestyle changes, including diet. 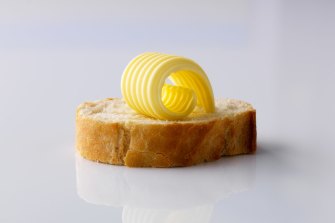 How we eat our bread and butter matters for heart health.

But, studies on the link between diet and health are often flawed and bewildering. Typically, studies focus on single nutrients, like sugar or fat, in an attempt to isolate dietary contributors to a health issue. This has led to dietary guidelines around the world that, in turn, focus on these nutrients and a food industry that profits by labelling products “low in” this nutrient or having “no added” that.

Trying to keep up with which nutrient we ought to be avoiding can be confusing and frustrating, as demonstrated by backflips on fat and artificial sweeteners, not to mention consumer fear about the sugar in fruit.

The problem, of course, is that we don’t eat single nutrients in isolation.

A new study, by researchers from Oxford University and the University of Western Australia, has attempted to address this by exploring how dietary patterns affect cardiovascular disease risk.

For the observational study, published in the journal BMC Medicine, 116,806 British adults answered questions about what they had eaten the previous day. The participants, with an average age of 56, did this two to five times over the course of a year to give the researchers a better idea of their eating patterns. Five years later, the researchers compared these patterns with hospitalised cases of cardiovascular disease and deaths by any cause.

They found that two eating patterns were most associated. The first was high in chocolate, lollies, white bread and butter, but low in fresh fruit and vegetables, and was linked to a 40 per cent increased risk of cardiovascular disease and death. The second diet, high in sugary drinks, fruit juice, table sugar and jam but low in butter and cheese, was related to an increased risk of about 10 per cent.

While it may seem obvious that a diet high in sweets, white bread and butter might result in health problems, what the research highlights is that context, quality and quantity are equally important.

Researchers have spent years debating the effects of saturated fat on heart disease. The fat comes in many forms, including in white chocolate, cashews, cheese, steak, potato chips and butter. In this latest study, butter intake was high in the first group but low in the second group, which also had poor outcomes.

It’s not entirely clear why, but what is certain is that what we are eating our butter alongside matters.

“Our research still confirms that saturated fat is important for cardiovascular disease, but our results need to be kept in the context of the whole diet,” says lead researcher, Carmen Piernas of Oxford University.

“The most important point is to get people thinking about reducing the amount of chocolate confectionary, butter and white bread they eat, instead of reducing sugars or saturated fat.”

Margaret Allman-Farinelli is a professor of dietetics at the University of Sydney. She points out that no one was eating a tub of butter on its own. The synergy of the foods together makes the difference.

“We don’t want to isolate bread and butter rather it is the overall pattern here,” says Allman-Farinelli, who was not involved in the study.

Dr Alan Barclay, a dietitian and the chief scientific officer at the Glycemic Index Foundation, says blanket statements about foods don’t account for differences in quality.

For instance, though people in the first group were eating a lot of bread, butter and chocolate the quality of those foods can vary significantly and can therefore affect our health differently.

“Those white, fluffy breads that melt in your mouth … break down into glucose before they even get to your tummy,” he explains.

Even chocolate can vary in its sugar and cocoa butter content, making Dairy Milk very different to a high quality dark chocolate.

“There are all sorts of nuances that aren’t captured [in studies],” says Barclay, who suggests opting for good quality bread with extra virgin olive oil or avocado while still limiting butter and chocolate of any sort.

Though it’s easy to demonise certain foods, most of us can eat anything in moderation without having to worry about the effect on our health. The reason for this is simple: quantity – and frequency – is key.

The trouble with many processed, high-energy foods however is that they are designed to make us want more. This is in part because they appeal to our genetic predisposition for fat, salt and sugar and because the absence of nutrients means our body keeps sending us signals to eat.

Although processed foods can make moderation hard, we can counter this by stocking up on the good stuff, so we’re not as hungry for junk.

Professor Garry Jennings, chief medical adviser at the Heart Foundation, says that a healthy heart diet involves eating plenty of fruit, vegetables, seeds and nuts. He says some fish and lean meat is fine too, and adds that dairy, like yoghurt and cheese, seems to be “fairly neutral”.

“I think to some extent, the public have been driven away from a fairly simple view of nutrition that is get as much variety as you can with more of the good things than the bad things.”

Get a little more outta life

Start your week with practical tips and expert advice to help you make the most of your personal health, relationships, fitness and nutrition. Sign up to our Live Well newsletter sent every Monday.